Can anyone think of a decent front bicycle rack?

I'm wanting to set up a rack on the front of my truck to make room in the bed for other things when needed. Something like this: 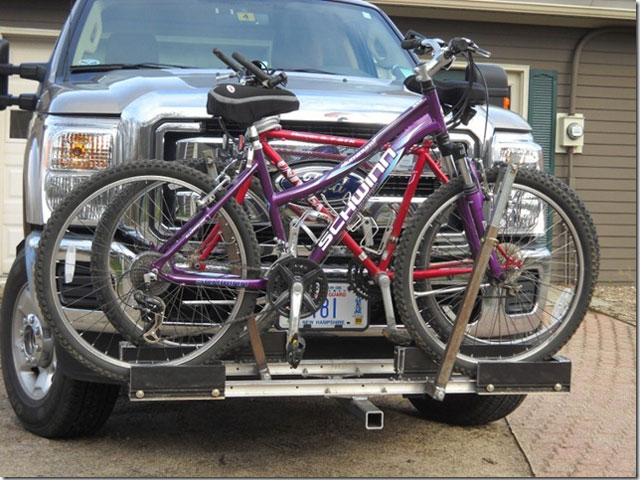 This guy appears to be using a front receiver hitch. However, I'm wanting to make some adjustments to improve visibility of the headlights, turn signals, etc. I may build my own for the custom positioning of the bike. I guess the first thing to address is the law. Where would I find the laws about accessories such as this?

Let me get this straight. A guy's got the Brodozer 3/4-ton $50,000 Ford and can't give up a little bed space for a couple bikes? Can't shove them in the back of the crew cab? <sigh> And he builds a custom carrier to haul around a 1980's Univega and big box store Schwinn worth maybe $200 total.

Oy vey! 'Why' did he buy a pickup to begin with? I thought that's what the bed was for...cargo.

I will say this, his home made carrier looks pretty bomb proof.

Almost any rear bike rack that is a receiver mount will work on a front receiver. And they do make adjustable height plug-in adapters.

Designed it so as not to block the headlights: http://home.comcast.net/~netboy/#BikeRack

I would still want a swing-away so as to allow better access to the engine compartment (step ladder required).

Laws? All the metro buses around here have pedestrian-killing front bike racks mounted on them...you know...for people that like to take their bikes for a ride. On the bus.

All the oil workers' trucks have those huge, badass bumpers on them...how much worse could a couple of flimsy bikes be? We have semi tractors running 'roo guards and all kinds of front winches on pickups so I'ld think barring some local jive law you should be good to go.

You are right about a truck is to carry stuff, but if there is already multiple weighty items that can damage the bike, what now? What if I'm carrying shooting houses to the hunting club and want to do some scouting on the bike? What if I'm towing the RV to the Auburn game and plan to cycle aroud campus? I both cases, there's no room in the bed, and my particular truck has no back seat.

Shooting houses? As in trap houses? Good for you! Are you building them for the club?

I haul the bigger stuff on a trailer if I have to, but I can still load two bikes safely on either side of a Harley and still have room to stash a bunch of stuff in the cab and bed. I'm a recovering tool junkie and when I go out to do a job...any job...I have a tendency to haul enough tools to restore a 1921 Pierce-Arrow AND install BB86 bearings in a frame.

Bumper towing a trailer shouldn't have enough tongue weight or loading/unloading restrictions to stop a guy from hauling the bikes in the bed on one of those simple and easy bar racks that use the fork to lock the bike in place. A 5th wheel? yeah, there goes most of the bed space right now. Not much can be used if that's the case.

Even a slide in camper should have enough open space in the aisle to carry the bikes safely and out of the weather (Noted: Alabama has WAY better winters than Ohio!).

I like the newer travel trailers and Class 'A' motorhomes that have built-in toy boxes for a fella's guns, motorbikes and ATV's/UTV's in them and that may be my next move as retirement looms on the horizon.

Here's some more ideas for you, including a Tundra with a front mounted Swagman rack: http://www.truckcampermagazine.com/weekly-blog/bike-solutions-for-truck-campers Lots of pics of front mounted rigs on this page to get some ideas from.

I think the weirdest thing I've seen was some obviously well-to-do old retired coot that had a Prevost class bus type motorhome. He was towing an enclosed trailer toy box that was about a mile long (probably had an SUV, a motocycle, an ATV AND a boat in there!). Even with all the money and room inside a setup that was longer than a Great Plains Peterbilt dragging a 53' van trailer behind it. he still had a couple of bikes lashed to the roof ladder of the trailer.

Headlight blocking and driver vision obstruction seem to be the biggest gripes with a front rack. A pair of auxiliary headlights would solve the lighting issue and be useful even when not hauling the bikes up front.

An F-450 quad cab...a 34' 5th-wheel and he still needs to block his lights and make driving like looking through a bike shop...

Thule also makes adjustable height 6' long cross bars for trucks. These will accept their bike carrier rails and locks and other Thule hardware. These would keep your bikes above most cargo in the bed and lower for unloading if the bed were empty. Not cheap at $600 + the bike components (maybe another $400-$500), but an option to consider:

Call me wierd,but I hate having stuff on the side of my vehicle like Sanford & Son. ...nevertheless, my logic processor is running, and I have some ideas of my own. (Holding that bike up to the front of m truck shows me a lot right there.) ...though the first thing I would do on that F450 is move that bike down a foot or so. I drive a Ranger, and I still think I can keep my bike more out of the way than that.

I have the basic form of my upper mounts formed in PVC pipe. While I think it's plenty sturdy, I'll still produce metal versions. Additionally, I am fiding that with the bike in the bed, it's bending the rims gradually. That gives me another excuse to make this rack.

why not a rear hitch? you can still use the bed of the truck fully.

Ok, Froze. I guess I either have to leave the bike at home, or the RV/boat/trailer. Post #3 pretty much covers ths reasons aganst a rear rack.

Ok, Froze. I guess I either have to leave the bike at home, or the RV/boat/trailer. Post #3 pretty much covers ths reasons aganst a rear rack.
Click to expand...

I can't tell from your post what you're doing. All you say is that you need your bed of your truck for other things, a trailer hitch solves that problem. If however you are also hauling a boat or trailer with the trailer hitch then that could cause a problem, however there are bike racks that can be put on the back of most trailers, any RV store can help you with that. If you're hauling a boat they do make some limited things that work for that too, see: http://www.etrailer.com/question-68595.html

I see the hanging rack, but is it a pass-through hitch? Otherwise, we're back at the start. What would a bicycle rack be under in the law? I'm finding a whole lot of nothing.
You must log in or register to reply here.

O
can anyone suggest a decent MTB trail/s near Melb - or a website to find this info?

V
Anyone got tips to reduce chaffing

It could be just my obsessiveness talking, but i'm going with anyone but her.