You are using an out of date browser. It may not display this or other websites correctly.
You should upgrade or use an alternative browser.
R 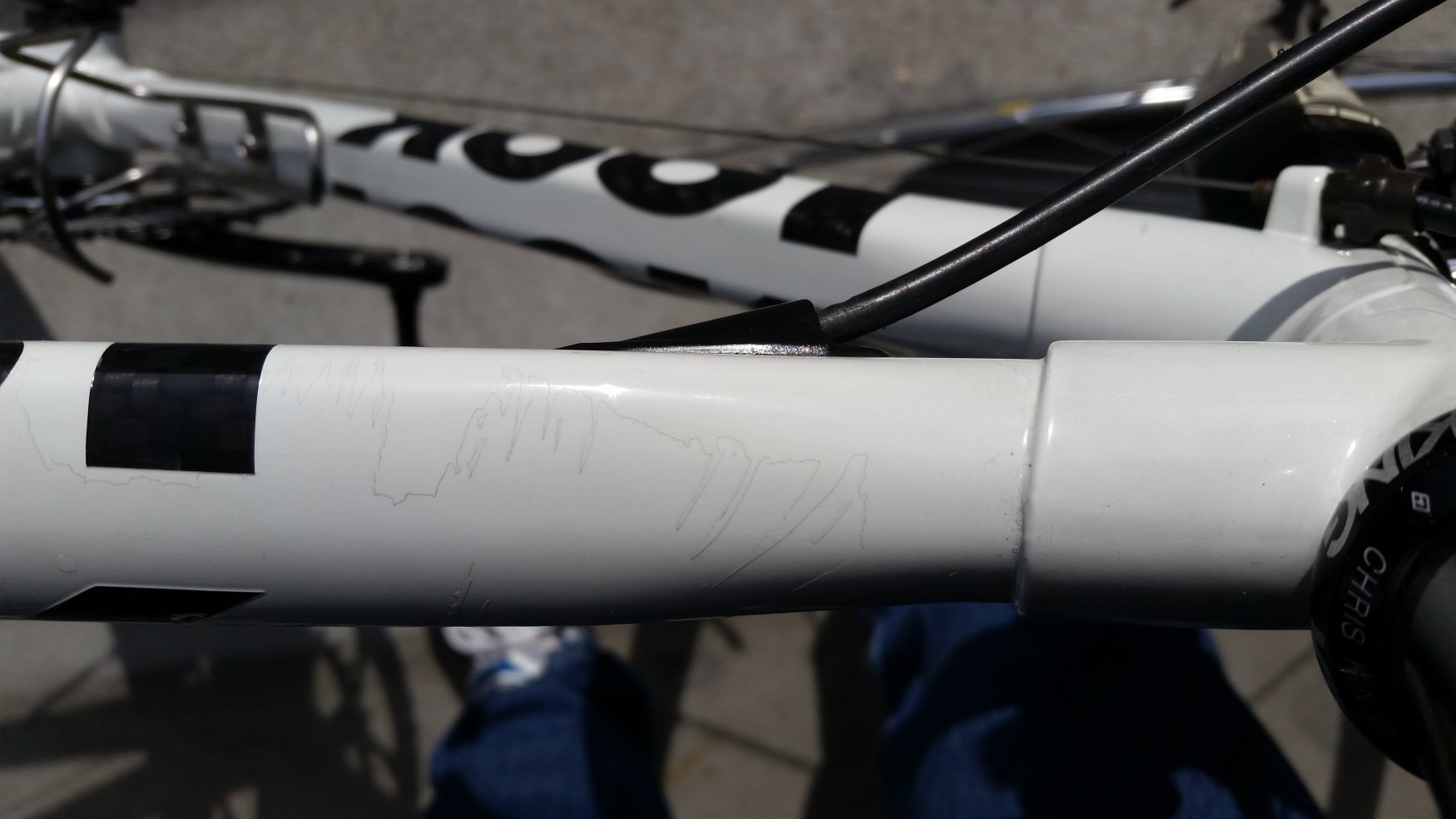 I recently had back and wrist surgery so I'm off the bike for a couple of months. In the mean time, I'm cleaning a friend's carbon frame Look bike. While waxing the frame, I felt a ripple in the paint on the top tube near the front lug. I then found these strange lines in the ripples. I advised the friend that he needed to take the bike to a LBS to have the frame inspected. Do these look like cracks in the frame? Thanks in advance for all the help.
U

Looks like peeled paint to me, I'm no expert though. Maybe it was scrubbed with too abrasive a surface.

I agree with Uawadall. It appears to be a paint issue to me. Maybe a base coat/clear coat lifting problem? A simple dye penetrant test would tell the tale between paint issue and cracking/delaminating of the carbon and/or resin.

Look has a 5 year warranty IIRC. Your friend would be given a new frame if it is really a crack and perhaps given a healthy discount towards a new frameset if it is a paint defect. You never know unless you ask and maybe get the factory district representative involved.
R

Ok, thanks for the info. I'll let him know. Ride safe!

I'm really struggling to envision a material that would let a crack propagate in that pattern.
My assumption would be something else than a structural crack.
R

My buddy is taking the bike to a LBS to have the frame inspected this weekend. I'll post the results as soon as I hear the results. Thanks again!

Still probably best to check it though.

Strange. Wonder if it's impact damage? Looks to me like the top tube may have been hit with something, or the bike fell over against a post. Will be curious to hear what the dealer says.
R

I apologize for the late response. My buddy was slow in getting his bike inspected and getting back to me. Anyway, the LBS inspected the frame and he did not find any cracks in the frame. The mechanic said it was the clear coat and paint. According to my buddy, the mechanic retouched the paint and clear coat on the top tube. I haven't seen the bike yet so I have no idea what it looks like now. Thanks again for all your replies!
Reactions: Uawadall

Hey, at least you followed up. A lot of posters (bots, mainly) ask questions or seek advice and never return with so much as a hearty GFY.

I'm glad it was just a paint/cosmetic issue.
W

I broke my Felt AR1 seat stay on Paris Brest Paris. Calfee fixed it for around $450 including shipping costs all in. You have to look carefully to see the repair and it rides fine. Was it worth it to have fixed? It is a $2500 frame. If it were a $700 Dengfu frame, I would probably have punted.

Whenever you see something unusual with CF stuff you should always error on the side of caution and have a professional look at it, it's better to be safe than sorry, if that had been a crack forming or delamination going on and your friend rode it dismissing it as just a paint issue it could have broken fast and sudden without warning and the resulting crash could have been very bad for the rider.

Agree to have it looked at. But on the other hand, I wouldn't be afraid to ride it either. The key is to pay attention to any creaking or new noise, or any feeling of looseness in the handling. Any quality CF tube should start giving off signs of impending failure long before it comes apart at the seams. Still would like to know what whacked the top tube there.....my guess is that the bike fell over and contacted a post, or something fell on it in the garage.

Fork damage is the only place I'd really get worried. The fork sees some high bending loads in normal riding, just from sitting on the bike, and lot's more on rough roads and potholes. And it's a critical part of the frame. Stay alert to what the bike is doing goes a long way to insuring our safety.

Never seen CF fail on the road, but I have seen a guy ride with a totally separated chainstay (NDS, right at the BB shell) and not really notice it. We were in a paceline on the flats when I noticed his rear wheel was wobbling....like the skewer was loose. When I got along side to tell him, found the weld completely broken and the chainstay moving back/forth about 1/2 inch. He was shocked when he looked down. We assured him he could make it back 5 miles to the car at low speed, then left him on the road in the time-honored tradition of club hammerheads out on the Sunday paceline ride.