Riding a bike in Cleveland traffic takes skill and brass. A video report is at the link.

CLE bike lane battle now viral, engineers across the country say they would set them up differently
Other engineers say CLE bike lanes are backwards

CLEVELAND - It's been a battle that has been brewing for a few months: Are Cleveland's new bike lanes set-up backwards?
Some engineers across the country say yes.

Engineers from Atlanta, Denver, Indianapolis and other cities are commenting that Cleveland's bike lane arrangement isn't something they would use. The engineers comments posted on-line stated they would put the buffer zone between traffic and the bike lane.


The comments posted in a national web story by People for Bikes on Nov. 12.

Rob Thompson with Bike Cleveland told newsnet5.com he and this organization have been insisting the bike lanes in Cleveland are set up wrong. Thompson and others believe the buffer zone should have been set-up between the traffic and bike lane.


Right now the bike lanes arranged by Cleveland city engineer Andy Cross have the bike lane situated right next to traffic.
Thompson believes it's a situation that is not as safe and doesn't promote newer riders, because they simply won't feel as comfortable with the traffic right next to them.


"We've all heard about distracted drivers, and people texting and driving these days," said Thompson.
"People are not always paying attention, you see it every day when you drive. People swerving in their lanes, so we do think it's a safety concern."


In response to our story newsnet5.com was issued a statement from the city of Cleveland backing-up the city bike lane design:

"Buffered bike lanes are put on city streets when Engineering decides that doing so will be safe for cyclists. The city recognizes that cyclists may feel safer with a buffered bike lane between cars and bikes; however, our engineers have determined that is not the case for West 25th street.


The reason we did not put in a left-side buffer on West 25th is that there are numerous consecutive intersections leading up to a very complex intersection.

A buffered bike lane between the cyclist and cars would encourage hook turns across the path of cyclists. The city will not jeopardize the safety of our cyclists to create bike infrastructure that gives the illusion of safety. "

Local bike groups are still hoping the bike lane will be changed, placing the buffer zone in between riders and traffic. 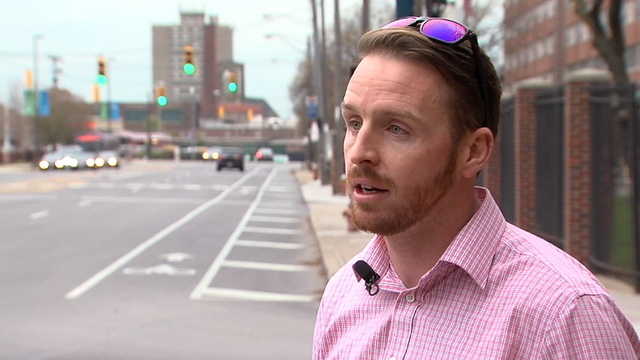 And most importantly...why is there some dude with an Australian accent explaining American bike lane policy?

I'd honestly be a little scared to ride like this. I mean, I rarely ride through areas with busy traffic, but still. How does it make sense to have buffer between sidewalk and the bike lane? Who does it protect? Not cyclists, that's for sure.

I have written Detroit as my home town on FB.

At least they shoot some nice trillers there From time to time. Robocop was cool too.

Whats next? No parked cars, motorcycles and dumpsters too? Real pavement? .

The streets are made from real street! 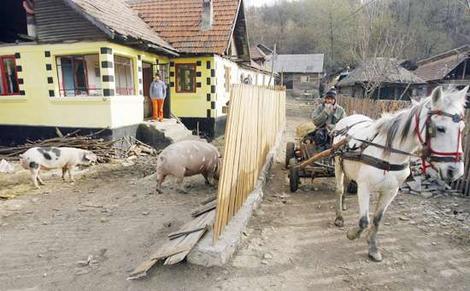 I thought this was an old thread about Grover Cleveland that JS" Graverobber" Win had dug up.

Well, Clevetown does have a Detroit Avenue. I think maybe 5 or 6 cyclists get hit on it every year.

I hate the bike lanes near me. Situated right next to the curb and always full of road junk and glass. I nearly always ride on the edge of traffic because of that.

I kinda like those bike lanes in the article above.

Virtually no bike lanes in this region. Having rode in virtually every corner of Metro Detroit, the only place with a significant number of bike lanes is Ann Arbor/Ypsilanti - which makes sense given the roughly 65,000 students at the two major universities, U of M and Eastern Michigan. Other communities have s smattering here and there. We have "bike routes" in some jurisdictions - signs that exist I guess to encourage cyclists to use certain roads and to warn motorists - but honestly not really sure what that really does. I only know of one road with a bike lane within a 10 mile radius of my house, a reconstructed in 2014 high volume terminus end of a freeway that transitions to 8 lane boulevard with turnarounds - the last two miles, once the freeway ends and there are intersections and commercial buildings, now has bike lanes - no buffer zone just as in Cleveland.

Cyclists here have no choice but ride the roads if there are no rideable or legal sidewalks/safety paths.

Looking at the bike lanes I tend to agree that if they're lucky enough to have a buffer zone, these in the UK don't, then you would expect it to be on the traffic side rather than the kerbside.

I'm not sure how much damage a passing pedestrian will cause to a cyclist so maybe a rethink is in order.
You must log in or register to reply here.

Fat Bikes in the Cleveland snow