Cost for a race team

Froze said:
Just as you said the bikes look virtually the same so the cost to manufacture them is low, very low, and so is the technology used, thus the reason for the high profits that Giant makes; Honda's profits are a lot lower but the technology is a lot greater, so if Honda was to sell their MC's at cost that could see a billion dollar profit then Honda wouldn't be selling many motorcycles because they would cost about $80,000 a piece depending on models and options of course, which is why bicycle manufactures can charge a lot because they can get away with and MC manufacturer's cannot and thus the profit margins are lower.

In addition to that 3D printers are now beginning to make bicycle frames which will make them a whole lot cheaper which won't reduce the prices for us it will just increase profits for them.

And there is no need for you to ramble on and on about stuff that isn't pertinent to our discussion which you seem to do a lot of. Mech shifting and tiredness equals elect shifting; cranks with strain gauges, aero wheel speed, 10 speed cassettes being the thing of of the past, all nonsense that has nothing to do with our discussion. I find the 10 speed cass comment odd since Shimano, Sunrace and IRD still make 5, 6 and 7 speed freewheel clusters, so I seriously doubt with all the bikes that have 10 speed cass still on the road that companies will stop making them and the warehouse supplies will just dry up and blow away. Now you have me rambling!

Now on to inflation, something as you say you think you know about me that I know nothing about. Below is a graph of the inflation, apparently the largest inflation period was from 1970 to 1979 at 7.06. Who was the president that started that? Nixon, and do you know what Nixon did to create that situation? I'll let you get back to me on that one because you're the expert and I'm just a flunky. Apparently during Obama's reign it was just 3.22%...BUT, Obama debt caused inflation hasn't caught up with us yet, but it will (and when it does Trump will get the blame), but for our discussion it hasn't yet, thus your argument is a moot point. 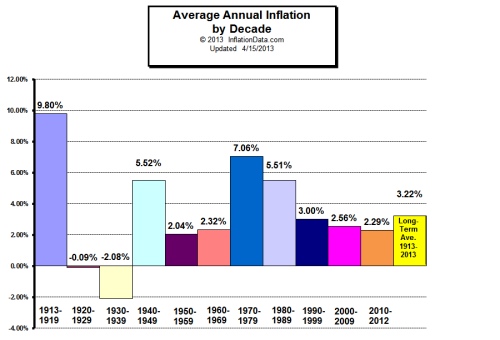 Do you know what a three-D printer is and how it works? They won't be building race bikes in that manner though possibly kids bikes that won't be loaded very heavily.

cyclintom said:
Do you know what a three-D printer is and how it works? They won't be building race bikes in that manner though possibly kids bikes that won't be loaded very heavily.
Click to expand...

I think you'll find yourself to be completely incorrect about this; 3D printing of bicycles is already getting ready for prime time and it will be all sorts of bikes and eventually even professional racing bikes and custom made bikes, all of which are a far cry from children bikes.

This is where it's going: https://roadcyclinguk.com/gear/gear-features/3d-printing-future-custom-bike-building/

And this how weird it can go: http://qeprize.org/createthefuture/arc-bicycle-worlds-first-3d-printed-steel-bicycle-frame/

Froze said:
3D printing of bicycles is already getting ready for prime time
Click to expand...

It's only a mater of time. Robotic production cutting of the carbon fabric used in conventional carbon frame manufacture has been the norm for over a decade. Robotic assembly of those pieces along with prepreg and resin is advancing rapidly. Printing will follow on soon enough.
You must log in or register to reply here.

Which brand of cycling Jerseys is the best cost-effectiveness?

▓▒░ 4 years on a bike. what the cost?

Why book selling in Amazon cost only $0.01

A low-cost city bike in London

Cost for a handbuilt wheel