Did You Ride Today?

I'll be honest, I wore the mask around my chin because there is nobody around. I used it to pose for the pics because I have a cousin that works for our county and she's always after me to wear one on my rides. 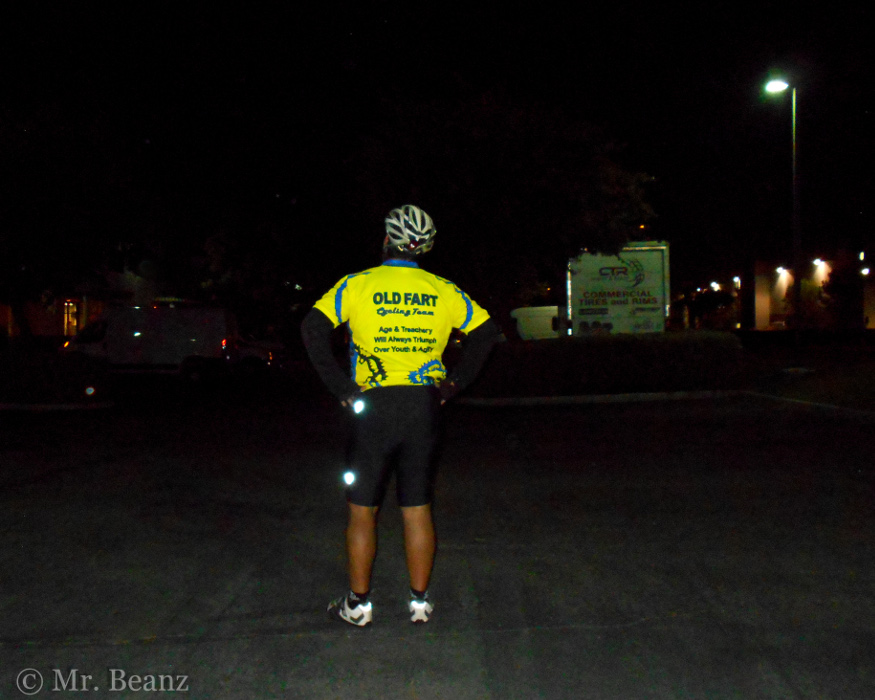 Yes I did! A short 11 mile ride late night around the industrial center again. Headset seemed to work loose after 6 years so I made the adjustment then took it for a test ride. Ahhh nice and smoooooth again.

Nice easy ride in the cool refreshing air. The dirty coppers drove by slowing taking a look at me. Yes, I have my mask Mister!

Somebody had asked how I take my own pic of myself riding. Of course everybody takes pics with cellphones but not me. I use a small point and shoot camera ($75 cheap model Nikon) and the little itty bitty tripod clipped on my jersey zipper. I don't usually carry it there, just for the pic for the dude who asked the question. Only about 3 inches but it was free and it works rather well. 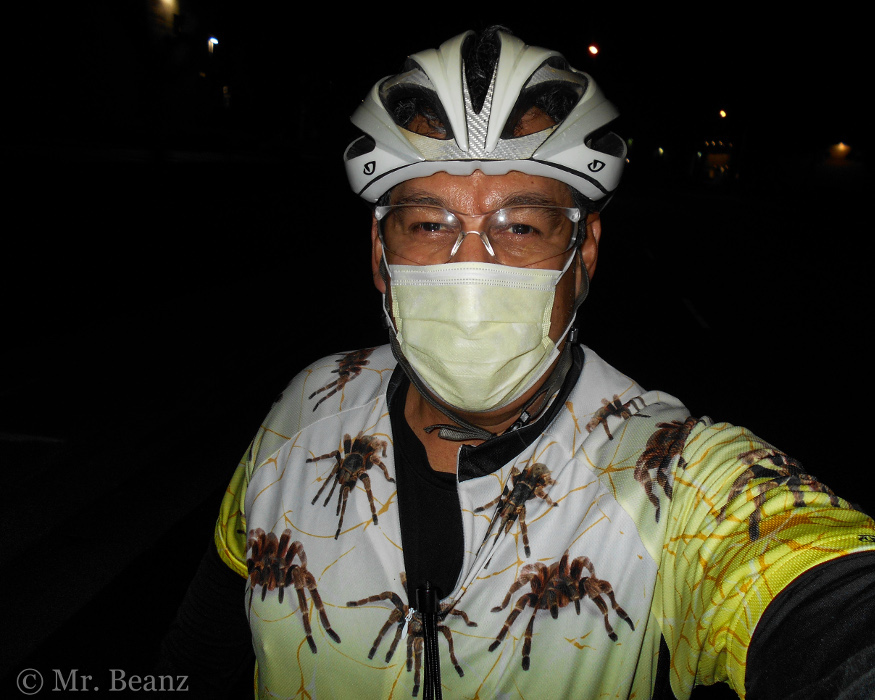 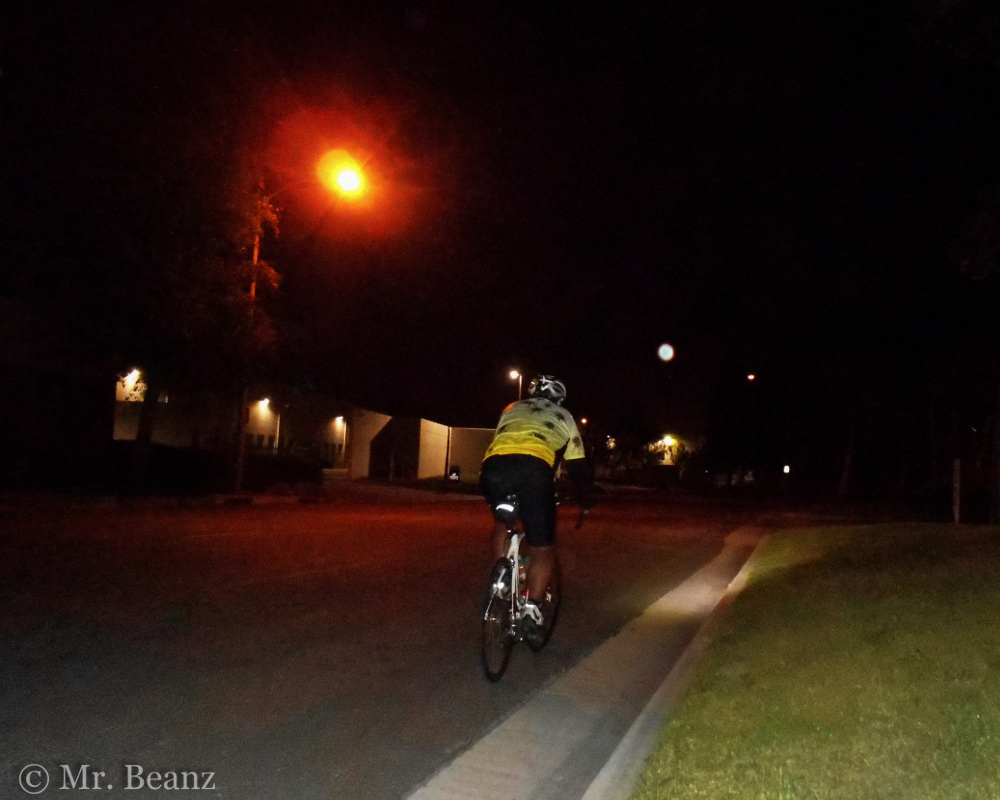 Yes! But what the heck is going on with the wind? Every week it gets stronger and stronger and my average going lower and lower.

46 Drunk ******* solo miles at 16.3 average speed. Home made mask made from a hanky and a couple of ponytail elastic bands. Stayed in place really well, I was surprised. Much better than the medical masks.

Slight chance of rain today and yes it did for a little bit. had my jacket in the rear pocket but once I thought I might actually need it, the rain stopped. Only enough to wet the pavement and dirty the bike again.

I guess the virus threat must be over because 90% of the cyclists I saw today were not wearing a mask. I have an 81 year old mother to worry about so I'll keep mine. 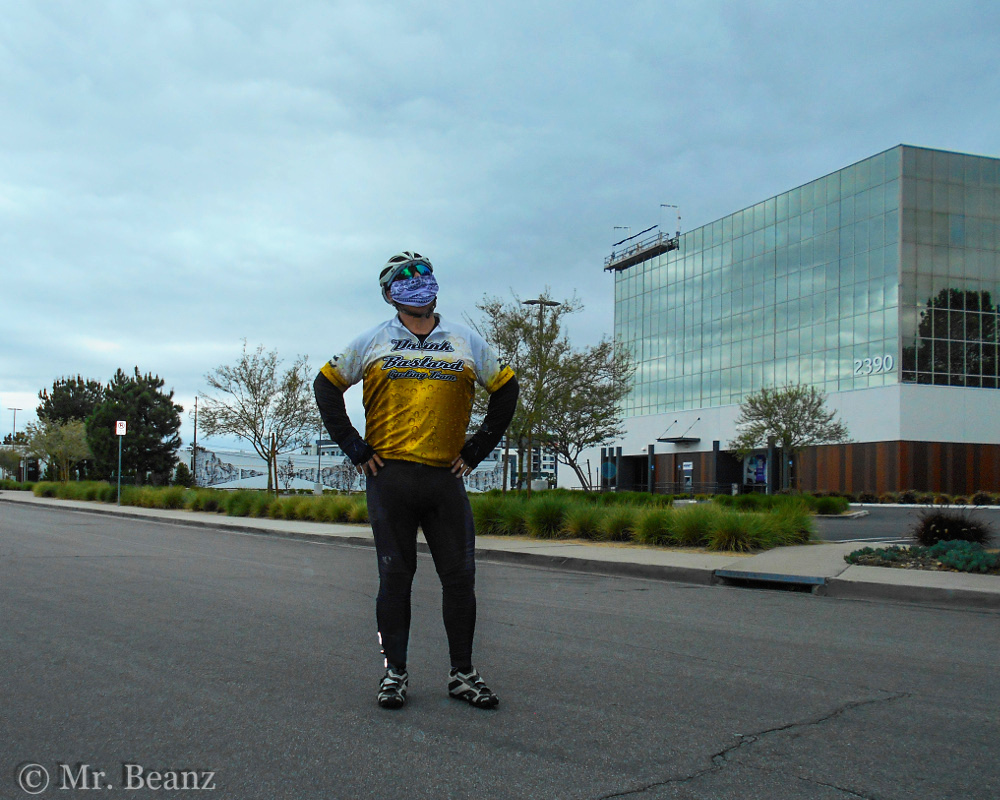 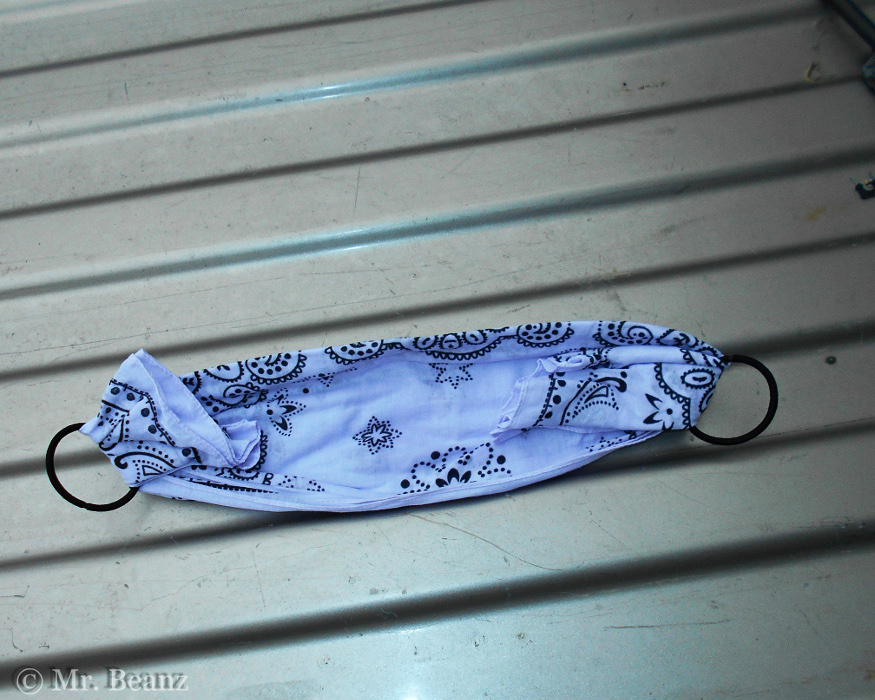 Yes, rode today. Testing a new headset put in my 1997 Cannondale CAD3 Man I love this bike. New headset smooth as butter! I usually just ride to stretch but today, knowing the segments a little better, got 3 PR's at 27 mph for a short bit ha ha!

Then I get home and get an email saying I was dethroned on a strava KOM. I had one? Really, had no idea ha ha!

But anyway, another beautiful late night ride. Finished about 11 pm and I wish I could have just kept riding but had to come home sometime.

I'm such a rebel sometimes. I pulled my mask down. Riding this time is not good idea.

OK then, I won't ride this time, I'll ride next time!

Solo 46 miles today at 16.5 average speed. Wow, felt super hot since we have had a cool spell the last few months it seems. Been 50's, 60's and some 70's but today topped out on my Garmin at 93 degrees. We usually get used to the 100 degree temps but this was somewhat of a surprise to the body ha ha!

But less riders out there so my ride back felt like I was crossing the Sarah ha ha!

Tested the go pro mount, Meh! Cheap plastic vibrates way too much. I ordered a cheap China mount similar to it last night. About half the price too so hopefully it works better seeing it is made of aluminum. My K edge mounts are so much better than the cheap Go Pro stuff. Though this one is good for some trick angles depending on how long you want to ride bowlegged. I'll have to experiment some more but as far as a handlebar mount? Nah, too much vibration.

After the first 20 miles, I could tell the warm weather is here! Cool point of view but riding 20 miles with my legs open more wide than usual was a bummer. Maybe a 3 mile stretch but that's it! I rode about 2 hours earlier than usual since it was supposed to be warm. But even then, less cyclists and the ones that did ride, must have been real early. My way back was like crossing the Sahara alone ha ha! Rode my old baby today, the 1998 Cannondale. Cleaned it up some. Good thing is the tubes are smaller than my Madone so easier to place the mount in various places. Yes, another ride today but this time with Gina. She hasn't had much saddle time lately I think she did pretty well today. Not so hot today but still warm.

26 miles at 15.6 average speed. I was wanting to do an easy ride but what's up with the wind? Been relentless over the last year. What ever happened to the good old days when one could just ride and have a good time. Now, seems every ride is met with a massive headwind. Though we did the short version of our usual ride which is the section heading to the coast, always windy there. So no warm up today, just ride into the wind ha ha!


Getting ready to roll! After ride smile! Not too much suffering in the heat. Went for two rides yesterday. First one was in the morning, while my wife Barbara was sleeping in. It was on my vintage entry level road bike (a late 1970's all steel bike that some wouldn't touch because it's heavy and well, entry level: View: https://youtu.be/cvALfzIV8_w
). The ride was long enough to get lost, estimated 55 to 60 km.
The second ride was with my wife on my touring bike (View: https://youtu.be/ZvCah63l93g
). We rode exactly 38 km when her rear tire went flat. We had a patch kit, but no spare tube. We found out that her tube had a long tear that had been patched previously, with a home made patch (we bought her bike used, a year and a half ago). We tried fixing the damage with two more patches over the old one. It worked for a bit, but the air loss was too quick to ride all the way home. We made it to a local train station (Edmonton LRT) and took the train to get us close to home. I have to replace the tube today, so we can ride together again.
Reactions: tdcadillac
G

No. Not today
Reactions: Mr. Beanz

Awesome, I am now start to do the preparation and hopefully soon I can also update day by day.
Reactions: Mr. Beanz

Mind your own business

Yes, every day except it it's raining. 4.2 miles in the morning, on a fat bike, and 4.2 miles in the evening on a 7 speed beach cruiser. Living in Florida, I don't have to deal with snow or bitter cold.
Reactions: Germanrazor

OldJohn said:
Yes, every day except it it's raining. 4.2 miles in the morning, on a fat bike, and 4.2 miles in the evening on a 7 speed beach cruiser. Living in Florida, I don't have to deal with snow or bitter cold.
Click to expand...

Yup! Still riding! 24 last night across 3 cities. Loving this little XOSS gps unit I got for like $30. Does what I need and the light goes on auto when it gets dark. Works more like a catey computer but works off satellites so I can connect with Strava. Pretty cool deal and has a 25 hour charge life, USB. Happy with the thing. Notice I left my Garmin at home the last few rides. Where Did You Ride Your Road Bike Today?

Where did you ride today?

Open Question- What did you see on your ride today?

Where did you ride your bike today?

R
Did you ride to work in Melb today?

Why Did I Ride So Fast (for me) Today?