Have You Built Your Own Heart Rate Monitor?

Has anyone tried building their own heart rate monitor for use while bicycling? If so, can you share 4 things with me:

1. A circuit diagram
2. Bill of materials
3. Photos of the heart rate monitor mounted on a bike, and in use.
4. Your source code.

Optional: if you made a bunch of printed circuit boards and have some left over, please let me know.

I'll at least breadboard the circuit and play with it and if it is not too expensive, I'll build it out.

Off the shelf HRMs are cheap and function well. It would be very hard to DIY a functional, waterproof and comfortable to wear monitor.

I have tinkered with the ANT+ protocol. Using an ANT+ (garmin) USB stick I was able to read, plot and log heart rate data to a Raspberry Pi single board computer using some Python. I have long since lost the code. The protocol is well documented - you need to sign up at thisisant.com to get access to the device profiles. There are some projects on github that can get you started on reading ANT+ devices.

Another though is that there are many single board computers with analog inputs, you should be able to piece together an instrumentation amplifier using a few op amps and feed that into the board to make a DIY ECG recorder.
B

@maydog, thank you for your suggestions! I see we speak the same language (although I'm not well versed in op amps, but I'll learn.) I'll check into this and follow up when I can. I do have some single board computers here.

As stated they are cheap although it would be an interesting project. The biggest issue I see is duplicating the compact size. Usually homebrew items are larger than manufactured items since most do not the technology to produce micro-devices. I am an Extra Class Radio operator and find most new micro circuits to be impossible to repair for the most part. Maybe it's just my eyesight going.
B

I'm a mere Technician class. I decided on taking the test for that to get entree to the best electronics people on earth -- the radio operators. I haven't bothered to get my General yet, but I did renew my Technician license. KB3JCM. Yes, working surface mount parts can be a bit of a challenge. My hands tremble and my eyes are not that great. I'm hoping that extra pcb's, parts, solder paste and some form of a reflow oven can make up for my deficiencies.

I use a large magnifying glass but in reality most radios are made to be throw away. BTW: You may want to become a member on QRZ.com if you are not already. Some really knowledgeable people there.

I built my first heart rate monitor right after I build an Interocitor.

CAMPYBOB said:
I built my first heart rate monitor right after I build an Interocitor.
Click to expand...

I thought it was after you built your first Gold Plated Campy Record set up and invented the heart?

The only gold-plated Campy group I knew of was owned by the financial advisor/planner that sponsored one of the race teams I was on.

I did have a little help with the Interocitor from a cat named /Exeter.

I can't say that I ever have. I tend to suffer from tachycardia so I probably should use one.Heart rate monitors are available for sale and are cheap. I can't see building one.
B

The product can always be improved. There are a lot of dedicated homebrewers and Makers and unskilled experimenters (of which I'm but one example) in the world.

The only gold-plated Campy group I knew of was owned by the financial advisor/planner that sponsored one of the race teams I was on.

I did have a little help with the Interocitor from a cat named Exeter.

Stuff like this comes up in less time than it takes to...type the word 'time'. Lots of pictures of lots of schematics, bills of materials, instructions, etc.

As a Dynaco and Heathkit kid of the '70's I understand your interest. Good luck.
B

Thanks, CampyBob! I'll look into it.

CAMPYBOB said:
The only gold-plated Campy group I knew of was owned by the financial advisor/planner that sponsored one of the race teams I was on.

I did have a little help with the Interocitor from a cat named Exeter.

One of my Swiss friends has one of those limited editions gold sets but h e has a lot of bikes and components. I always wanted a Pantera, they sold for $10,000.00 new when they first made the scene but that was far out of my range at the time. I would but 2 of them for that now. I actually know what in interocitor is.
Click to expand...

Well, to be fair...other than the device shooting out Death Rays from the screen (soon to be a feature available from Amazon) we are all walking around with an Interocitor in our pockets.

Hmmmm? I wonder if the new I-Interocitor 6 is available from Apple yet?

A local kid had a daddy that made a lot of moolah. The kid went through a series of pricey cars, starting with the first Trans-Am I ever saw (1968? 1969?) that he acquired before they were in showrooms...a semi-race prepped E-type Jag...and a wonderful sounding Pantera.

I was in his Jag with the doors absolutely fluttering at somewhere around 130-140 MPH and that car really didn't handle or brake all that well for the speed it could generate. The Trans-Am was unrefined and scary fast. The Pantera was impressive in just about every category. I'm with you. I would own and/or restore a Pantera in a heartbeat, pouring every penny of disposable income into phone calls to Italy in search of pieces parts. At least the FERD parts are still easily acquired locally. Summit Racing and a VISA card left in a smoldering pile of melted plastic...

When I was young I had to make do with craptastic Eurofag cars like MG's and Triumphs and Healeys and Sunbeams. And although I won't admit to it, I once owned a Simca 1204 GT. God forgive me.

Yes, a Frog-built POS similar to this one: 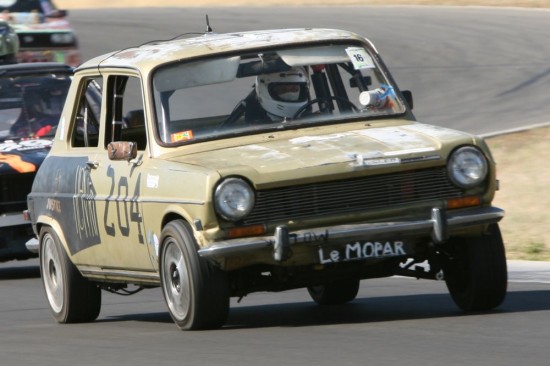 The Simca would absolutely flog itself over our worst roads and rode as stabile as a Rolls-Royce thanks to a suspension system with miles of travel and plush spring rates that soaked up everything, including road feel and feedback. When pressed even the least bit to actually turn, body roll was on the order of 45 degrees and the expected drifts and slides were fun. I'm pretty sure Simca invented the front wheel drive term, "Torque Steer". Hitting the gas and unleashing all 14 horsepower on a snow covered road meant one thing...a hard right turn without turning the steering wheel. Hitting the gas while actually in a turn meant doom, dents and possibly a law suit from the pedestrian on the sidewalk you just ran over.

A Pantera existed only in my dream bank account as a youth and sadly why I was forced to trade my heart to The Devil for one.

We won't talk about the Fiat 124 station wagon that passed through the males of my family...oh, the humiliation...

Somehow, after all these years and years gone by, it is fitting that Schysler and FIAT are in bed together. Who knows? Maybe their progeny will be another POS like the 1204 was.

I had two Fiats a Spider and an X19, they were both great Sunday cars. Drive em on Sunday and back in the shop on Monday. I traded the X19 for a Trans Am and it was a very fast and dependable car but looking back a bit redneck.

Redneck and Tenn. go together like a FIAT and Fix It Again Tony.

So...was your mullet permed or did you go the hair spray bouffant route...with the proper engineering permits, of course? And T-tops...they were required for the bouffant to fit.

I bought a black '77 TiredBird, brand new, for wife unit number 1. Not a TransAm, but it would **** & git. And she looked hot in it. It was a typical GM F-body POS. The smogged up Rochester carb actually came within one nut of falling off the intake manifold. More rattles and shakes than a carnival ride assemble by drunk carnies.

No mullet but T-Tops that leaked like a screen door on a submarine. The car would run 147 MPH all day long. The later Knight Rider versions just didn't run the same but the T-Tops worked better.
You must log in or register to reply here.

Cycling-Vinokourov built his own early success (Reuters via Yahoo!7 Sports)

Have you built your own bike from a bare frame? I need advice.

R
Anyone here built their own wheels?

Anyone here built their own wheels?

I built a new gopro accessory for hands-free pov shooting, thought y’all might dig it

G
Would A Commute Bag With Built-in Lights Make Sense?