Is it true Lance Armstrong was cheating?

"House of Cards" could be an accurate description of Livestrong.

It is in danger from collapsing from outside pressure or from within.

Outside pressure could come from the IRS who regulates and investigates US charities with tax exemption status and can withdraw a foundation's tax exempt status (donors would not be able to claim a tax deduction on their contributions) if non compliance is found. The IRS will act on any complaint drawn to their attention and it is understood that Livestrong is currently being investigated.

These are the known issues without accessing Livestrong's non public books and records:


Livestrong would implode from within if Armstrong is convicted. It is a personality cult all built around him.
Click to expand...

Actually, you can be learned a lot from an internet forum. Who knew???

Yeah, what a 'porker' he was back then. Where is 9kg coming off this guy? 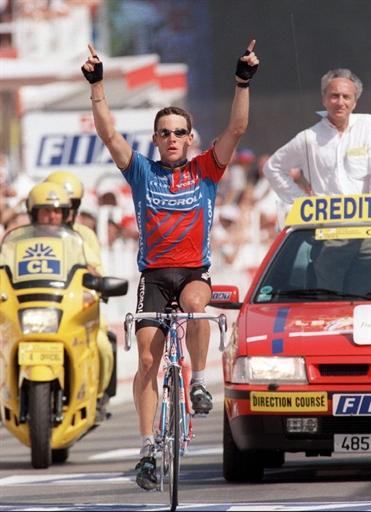 Agree'd, there is no way in hell he lost 9KG's. He was simply one of the new breed of 72KG climbers.

i have been watching the documentary The Lance Chronicles Wrap-Up Show (1 to 10) in youtube, by the end of the episodes Brunyeel and Armstrong let the cameras inside of the hotel room making jokes about the secrecy and the supposed hidden drugs, this was 2004 so the guys were not only getting away with it but also having a kick about the fact that they have cheated so badly, it is also very sad to see Landis and Armstrong being best friends at the time,

/img/vbsmilies/smilies/confused.gif I heard a rumer of it. I hope he wasn't,
Click to expand...

Flyer's.Finale! said:
Armstrong doped both BEFORE and AFTER his testicular Cancer. He is a typical addict, unable to stop his drug habit, even when it nearly killed him.

In addition to Armstrong being a drug cheat---so were his many teammates:

Live Wrong! That's the Nike motto too!
Click to expand...

Doping has been going on in cycling almost from the start. Armstrong might be the poster child for cheating in cycling, but he's FAR from the only name rider who did. Eddie Mercxx was caught using banned substances on a number of occasions. Riders have been caught cheating right up to this year, and I would guess it is more prevalent than people think.

If he was cheating and doping before this testicular cancer, did the drugs contribute or cause the cancer? Did he continually use prohibited substances while undergoing chemotherapy? I was a fan of his, I suppose I still am, and I didn't want to believe he had been cheating and using prohibited substances for a very long time. I'm glad he was eventually honest about it.

According to the rules, yes. However, if a majority of people were also doping, I would not consider him a cheat. If you ask me, Greg LeMond is the true beast, he was first in the Tour De' France General Classification 3 times without doping.

MorganaPendragon said:
According to the rules, yes. However, if a majority of people were also doping, I would not consider him a cheat. If you ask me, Greg LeMond is the true beast, he was first in the Tour De' France General Classification 3 times without doping.
Click to expand...


Microsoft has extended its "AirSim" artificial intelligence (AI) research project to include car simulation which will help advance the research and development of self-driving vehicles.

AirSim provides realistic environments, vehicle dynamics and sensing for research into how autonomous vehicles that use AI that can operate safely in the open world.

"The updated version of AirSim also includes additional tools for testing airborne vehicles. We have made it easier for people to simulate flying drones by adding a built-in flight controller, called simple_flight, that simplifies the setup process," Shital Shah, Principal Research Software Engineer at Microsoft, posted.

"This allows rapid experimentation with control and state estimation algorithms without requiring expensive debugging and development in the embedded world," she added.

According to Ashish Kapoor, Principal Researcher at Microsoft, the latest AirSim version is available now on GitHub as an open-source, cross-platform offering.

AirSim comes with a detailed 3D urban environment that includes a variety of diverse conditions, including traffic lights, parks, lakes and construction sites.

Users can test their systems in several types of neighbourhoods, including downtown, semi-urban, vegetation and industrial environments.

AirSim has been developed as a plugin for "Unreal Engine", a popular tool for game development.

It means that the car simulation is decoupled from the environment it runs in.

"You can create an environment for your specific needs, such as a city or rural road, or choose from a variety of environments available online, and then simply drop in the AirSim plugin to test your self-driving algorithms in that environment," Shah informed.

I wasn't sticking up for Armstrong. In fact, I tried to give props to Greg LeMond.

Cycler6n said:
I heard a rumer of it. I hope he wasn't,
Click to expand...

Until something like 1989 it wasn't even illegal to dope. When they passed the rules against doping Jacques Anquetil quit saying that you could not expect a man to go through that sort of torture without help of some sort.

Did Armstrong dope? Certainly. And so did most of the rest of the team leaders with a wink and a nod.

Contrary to the idiots here that think that EPO or blood infusions are additive or could cause Lance's cancer - get real.

Lance also used Testosterone shots. But not only does this not cause cancer it is believed to prevent it.

Personally I am against performance enhancing drug use. The entire idea of any sort of athletic activity is to push the limits of human performance. If you use drugs you simply aren't doing that.

With the "passport" they now use it is unlikely that drug users will not get caught. I am told that almost the entire Columbian contingent at the race in Columbia were disqualified and given 2 year suspensions.
You must log in or register to reply here.

True or False...Lance Armstrong would

M
Lance Armstrong for Governor of Texas in 2006 -WOW- true or false?

Road Cycling Jul 16, 2003
Fauxprez
F
P
What will the Lance-haters want to happen if it's true?