Jcycle said:
Using a road at all be it on a bicycle or in a car is dangerous.
Click to expand...

I've up-armored my vehicle choices. I am well protected when surrounded by 3+ tons of steel, a phalanx of airbags (no Takata killer airbags here!) and a restraint system Ralph Nader would drool over. The motorcycles and bicycles...not so much. So road dangers can be mitigated to a large extent. Don't ride a bike, a motorcycle or drive a crappy little Fiat 500 and your odds of getting deaded are much improved.


Jcycle said:
This topic is pointless.
Click to expand...

It serves as quite the educational tool to those willing to learn.

No one has ever been hurt while sitting on the couch. And yes, the leading cause of death is life. That said, I would much rather expire from exertion on top of a blonde ***** with big tits at the age of 99 than have a GM pickup truck rammed up my ass at 60 MPH by some drunk/stoned/texting white trash moron while happily enjoying my afternoon bicycle ride with friends.

And I will do everything in my power, from both an educational and legislative standpoint, to make sure I live long enough to bang that hooker on my 99th birthday.

Acheno84 said:
Had the owners not been out there, I would have been attacked for sure.
Click to expand...

This is what pistols and CCW permits are for. Shoot the damned mutt.

Driver is facing charges...just 'what' charges have not been disclosed or at least nothing I can find information on.

Wow...even Lance Armstrong has expressed sorrow for the death of the five cyclists near Kalamazoo, Michigan:
http://www.mlive.com/news/kalamazoo...rmstrong_has_incredible.html#incart_big-photo

The fuckhead's named is Charles E. Pickett of Battle Creek.

Driver charged with 5 counts of 2nd degree murder...still a lot of missing information.

The charges appear at the bottom of the web page at the link.

It is sounding like the D.A. has information that the crash was either deliberate or the driver was on drugs or booze.

Clipped a tree, drove over a rock garden and nearly hit a house minutes before mowing down 9 riders.

His family chased reporters off their property with a front end loaded. Sounds like pure white trash to me.

I don't blame the driver's family for threatening the news morons with a FEL. I would use a killdozer to keep those libtard idiots away from my kin.

The libtard MSN is reporting the driver was "full of rage" because of a couple of Facebook meme posts. Really? OMG...that's some reaching.

I'll let the world in on a secret: EVERYONE on the internet is full of rage. Everyone. Facebook? More so. Well, those cat posts do make me laugh... 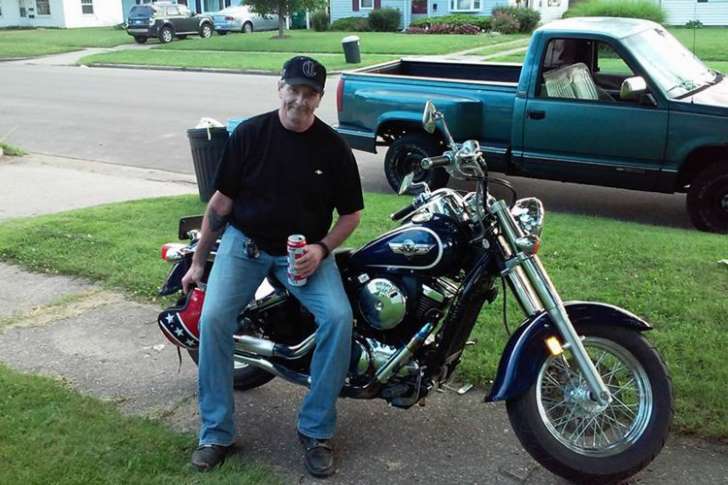 He looks like an ordinary citizen in the picture...obviously, the driver of the pickup truck has some big problems.

Here's your typical MSN quote: "and the blue Chevrolet that turned into a mass murder machine in the background."

The libtard MSN posted a picture of the driver sitting on his non-Harley cruiser motorcycle while holding a beer and a Rebel Flag paint scheme helmet. Hell, that picture could be ME! It means...not much. His actions behind the steering wheel mean everything.

The driver of the pickup truck did not give the bicyclists the respect on the road he demanded when he was riding his motorcycle. That's for sure. Both bicycles and motorcycles are vulnerable in the land of the 3-ton+ brodozer. Something snapped in his excuse for a brain...he was impaired...or maybe both. The end result is five good people are now gone and four more are going to carry the physical and mental scars from this day for the rest of their lives. Friends, families and fellow cyclists will also be affected for the rest of their days.

I love cycling but I feel that with more and more cars on our roads every year, cyclists do not seem to realize that the roads are getting more and more dangerous. I sometimes have to literally come to a halt and let an unthinking cyclist have way even though me as the motorist I have the right of way.

I reckon road cycling isn't that dangerous, but this likely depends on a lot of factors such as time of day, safety features installed on the bike and speed...

divinemaredi said:
I reckon road cycling isn't that dangerous, but this likely depends on a lot of factors such as time of day, safety features installed on the bike and speed...
Click to expand...

I think the most important factor among all of them is speed. If your speed is average, you are less prone to accidents. You should speed up your cycle only when the road is cycle and not when the road is busy.

The Kalamazoo driver was charged with 5 counts of second degree murder:
http://www.nydailynews.com/news/cri...ed-counts-2nd-degree-murder-article-1.2667730

Latest info on the driver:
http://heavy.com/news/2016/06/charl...-driver-suspect-name-victims-photos-facebook/

Lance Armstrong and 700 other cyclists finish the 'Chain Gang' ride for them
http://www.cyclingnews.com/news/lance-armstrong-rallies-kalamazoo-cycling-community-after-tragedy/

Does anyone know the guy riding the bike? I want to take out a life insurance policy on him.
Thankfully he' alive, no harm done, and we all get to see a video of exactly how NOT to make a left hand turn.
He titles his video "reckless driver", he should've titled it "biker has a DEATH wish".
The car was obviously going fast, probably 55mph. He should've made that judgement and given the car the right away to pass, because obviously the car would've had to slam on the breaks to stay behind biker. His "turn signal" that he describes in his video is a JOKE!!!! The car driver could've been looking at radio, phone, coffee cup, scenery or thought the biker wave was him stretching.

The proper way to handle this. Hug the white line (pray for the best) and wait for car to pass. Biker mis-judged cars speed. Even if there are no cars coming, give yourself at least 100 yds in center of road before making left turn. Point your turn ONLY when you have established yourself in the center of the roadway, not while you are on the white line. And I give a last glance over my left shoulder just before I make turn to make sure a car is not pulling a stunt like going into empty oncoming lane because he doesn't want to be behind me, that's even if I just pointed my turn.

Cycling is not dangerous if you follow the traffic rules and you carry all the protection equipment with you. You must follow the traffic rules because it's the most important thing that you can do for your safety. In addition to that, you need to the safety equipment such as helmets, pads, etc. You should also care about the speed. You should change your speed according to the condition of the road.

glenncz said:
Does anyone know the guy riding the bike?
Click to expand...

Yes. He probably rides more miles in minus 25 degree weather in a Winter than you ride in a year.

Since registering here in 2005...actually since I first started browsing this website before I registered and a couple other cycling websites...I have never ceased being amazed at the typed responses from supposedly human life forms. I swear, going by subject, syntax and sentence structure that the site is beset by bots...or the cycling world is full of doofuses.

Sadly, I suspect the latter.

After...again...a supposedly' intelligent human lifeform argued OVER AND OVER that a Campy UltraTorque crankset could be ridden with the Hirth Joint separated by an 'air gap' for any length of time without failure, serious injury or death occurring...I lost any and all faith I had in humans, logic, common sense and my responses to these supposed life forms have grown increasingly less tolerant.

Lord, grant me patience...
You must log in or register to reply here.

S
How dangerous is road cycling, for real?

T
What winter road cycling clothes are you wearing on cyclingforums?

Road Cycling Jul 21, 2022
Kaaya Dsouza
K
T
Where to start? for me road cycling is like a giant forest

Bike Cafe May 25, 2018
reighn
R
S
Win a trip on a road cycling adventure of a lifetime!