You are using an out of date browser. It may not display this or other websites correctly.
You should upgrade or use an alternative browser.
S

This should be an easy one. I only have four rides with a power meter and all within 7 days. I loaded them into training peaks to take a look. I've got only 2 of the 4 at or above tempo and the rest and medium effort rides. I'm not worried about what it calculates my fitness at but it has my fatigue through the roof and my form in the basement. I rode 40 medium miles on Saturday, 25 tempo miles on Monday and 30 threshold miles on Tuesday and took yesterday and today off. According to this, on my group ride tomorrow morning I should plan to be dropped before I leave the parking lot.

Is it likely safe to assume that this is because of such a small sample size? This is my standard training week without issue. According to my TSB form number I'm on the ragged edge of illness, overtraining and injury. I don't believe that to be the case. 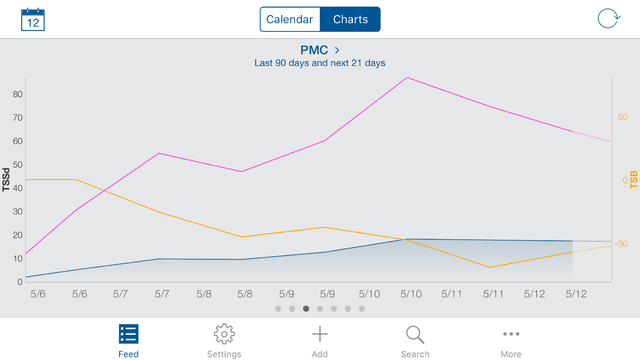 What are your settings in TP?
S

I just uploaded those tonight. The only settings I did was an FTP of 265 and a threshold heart rate of 165. Are those what you are referring to?

Did you seed values in TP for initial settings? ATL/CTL?

If you have an initial CTL of "0", you're gonna dig yourself a deep hole quickly. You can either "seed" values for ATL/CTL to start or just ignore what the TSB is showing for now. As it will take ~ 4-6 weeks for this to all settle out, you might want to put some initial values there just to start.
S

Thank you. Exactly what I was looking for.

I'm using golden cheetah but with a free trial figured I'd take a look at TP. I did not set anything other than FTP or HR so that would make sense If I started at zero. Not even sure what I would set as a seed number, I'll have to look that up on where to start. I like those metrics but they obviously aren't at a place where they can be useable.

SCM said:
Thank you. Exactly what I was looking for.

I'm using golden cheetah but with a free trial figured I'd take a look at TP. I did not set anything other than FTP or HR so that would make sense If I started at zero. Not even sure what I would set as a seed number, I'll have to look that up on where to start. I like those metrics but they obviously aren't at a place where they can be useable.
Click to expand...

How long have you been using GC? You could always seed with those numbers.

There are some guidelines out there (Google?) on how to select seed values for ATL & CTL. For the life of me I can't remember what they are. Maybe just ride another week and select the seed values that yield a TSB value that reflects how you actually feel?
Last edited: May 12, 2016
S

dkrenik said:
How long have you been using GC? You could always seed with those numbers.
Click to expand...

Nothing there usable either unfortunately. Just installed the power meter so that is all the data. Just playing around with different programs to settle in on the most user friendly while reading the power meter training bible.

You can seed your ATL and CTL by guesstimate based on previous mileage in the past 3 months or so. Give me an average week of rides (duration/intensity by feel) and I can do it for you.
S

That's nice of you as I certainly do not know how. My last month looks to average ~120 miles per week at a time of ~5 hours 50 minutes. Zone is typically tempo at zone 3 in power which is typically averaged to near FTP and HR avg is tempo to sub threshold around 10bpm under threshold +-

That's a good starting point for now. Once you've been putting in real data for a few months it won't matter but it's always good to see where you're starting from. Seeding matters more if you've been doing lots of mileage which you haven't been but that's ok.

Out of curiosity what are your current workouts giving you for TSS -- the ones like those tempo rides you described above? And why do you think zone 3/tempo is averages to your FTP, if I read that right? FTP is defined as 1.0 IF, whereas tempo is more like 80-90% of that.

(someone else check my math to make sure I did it right!)
S

Sorry for the late reply.

As for my zone interpretation. Likely misspoke as I'm still digging into the book and learning about interpreting what I'm doing on the roads.
S

Also..your guess was pretty good. Last weeks TSS was 520 and this week is currently 410 with likely one more ride this week, 40 or so miles. Average so far not counting what I will ride this weekend is 465.
You must log in or register to reply here.

M
Why wouldn't you travel more when there are so many benefits of traveling?!

B
What bike lights can make me more visible, not just light the road?