You are using an out of date browser. It may not display this or other websites correctly.
You should upgrade or use an alternative browser.
C

Bought this bike about ten years ago for a few dollars at a garage-sale and mostly just used it in the winter in the basement on a mag-trainer stand. Over this summer though I have been tweaking it for speed. It was a good candidate for this because it has a very light Columbus tube frame and sporty geometry, at least it was sporty in 1985 when it was manufactured, and it is much lighter and sporty than my other two road bikes.

What got me serious was thinking about having a bike with longer cranks to try, since I am a taller than average rider. I had access to a set of 180mm cranks which I used in racing back in the 1990s so I swapped them onto the bike and was amazed when I easily went about one mph faster around a favorite route than I did on my usual road-bike fitted with 170mm cranks. Now I have adjusted the seating position much more to my liking and added a set of Time-brand clipless pedals I have had laying around since the 1990s which I am hoping will unleash even more power and speed.

I don't think there is much more I can do to this bike, but at some point I would like to find bars that are a few inches narrower, and I do have an old Zuess aluminum rear freewheel that feels a pound lighter than the solid-steel Sachs unit on it now which I may try at some point. In the 90s I used to ride and race a Motobecane this size with these cranks and pedals on it and was able to do some time-trials in the 22-23mph range. I know I am slower now, but it will be interesting to see what I can do with a similar setup now. I will try it out on one of the old TT courses later this week and see how fast it will go. 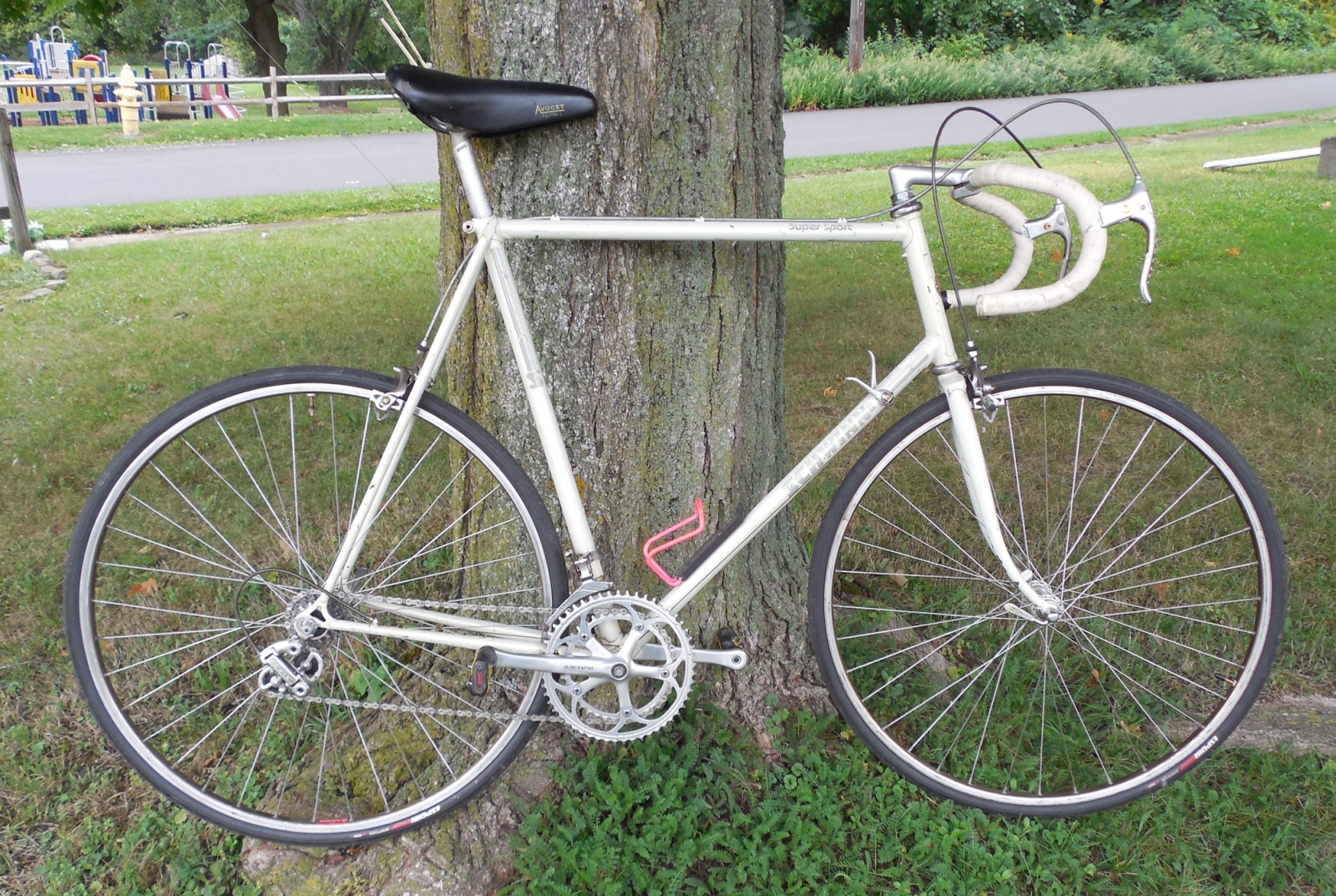 P.S. The rear derailleur is off my old Motobecane too, it is a Shimano "Crane" unit. The Motobecane was destroyed in a bad crash which bent it's fork, frame and front wheel.

My wife has a 1984 Bianchi we bought for 40 bucks back in 1998. Was thrashed but we replaced a few parts, new wheels, shifter brake levers. Polished it up and ran great for several years till she got a full carbon bike in 2006.

She says the steel lugged Bianchi is a better ride..

She also did a 40 mile ride with an 18.1 average speed on it. Really nice bike. Have had shop workers offer to buy it but she's not selling.
Reactions: Fourlegsgood2wheelsbad
C

This Schwinn SuperSport was originally found for $10, but then the new Specialized tires cost at least four times that much. I can not remember what the cranks, pedals and rear derailleur cost back in the 1990s. I had given the cranks to a friend but he was too short to use them, so I traded them the original cranks on the SS to get them back. The rear derailleur and Sachs freewheel were found at a bike shop on Gratiot Sreet in Detroit back then while I was working there for very little as it was considered obsolete. The Time pedals were bought new at a bike shop locally in the later 90s. Whatever I paid for them thirty-some years ago, if the cost were divided into the years and use gotten out of them their cost is very low at this point. My current rule for acquiring cycles and parts is they must be free or had for pocket-change, and I don't see that changing in the future.
You must log in or register to reply here.

Red cross is critically low on blood and plasma

I
Combine high and low intensity in one training session?

Velonews: Bennett Out Of Giro Due To Low Cortisol Levels