Ok, Who Rode In The Snow Today?

Quote by Maydog:
"I was able to get out for a quick 60 yesterday."

23 miles this afternoon. Darkness is upon us too soon! The wind was a stead 16 MPH with gusts to 25...almost like Spring winds! It was 59° today and it's supposed to be near 70° tomorrow. I feel a work-related headache coming on!
Reactions: BobCochran
B

Hey CampyBob, how do you know the wind speed, including gusts? Do you have some sort of device on your bike to help with that, or a weather station at home? The sort that sends data to a weather application you can check on any time? That seems better than a point forecast from the local news channel.

There is wind speed/direction information on about every weather site and there are several wind-specific websites. NOAA also has some decent info.

There's also 'The Signs'. I take it you were never a Boy Scout?

I'm really hoping it snows over here in Blighty again this winter so I can do some snow riding again. It's seriously good fun for me. Unfortunately our weather reports are usually ****.... They report that "this winter will be the worst for decades" and the reality is all we get is a light dusting of the stuff that's gone by the afternoon!

It hasn't yet been snowing where I live but I am eagerly waiting for it to test my new all season bike tires. It surely takes more effort to pedal in snow which makes it even more exciting experience.

I used to do this popular tour ride...read that as: No One Told You But This Is A Race Without Pinning On A Number.

It was almost all pan flat to very gently rolling...80 miles of that. The fit tandem teams just screamed through that stuff. Until the 15-20 miles of steeper rollers and actual climbs were thrown in the mix. The very best of the tandems could boot stomp those 1/2-mile hills and come belting off them with all the mustard they could. After getting my sorry, light single crushed for 3-1/2 hours, trying to hang the vertical miles was damned tough.

I got out for a fast 22 miles of climbing this afternoon. It hit 69°, but the wind was still brutal. Hiding in the hills helped a little and it was a fun workout. You know those days when you're reall on cam and hitting every gear shift timed perfectly to the hills and wind? Yeah...it was one of those rides! Just pounding out a good tempo and staying right up there for heart rate, respiration and cadence. The kind of ride that Colin Magnetti would enjoy training on!
Reactions: BobCochran
B

How disgusting! The website won't allow mt to "Like this" on CampyBob's post just above, because I reached my quota for the day. Only CampyBob would mention a Schwinn of any sort...it richly deserves a "Like This"!

We had a couple days of snow over the weekend, but luckily it mostly passed us by. It was gross while it was coming down, but luckily it didn't stick and it's all gone by now. I'm so glad, there's no way I was ready to face winter this early. I need at least a couple more months before we get iced in!

I still wasn't brave enough to take the bike out though...instead I used the bad weather as an excuse to do some baking and relax on the couch
Reactions: BobCochran

A 1970's Fire Engine Red Schwinn Paramount road racing tandem with what look to be Campagnolo bar end friction shifters like the ones I ordered on my 1974 P-13-9 Paramount single road racer.​

This picture shows the short coupled frame option that was available on singles (both road and track) and tandems by special order.

This bike is built for one thing and one thing only...hauling ass. 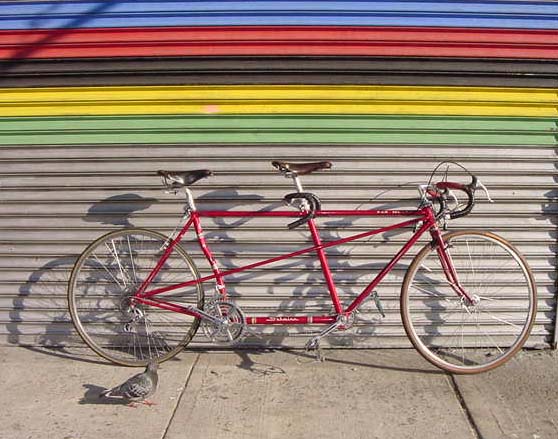 T.A. cranks, Mafac cantilevers, a Phil Wood rear hub, fillet brazed construction with twin laterals, out-of-phase drive line, Campy Superleggera pedals...this machine was SR-71 Blackbird of its day. If you looked over your shoulder and saw this coming you had better step on the gas fast and hope you could grab that wheel and hold it for a few miles.
Reactions: BobCochran

What an awesome restoration.
Reactions: BobCochran

CAMPYBOB said:
Next, a post by Volnix telling us how warm Greece is and that he worked up a good sweat today.
Click to expand...

Actually it rains like a [email protected]@cker at the moment and its gonna be like that for a while...

Now you make me want to see one in motion. I'll have to Google for videos in between chores. And yes, the restoration is both awesome and thought provoking: it makes me realize how heavy that bike must have been compared to the tandems of today. Just look at those handlebars! They must weigh a lot. Not to mention other components.

I'm also awed at your memory CampyBob. You seem able to come up with every precise detail of a bicycle that the rest of the world has (mostly) forgotten. If you ever write a book about bicycles, present and past, I'll do my all to make sure I'm the first or among the first purchaser(s).

That makes me wonder...why was the Blackbird retired, anyhow, if it was so fast? I guess satellites are just faster can can do the same sort of recon work.

Quote by BC:
"Just look at those handlebars! They must weigh a lot. Not to mention other components."

Track bikes, tandems and singles, typically used steel bars and stems and heavy duty aluminum components when those became available. Torque and horsepower handling requirements. The Japan keirin track racing association to this day requires the NJS stamp be cast into only components they approve for track use by professional riders. Failure at speed can mean serious injury or death. A little extra weight on a (mostly_ flat track doesn't mean all that much.


"That makes me wonder...why was the Blackbird retired, anyhow, if it was so fast? I guess satellites are just faster can do the same sort of recon work."

Exactly. Satellites...drones...stealth aircraft...better digital cameras...and the Habu had insane maintenance costs. Still, satellites are largely unsteerable and you have to burn precious fuel to get them over a target when the SR-71 could be there in hours. There was a sled driver on one of the firearm forums I frequent and his stories were very interesting!


"I'm also awed at your memory CampyBob. You seem able to come up with every precise detail of a bicycle that the rest of the world has (mostly) forgotten. If you ever write a book about bicycles, present and past, I'll do my all to make sure I'm the first or among the first purchaser(s)."

Thanks! My memory is still pretty good, but I never considered myself a very good writer and neither did any of my teachers or professors. At best I'm a hack.

However, I could bore you to tears with all the worthless **** I know about racing cars, fast motorcycles and loose women! I won't say that I lived through the Golden Age of American Cycling, but I sure got to see a lot of really good equipment over the years. Unfortunately, while I manage to collect an amount of steel and aluminum that will cause an instant divorce, my meager stash of cycling **** is miniscule compared to some of the hard core collectors out there. Besides, I prefer riding to polishing!

CAMPYBOB said:
1
This bike is built for one thing and one thing only...hauling ass.

Poor stoker, look at those drop bars in the rear. :lol:

Heheh! The stoker's nose was buried in the small of the captain's back. Aerodynamic and short enough it could be hustled around corners in impressive fashion.

Those old steel racing tandems were anything but slow! On the open road a well matched pair could scream across the countryside.

I had a friend that was a USCF moto ref. He would moto-pace road tandems a damned near the speed limit. Back in the day when a 52 x 14 or 13 was top cog, you could see tandems spun out. Guys use to put those huge T.A. chainrings on, mount a Campy GT rear derailleur and go out and play in traffic.

There were a few touring tandems around in the early 1970's, but they were mainly low-end junk...Gitane comes to mind.

There were really only two type of tandems I remember seeing...full bore racing machines with a lot of Campy or mixed French, English and Italian components hung on them or the heavy , one-speed cruiser frames that guys would 'upgrade' into multigear derailleur configuration with a usually weird and bizarre mix of low to mid-line European components and American **** that was bought up cheap and altered to suit. Picture a Schwinn Twinn with some abortion looking drive line and inverted buckhorn handlebars a pair of Brooks saddles and wheels stolen off God knows what single bike.
G

When rode in the snow day we should be more carefully
You must log in or register to reply here.

Ok, Who Rode In The Snow Today?

Finally nice here! I rode on my hybrid last night.

Has anybody on here rode from Galway to Dublin?

DON'T use the services of "Rode" (bike shop in Pt Chevalier)

A
Anyone rode a century back to back days?

E
Buying my first real rode I have lots of questions