Please help! i don't know anything about this issue!


You are using an out of date browser. It may not display this or other websites correctly.
You should upgrade or use an alternative browser.
N

After a couple unsuccessful attempts to Dicks's Sporting Goods, I am reaching out to you professional riders out there to help me out.

I cannot seem to figure out how to fit these bikes into this rack.
I have a regular Honda Accord.

Am I doing something wrong OR should I buy a different rack?

If so, which rack? Please please all comments appreciated.

Thank you very much in advance.

If your rack is like this, you have to find the straighter part of your top tube (bar that goes from seat to handle bars) and place it on with the straps/holders.

So your front wheels will more than likely point downward.

Used to be easy when bikes were straight across top tubes. But now with sloping top tubes on roadbikes and mountain bikes, it's not as easy. 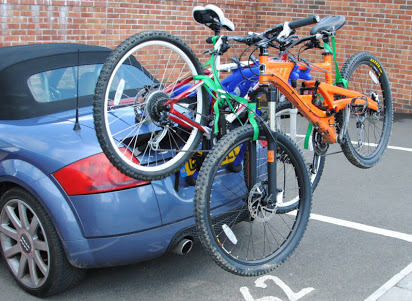 Mr. Beanz said:
If your rack is like this, you have to find the straighter part of your top tube (bar that goes from seat to handle bars) and place it on with the straps/holders.

So your front wheels will more than likely point downward.

Used to be easy when bikes were straight across top tubes. But now with sloping top tubes on roadbikes and mountain bikes, it's not as easy.

Sometimes it helps to remove a front wheel to get more road clearance. Or, on a hardtail, to insert one carrier between seat stays and seat tube. And/or to rest the other carrier against the down tube instead.

I used to carry a tandem on a rack similar to that by taking off both wheels using a rear axle core to hang the chain. Then strap the front fork secure with a bungee chord. Pretty stable but I know most people hate to remove wheels.

You have to be careful with rear racks like the one you bought and the one in the picture. As the car goes down the road your car bounces up and down from bumps in the road, well the rack, being in the rear and having a load of bikes on it is moving up and down a great deal more than the car is, and you would be surprised how some of those bikes are built low because of the car, and a bike bounces a bit too much and the wheel makes contact with the highway bending the wheel which you won't find out about it till you get your bike off the rack and wonder what happened. And a lot of these trunk style hitches have been known to damage the car's paint.

Another bad idea for a bike rack is the kind that mount your bikes on top of the roof of the car, so what happens you forget those bikes are up there and drive under a low overhang like at a fast food place, or those stupid poles hanging horizontally across some parking lots that have a 7 foot clearance, a low tree branch, or a garage, and smash there goes your bikes and you could also damage the roof of your car.

Then there's the trailer hitch type of racks, probably the safest from damage since most people backing up will see their bikes in the rear window and will remember not to back up to far and hit something, but some have and there goes a bike or two. A hitch rack holds the bikes up higher so the wheels won't hit the road but not too high so you can't get underneath low stuff.
You must log in or register to reply here.

I'm soo close to finishing my bike but I still don't have shifters! Please Help!

Please help with a school project on cycle tours!