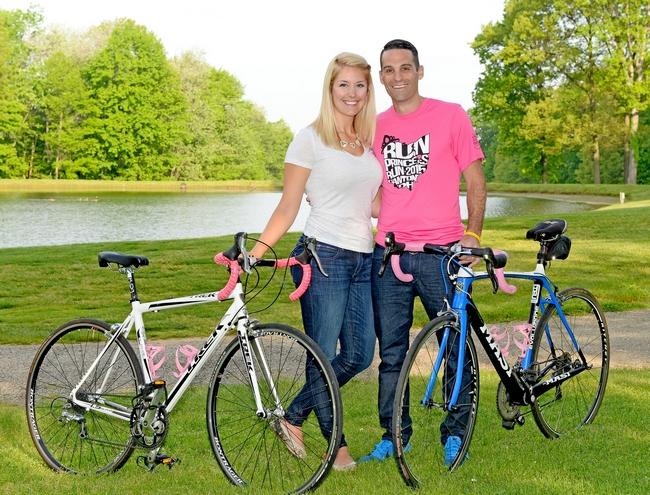 The last time Dr. Nicholas Shundry of Green rode his bike across the country it was to heal. This time, it will be a celebration of life.

The emergency room physician with Summa Emergency Associates is about to participate in the race of his life — the Race Across America. He'll be raising money for the Princess Foundation, an organization he started in memory of his former fiancee, Eva Marie Gallagher, who died unexpectedly from a torn aorta, the artery that carries blood from the heart, in 2013. He established the Eva Marie Gallagher Memorial Fund through the Stark Community Foundation, later changing the name to the Princess Foundation.

In 2014, he rode from Portland, Ore., to New York City to heal from the emotional sorrow after losing Gallagher, a dental hygienist. He also set up an annual Princess Run, a 5K race/walk as a fundraiser.

This year, he is taking it one step further, riding his bike across America with a friend, Michael Collins. They will be joined by Shundry's now fiancee, Cassie Foster of Alliance, who will serve as crew chief.

"A lot has changed in the last few years," said Shundry. "I was able to accomplish so much on my bike ride in 2014. I used that ride as a way to heal. But in Nov. 22, 2014, at my birthday party, a good friend introduced me to Cassie and we started dating soon after. We just got engaged."She is an emergency room nurse at Summa.

A few years ago when he was riding for Gallagher, he heard about the Race Across America and decided it was something he wanted to do.

"It had always been something in the back of my mind as something I wanted to accomplish," he said. "I decided to actually do the race about a year ago.

"Shundry and Collins will team up, alternating riding for nine days after taking off June 18. The crew coasts behind the bikers to make sure they are safe and have nourishment during the 3,000-mile race, said Foster.

"The average speed will be 14 miles per hour for the entire race in order to finish in the nine days," said Shundry.

"We will finish June 26 in Annapolis, Md."Foster will be traveling with three others so they can take turns driving, navigating and sleeping. "This is something I want to do for him because he will be riding 180 miles a day. That is a lot. We are talking all types of elevations and weather.

"Shundry and Collins, who now lives in San Diego, have been friends since childhood. They have done two triathlon races (biking, running and swimming) together.

The raceThe Race Across America is about 30 percent longer than the Tour de France. Racers must complete the distance in roughly half the time, with no rest days. The race is open to professional and amateur athletes, but solo racers must qualify.

http://www.cantonrep.com/news/20160607/dr-nicholas-shundry-participating-in-race-across-america
You must log in or register to reply here.