I have a pair of Giro fingerless gloves that work fine in the winter, but Houston summers can be very hot and humid. That makes me sweat like a pig and causes the leather (leatherette?) palms of these gloves to swell up and get squishy. Also, the dye in them seems to be water based, so they end up turning my hands black and leaving a trail of black splatters on the ground.

I've searched the forums for an answer, so I know some will say "don't wear gloves when it's hot", but after scraping up my palms a couple of times in crashes I learned my lesson.

Is there a material out there that's protective but won't turn into a gooey, wobbly mass when I sweat on it? What are you using?

I usually wear the cheap crochet back gloves and rinse them out after every ride. They don't have much in the way of padding and you'd never find them with gel inserts and such. But that's fine with me and you even get small tan dots on the back of your hands - better than the usual biker's hand tan. Don't get me wrong they still get pretty saturated by the end of a long ride - just like the rest of me. The only thing doesn't sweat around me in the summer is the bike. Oh they usually run really small size-wise. I have smallish hands and wear XL.

Get some new gloves. Bontrager, Trek, Giro should have something better. Mesh back for cooling effect.

Aerotech Designs has two types of fingerless gloves with crocheted backs, one with gel, and one without.

I sweat a lot, and mine (non-gel) have lasted 2 years, and are about due for replacement.

Which Giro gloves are you using? I have the Giro LTZ fingerless gloves and do not have that problem. I do have black for winter and white for summer though...oh, and I am in Houston too.

Giro gloves typically have a tag inside the glove on the outside seam.
The LTZ glove has no padding and the palm is made of 70% polyester and 30% polyurethan...
I do not like padding either, too much padding can make my hands go numb... but I do like a bit of protection if I have a minor off. ( do something stupid like have a brain fart and forget to unclip when stopped, or unclip the right leg on a left hand camber)

Nashbar leather palm, cotton string-back crocheted gloves touring type in 'Natural' color. IMO the are the coolest for hot, humid weather. Like all materials (other than perhaps Neoprene) they will absorb sweat and get a little soggy. Like all materials, the sweat will kill them in the span of a couple months of daily summer riding. The wet/dry cycles will crack the leather as your sweat leaches the natural oils out of it. You can, if you want to go through the effort, re-apply leather preservatives, but it's just easy to toss the old pair and grab a new pair out of stock.

Unlike some gloves that sell for $205-$35/pair, theses are cheap and tossed in the trash without much remorse. Comfort/padding is light to medium when new. If you need a heavily padded glove these are not for you. $9 regular price and around $7 when on sale. 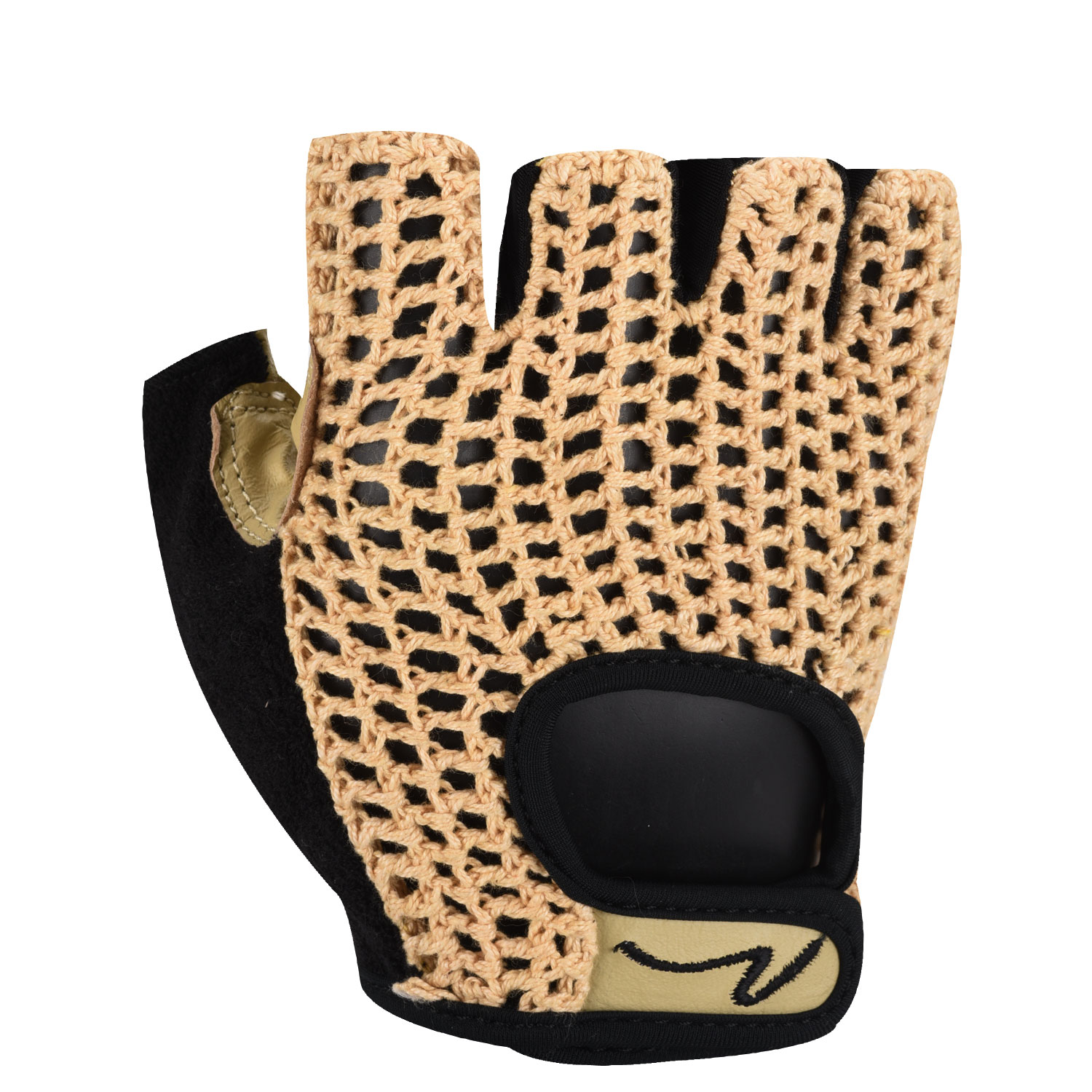 I didn't read thepieeatingjay's post. I echo his experience 100%.

blastguardgear said:
Aerotech Designs has two types of fingerless gloves with crocheted backs, one with gel, and one without.

I sweat a lot, and mine (non-gel) have lasted 2 years, and are about due for replacement.

Thanks for the tip, blastguard. I'll have to order a pair.

I hate padding and I hate terry "snot-patches" on the thumb.

"I hate terry "snot-patches" on the thumb."

That's what jersey sleeves are for.

CAMPYBOB said:
That's what jersey sleeves are for.
Click to expand...

They remind me of the gloves my father wore in the 70's and early 80's. Don't you need gel palms? LOL

Keep them simple or go gloveless.

You could just use a cushier bar tape... As for crash scrapes, ehmmm, magnets?

FWIW. I think cycling gloves may be a personal choice, but I recommend gloves with traditional crocheted backs, too ...

Waybackwhen I tried a pair of the type with the non-crocheted back which almost everyone else seems to prefer, and they just were not as comfortable to me.

The ones I wore when dinosaurs ruled the peloton were imported from France and Italy. One brand had the gay pride world champion's rainbow colors knit in a zig-zag pattern in the string back. And I think I saw clones of those on Alibaba or some Chinese website.

I've had gel padding and as long as it isn't over done they are OK. The Spenco stuff that came out in the eighties was way to thickly padded for my grip.

I'm currently using a 2 MM Fizik Microtex over another 2 MM layer of Fizik Microtex. It's still pretty solid thanks to tight wraps and it stays put. Any light racing glove feels good on it.


You know...a friend is a 'sweater'. Sweats buckets. A couple years ago we went out on a 100° day and he shows up wearing those $.99 brown cotton work gloves...full fingers. I asked him what the deal was with the funky gloves. He explained that among all his high tech cycling gloves that when the sweat was running in rivers down his arms the only thing the gave him a decent grip on the bars was the cotton ones. They absorbed the sweat and he pulled another pair out of his jersey every time a pair was soaked.

I have some Hincapie gloves that are pretty minimal and have lasted a long time. Wear them 8 months out of the year.
You must log in or register to reply here.

Hybrid Performance vs. Trek vs. ??? - 45yo buying his first bike in 25 years and seeking advice

Hybrid Performance vs. Trek vs. ??? - 45yo buying his first bike in 25 years and seeking advice