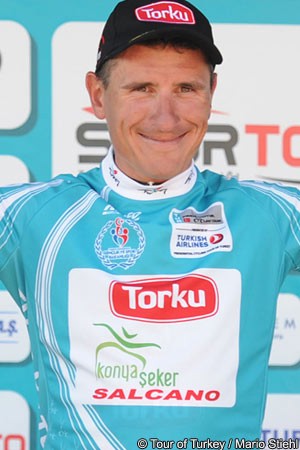 Bulgarian rider Ivailo Gabrovski is facing a possible lengthy ban plus the loss of his Tour of Turkey title after a urine sample given during the race has shown traces of EPO.

The 34 year old was riding the race with the small Konya Torku Seker Spor and dominated it, beating several WorldTour teams and riders in doing so. He finished well over a minute clear of the next rider on the raceâ€™s sole summit finish of Elmali, then successfully fended off all attacks over the five remaining days.

At the time, there was a general scepticism amongst some teams at the race. One team manager told VeloNation that he couldnâ€™t accept the result, referring to both Gabrovskiâ€™s strength and also the fact that he was temporarily blocked from racing in 2003 and 2005 as a result of a too-high hematocrit.

Gabrovski denied all such suggestions, though, insisting that he was racing clean in a press conference after the race.

â€œThis is not a surprise. This is a lot of workâ€¦not only this year or last year. Iâ€™ve been for more than 15 years a professional rider,â€ the 34 year old insisted in a video interview, which can be seen here.

â€œI started with the road bicycle at eight years of age and all my life, I do the same thing. I ride my bike. I have no life like other guys and girls, I only have the bike. This is all I have.

â€œSo cycling is my life. What happens here now is a lot of work and a lot of mind that I put in this race. Also, lots of wish, lots of courage to win the race. Luck too. You always need luck.â€

It appears his luck has run out, though, with the UCI issuing a press release today laying out the situation he now finds himself in. â€œThe UCI advised Bulgarian rider Ivailo Gabrovski that he is provisionally suspended. The decision to provisionally suspend this rider was made in response to a report from the WADA accredited laboratory in Athens indicating an Adverse Analytical Finding of EPO in a urine sample collected from him in a test during the Tour of Turkey on 24th April 2012,â€ it stated.

The governing body added that he would remain suspended until the Bulgarian Cycling Federation determined if he had committed an anti-doping rule violation under Article 21 of the UCI Anti-Doping Rules. He can request and attend the analysis of his B sample.

Both will advance a place if he is ultimately proven guilty of EPO use.

Meanwhile Lituanian rider Rasa Leleivyte also found herself in the same position after a positive A sample for EPO taken in an out-of-competition control on 12 June 2012. She took must decide if she will accept the result or opt for a B sample analysis. Like Gabrovski, she is provisionally suspended.


Read more: http://www.velonation.com/News/ID/12433/Tour-of-Turkey-winner-Gabrovski-suspended-for-A-sample-EPO-positive-doping-test.aspx#ixzz21462hcaH
You must log in or register to reply here.

Velonews: Meier Relishes Chance To Ride For Gc At Tour Of Turkey

Velonews: Greipel Struggles To Crack Podium In Tour Of Turkey