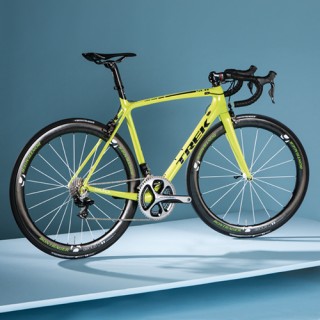 Photo: Brad Kaminski | VeloNews.com
$12,320, TrekBikes.com
Bike design today seeks to separate a rider from the road. Dampers, pivots, slack geometry, and ultra-stable handling all conspire to eliminate surprise and improve predictability. And that’s wonderful — sometimes.
The Trek Emonda looks in the opposite direction, and that’s why we love it. It’s stiff — incredibly stiff — a near perfect translator of action into reaction. A flick of the wrists sends it into flawless, arcing turns; a kick of the heels into immediate forward motion. It’s not comfortable, nor is it aerodynamic.  It is light, and it is rigid. It takes everything you can give it and asks for more, and doesn’t inhibit its rider from feeling an intimate familiarity with the surface below.
But a one-trick-pony the Emonda is not. Smart design and its component spec allow it to extend its reach far beyond the racing scene.
The Emonda’s direct-mount brakes  are a highlight. Both the Shimano and Bontrager versions offer excellent power and modulation, even better than the best single- bolt calipers; but more important is the dramatic increase in tire clearance the new brake design allows. We’ve fit up to a 31mm tire in the Emonda.
A 31mm tire in a race bike? Absolutely.
That makes the Emonda versatile. Add a pair of burly tires and it’s as if you’ve hit an adventure switch; the Emonda is instantly transformed from a rigid racer to a proficient explorer. The comfort gained from a set of big tires run at lower pressure is far greater than anything that can be designed into the frame itself. In short, the Emonda with 30mm tires is far more comfortable than something such as Trek’s own Domane with 25mm tires.
The Emonda is a racer; of that there is no doubt. But unlike most of its ilk, it is still capable of taking a step back, dipping its toes into a wider, rougher world. For that, it’s our 2015 Bike of the Year.
The post 2015 Buyer’s Guide: Bikes of the year appeared first on VeloNews.com.