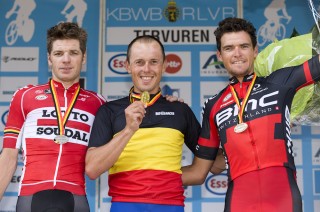 Van Hecke scores 1st Belgian tricolor
Preben Van Hecke (Topsport Vlaanderen-Baloise) won the Belgian road race championship on Sunday.
The 252km race was run on an 18km circuit in Tervuren.
Lotto Soudal had six riders in the 25-man break of the day. But in the end, the race boiled down to just two men, and it was Van Hecke who proved strongest in a two-up sprint against Jürgen Roelandts (Lotto) with Greg Van Avermaet (BMC Racing Team) rounding out the podium in third.
It was the first tricolor jersey of the 32-year-old’s career.
“Jürgen and I both have done our job,” Van Hecke said. “I had at the end that little extra strength.”
“This is a huge disappointment, the biggest one of my career,” said Roelandts. “I felt I was the fastest, although I knew Preben isn’t slow. He made a strong impression today.
“I really wanted to win the title. Until the last 200 meters it was looking good. In the sprint it went wrong.”
1st-year pro Buchmann wins German championship
Emanuel Buchmann (Bora-Argon 18) took the victory in his first shot at the German road national championships on Sunday.
Buchmann, 22, won the 204.8km race in Bensheim ahead of Nikias Arndt (Giant-Alpecin) and Marcus Burghardt (BMC Racing Team). His team had five riders in the final selection, and when he made his move it proved to be the decisive one.
The 22-year-old Buchmann, who will make his Tour de France debut July 4 in Utrecht, took the prize ahead of a number of favorites, among them defending champion André Greipel (Lotto Soudal) and John Degenkolb (Giant-Alpecin), who finished 18th and 16th, respectively.
“My Tour nomination was the icing on the cake, but now going there even in the champion jersey, that’s simply incredible,” said Buchmann. “I was also really strong today, so that’s not an undeserved victory. I knew that it would have been difficult in a sprint and therefore Björn Thurau and I alternately attacked. I was lucky that they let me go.”
Terpstra claims 3rd Dutch title
Niki Terpstra out-kicked Ramon Sinkeldam (Giant-Alpecin) and Danny van Poppel (Trek Factory Racing) to win his third Dutch road championship on Sunday.
Victory in the 253km race around Emmen seemed to come as something of a surprise to Terpstra, who also won the Dutch title in 2010 and 2012.
“This title is the most surprising of the three,” he said on Dutch TV. “I’m not really a sprinter. I really thought that Sinkeldam would be faster than me.”
Jungels does the double in Luxembourg
Bob Jungels (Trek Factory Racing) followed Thursday’s time-trial victory with road gold on Sunday at the Luxembourg national championships.
When Ben Gastauer (Ag2R La Mondiale) attacked from the start line, Jungels said the pursuit went “full gas” up a small climb.
“At the top we were only four guys left and we did the whole race with the four of us,” he said. “After that it was an elimination race, which suited me. We lost one guy with 60kms to go, and then another we could see was struggling on the climbs each lap, and so in the end it came down to Gaustauer and me.”
Jungels eventually shed Gastauer to solo to victory by almost a minute. Gastauer held on for second with Pit Schlechter (Leopard Development) third.
Wyss brings BMC a 2nd title at Swiss nats
Danilo Wyss brought BMC Racing Team its second national title on Sunday, winning the Swiss road race in Steinmaur.
Wyss took the victory in the 192km championship ahead of IAM Cycling teammates Sebastien Reichenbach and Mathias Frank.
“I tried to attack Michael Albasini (Orica-GreenEdge) with two kilometers to go because I knew he was really fast and really good on this type of finish,” Wyss said.
“It was a tricky finish because the last kilometer was a bit downhill and then there were two 90-degree turns. I knew I had to take one of the last turns in the front. I took all the risks and sprinted before the turn. Albasini did the same and we entered too fast and he crashed.”
On Wednesday, Wyss’s teammate Silvan Diller won the Swiss national time trial title. In Sunday’s road race, Diller just missed the podium, crossing fourth at 19 seconds.
Other championships
South Africa: Jacques Janse van Rensburg (MTN-Qhubeka)
Australia: Heinrich Haussler (IAM Cycling)
Austria: Marco Haller (Katusha)
Canada: Guillaume Boivin (Optum-Kelly Benefit Strategies)
Denmark: Chris Anker Sörensen (Tinkoff-Saxo)
Eritrea: Natnael Berhane (MTN-Qhubeka)
Estonia: Gert Joeäär (Cofidis)
Ethiopia: Tsgabu Grmay (Lampre-Merida)
Latvia: Aleksejs Saramotins (IAM Cycling)
Norway: Edvald Boasson Hagen (MTN-Qhubeka)
Poland: Tomasz Marczynski (Torku)
Portugal: Rui Costa (Lampre-Merida)
Czech Republic: Petr Vakoc (Etixx-Quick-Step)
Russia: Yury Trofimov (Katusha)
Slovakia: Peter Sagan (Tinkoff-Saxo)
The post 2015 European road championships: Fresh faces in Belgian, German jerseys appeared first on VeloNews.com.