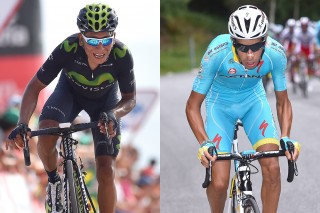 Who proved to be the best climber of 2015? We couldn't decide, so it's up to you, our readers, to vote and help us pick a winner. Photo: Tim De Waele | TDWsport.com (File).
Our indecisive VeloNews editors couldn’t agree on who was the best climber of 2015. Help us pick a winner.
Nairo Quintana
Let’s play fantasy cycling for a moment. You need a climber, one who combines rock-solid consistency with flashes of anti-gravitational brilliance — a rider who will always be in the mix and is guaranteed to take a couple wins, too, even at the biggest race in the world against the best competition, all in peak form. You need the best climber in the world. Based on 2015 results, you need all 5-feet-7-inches and 130 pounds of Nairo Quintana.
Remove the crosswinds from stage 2, and Quintana won this year’s Tour de France. He took more time on the upper switchbacks of La Toussuire and Alpe d’Huez than Chris Froome took from him on stage 10 to La Pierre-Saint-Martin.
He may have lost to Aru at the Vuelta, but he was sick, and Aru came in fresh after having skipped the Tour de France. Put the two head-to-head on equal terms, and Quintana is the clear victor.
Fabio Aru
Grand tours are a climber’s playground, and in 2015, Fabio Aru was the neighborhood bully. He won two major mountain stages at the Giro — on his way to second overall — then went on to take the Vuelta title on the back of his climbing chops. Alberto Contador outclassed Aru early at the Giro, but the Italian closed out the race with ferocity, winning stages 19 and 20, brutal mountain tests where he clawed back five minutes on Contador.
At the Vuelta, Aru dropped race leader Tom Dumoulin on the final day of climbing when he launched an attack on the penultimate category 1 ascent to claim his first grand tour title.
Astana benched Aru this July in favor of defending Tour champ Vincenzo Nibali, so we’ll never know how he would have fared on the climb-heavy parcours. But we’re guessing he would have crushed it. When the pressure was on in 2015, Aru was the greatest climber of them all.

The post 2015 Velo Awards: Climber(s) of the year appeared first on VeloNews.com.