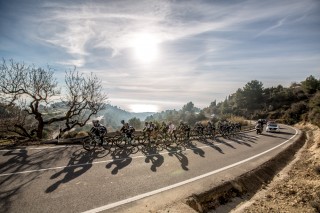 The area around Calpe, Spain will reportedly host a time trial during the Vuelta a Espana next summer. Photo: BrakeThrough Media | VeloNews.com
The route of next year’s Vuelta a Espana will be officially unveiled in January, yet more details are being revealed about where the Spanish grand tour will trace.
Officials along Spain’s Mediterranean coast confirmed there will be what’s described as a “decisive” time trial near the beach resort of Calpe. The official distance and route will be finalized in the coming weeks, but it’s expected to push inland into some moderate climbs before ending along the windy coast into Calpe.
What’s confirmed is that the 2016 Vuelta will start August 20 in northwest Spain in Ourense in the Galicia region, which has bet in a big way the past few seasons on the Spanish grand tour. The hilly coastal region was the host of the 2013 start and the conclusion of 2014.
It’s also been confirmed the race will return to the Ézaro hilltop finale, with ramps as steep as 29 percent, won by Joaquim Rodríguez in 2012.
The 2016 route looks likely to include four stages in Galicia before sweeping east along the north coast. Spanish newspapers reported that the La Camperona summit, featured at the end of a stage won by Ryder Hesjedal in 2014, will appear in the first week.
The race will then likely loop through the Pyrénées, with local officials hinting stages in the mountains of Navarra, before pushing south toward the time trial in Alicante. It’s likely the race will dip into Andalucía before ending in Madrid on September 11.
So far, a few top riders have committed to the Vuelta, but the race typically ends up on the racing program on many more, depending on how things shake out in the Tour de France.
Nairo Quintana has already confirmed he will race the Vuelta, while others, such as Rodríguez and Alberto Contador, remain uncommitted on the Vuelta. With the Rio de Janeiro Olympics happening next summer, many of the elite pros — such as Chris Froome — are putting the Tour de France and the Olympics at the center of their racing calendar.
Click here to see the route of the 2016 Giro d’Italia and here to see the 2016 Tour de France.
The post 2016 Vuelta to include ‘decisive’ time trial near Calpe appeared first on VeloNews.com.