Velonews: Anti-doping Is Coming To Masters And Amateur Racing 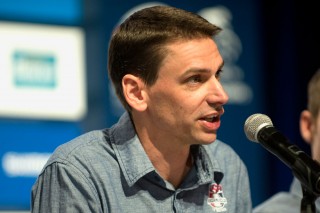 USA Cycling CEO Derek Bouchard-Hall says he has received consistent feedback from members indicating that doping is a problem in the amateur and masters ranks. Photo: Casey B. Gibson | www.cbgphoto.com (File).
The odds of getting grabbed by an anti-doping chaperone after an amateur race in the U.S. have always been close to zero. Though the U.S. Anti-Doping Agency (USADA) catches a dozen or so amateur cyclists every year, testing at the amateur level is by most accounts woefully inadequate, so infrequent that its usefulness as a deterrent is all but gone.
USA Cycling wants to change that. A proposal released to stakeholders last Friday would add $3 to most amateur licenses in 2016, and up to $50 to pro licenses, to pay for a three-fold increase in testing of the amateur ranks.
“This will absolutely bring testing into masters racing, Cat. 3 races, absolutely. It’ll go across the sport so that amateurs face a credible risk that they may be tested,” said USA Cycling CEO Derek Bouchard-Hall.
USA Cycling will take the surcharge attached to each license and hand it straight to USADA, which performs testing in the United States. USADA will act with autonomy, Bouchard-Hall said, though USA Cycling will provide some guidance.
“All of the money we collect goes straight to USADA, and that gives us a certain number of tests. They then go off and conduct that testing. We can’t tell them which events to go to,” Bouchard-Hall said.
Currently, if a promoter wants to ensure anti-doping testing at an event, that promoter must pay USADA to show up. Few do, given the expense. And so, amateur racing goes largely untested. The goal of the new program is to increase testing without putting the financial burden on race promoters.
The precise number of tests to be carried out in 2016 is yet to be determined, and will depend on the strategy implemented by both USADA and USA Cycling. USADA charges a flat fee to show up to a race and then additional per-test fees. Given a certain level of financing, it can either show up to more races and test a fewer riders at each, or fewer races and test more riders at each. USA Cycling isn’t sure which is more effective — perhaps a combination of the two.
Is amateur doping really a problem? A study cited by Bouchard-Hall suggests it certainly is.
“The conclusion was that the highest incidence of reported doping wasn’t at the elite end, because they are tested a fair amount — there is a credible threat — or at the low end, the beginners, because they’re just getting into the sport,” Bouchard-Hall said. “The highest incidence was in Cat.2, Cat. 3, Cat. 4. They start to get really passionate about the sport and want to do well, but there was zero perceived threat of being tested.”
News of a busted amateur filters out a few times every year. Perhaps you recall the story of David Anthony, written by Matthew Beaudin in 2013. It was a good headline, and a disturbing yarn: “In search of relevance, Cat. 3 doper turns to EPO.” Anthony was busted at the Gran Fondo New York in 2013. He admitted to taking both EPO and HGH, and was put on USADA’s sanctioned list for two years — a list of names you don’t know, popped for substances that you do. There are more than two-dozen amateurs on it today, sanctioned for HGH, EPO, and a whole lot of testosterone.
His story is too rare, and he was only caught because Gran Fondo New York paid for its own testing. The event’s outright winner in 2015 was stripped of his title after failing a test. Most races, however, can’t afford testing. Racers in hotbeds like Southern California point to a wild-west attitude, particularly in the masters ranks. Wealth and competitive personalities combine with infrequent testing, and rules go out the window.
“I solicited feedback from our membership; the number-one complaint was that we had to do something about doping in the amateur ranks,” Bouchard-Hall said. “So our efforts are going to be across the spectrum, the only debate is how far down we go. Cat. 3? Yes. Four? Probably.”
The post Anti-doping is coming to masters and amateur racing appeared first on VeloNews.com.