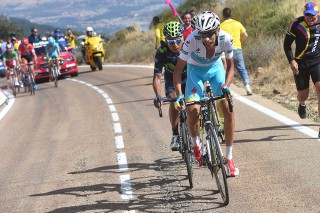 CERCEDILLA, Spain (VN) — Fabio Aru has a way of turning races around. One day after crashing and storming away from the Vuelta a España stage finish in a huff, Astana’s Italian surged back. He dropped erstwhile leader Tom Dumoulin (Giant-Alpecin) and took enough of a lead to win the race when it finishes Sunday in Madrid.
In May’s Giro d’Italia, Aru seemed in a similarly dire situation, and he looked ready to crumble when it reached Aprica in the third week. He bounced back with force to win the final two mountain stages and to take second overall behind Alberto Contador (Tinkoff-Saxo).
The Vuelta started poorly in the south of Spain for his Astana team. Vincenzo Nibali, 2010 Vuelta and 2014 Tour de France winner, was ejected for taking a tow from his team car.
Aru carried the torch for Astana, but no one thought that Dumoulin would survive three weeks and contend for the overall. In the northwest of the country, in the race’s third week, he took the lead by three seconds after wining the time trial stage and doubled it to six seconds in Ávila Friday.
After failing to crack the 24-year-old Dutchman on Thursday, Aru was not ready to go home with the flowers for second. “My teammates and my team were motivated even with the hit we took yesterday,” Aru said after taking the red jersey. “We were motivated. It wasn’t going to be easy, though. I thought that today there’d be ground to attack, especially on the penultimate climb.”
Astana has come under fire over the last year for doping cases. It nearly lost its license in a battle with the UCI. Nibali’s moment of cheating did not help its image.
The team, however, should be applauded for the way it handled stage 20. It placed Andrey Zeits and Luis León Sánchez in an early escape. It upped the rhythm for Aru’s attack on the second-to-last climb. When Aru went, Mikel Landa joined, they rode free with the other favorites and left Dumoulin behind. Zelits and Sanchez dropped back to help increase Aru’s advantage heading to Cercedilla.
Aru, who appeared at rock-bottom 24 hours before, rode clear. After finishing second in the Giro this year and third last year, his 3:52-minute advantage over Dumoulin ensured that he would win the Vuelta.
“I learnt in the under-23 ranks that a race is never over or never locked in,” he added. “I tried to keep my head last night. Yesterday, Alessandro Vanotti took a hit, and he started regardless. Paolo Tiralongo fell in stage 2, had 18 stitches on his face, and wanted to race on. That showed me to keep on fighting.”
The post Aru goes from cracked to Vuelta king appeared first on VeloNews.com.

Velonews: Aru Happy To Have Nibali Alongside For Vuelta

Velonews: Aru Back From The Dead, Wins Cervinia