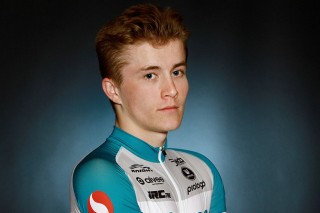 Photo courtesy of Safeway-Airgas Team.
Before he was old enough to vote, Austin Vincent had five national championships, and those medals came across a variety of cycling disciplines — BMX racing, cyclocross, and road racing. He took to cycling quickly and has thrived in the junior ranks, but this week, he’ll be up against a strong field riders in the U.S. under-23 nationals, but that, he says, is not affecting his confident outlook ahead of the 167-kilometer road race.
Born in Simsbury, Connecticut, Vincent was introduced to BMX racing at the age of four by family friends. After seven years of BMX and one national title, he was introduced to cyclocross. Using his skills from BMX, Vincent excelled. By the time he was 16 years old, he had two national titles in cyclocross, gave up BMX and moved on to road, and he soon had another national title, this time in criterium. Then in 2014, Vincent took third place at cyclocross nationals which rounded out his already impressive junior career. Austin currently rides for the Airgas-Safeway team where he says he has learned a lot from the older riders, including 2013 Vuelta a España champ Chris Horner. Now he has his sights set on his first under-23 road national championships.
Vincent is the middle child in his family, with an older and younger brother who both used to race BMX with him. He found that he had a bigger drive for the sport than his siblings, and that is why he stuck with it. His parents, although not cyclists themselves, are his biggest supporters. “They have been there for me through the good and bad times and it is really great to have that kind of support with those situations,” Vincent said.
As a top junior, Vincent has had to balance racing and studies, often taking time off school to go and compete. “I didn’t think the work was that hard. I had good grades, usually As or Bs for all my classes and my teachers were pretty understanding about the work getting done.
“I am planning on attending Central Connecticut State University or CCSU this coming fall and then hoping to take the spring off to concentrate on riding.”
Ahead of nationals, Austin trained in Nederland, Colorado with altitude coach Aldo Sfalcin, who runs the Colorado Cycling Camp out of Nederland. Sfalcin has been involved in cycling for 55 years and has spent 30 of those years coaching. Vincent said the work with Sfalcin was going well and that he had been adjusting well to the altitude.
Compared to Simsbury, Vincent found the culture in Colorado different but more inviting to the everyday cyclist. “Yeah, the cycling culture out here is a lot bigger than back at home,” he said. “Boulder really is a huge hub for cycling. That really became apparent last week when I was descending and saw a big group of riders climbing up the road. That sort of thing you don’t see back at home. Boulder or Nederland is a place I could see myself living in the future.”
As for the under-23 championships, Vincent said that he doesn’t feel the pressure going into Wednesday, despite the fact that most of his competitors have been racing at this level longer than he has. “I don’t think I need to worry. Yes, most of the guys who are racing are 19 [years old] and up but I don’t see an issue with that. I am pretty confident in my ability to hold my own,” he said.
“I am just going to let my legs do the talking.”
The post Austin Vincent goes for first U23 national title appeared first on VeloNews.com.