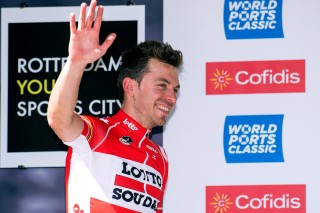 Kris Boeckmans, seen here at the World Ports Classic, has begun his rehab after a serious crash at the Vuelta a Espana. Photo: Tim De Waele | TDWsport.com
Kris Boeckmans, the Belgian rider who suffered a horrible crash at the Vuelta a España, is holding out hope of returning to the elite peloton.
Boeckmans, who rides for Lotto-Soudal, faced the press last week, barely 40 days after his horrific crash in stage 8 at the Spanish grand tour. After suffering terrible injuries, which led to a spell in a medically induced coma, as well as reconstructive face surgery, Boeckmans said he still wants to race his bike.
“I never thought of quitting as a cyclist,” Boeckmans said. “Cycling remains an important part of my life, and one day, I want to be the rider that I was before the crash. When I was watching the world championships, I could imagine myself riding in the peloton.”
Whether that happens or not remains to be seen. Lotto-Soudal vows to back Boeckmans, who had already signed a two-year contract extension before his Vuelta crash.
The 28-year-old faces an uphill battle. He suffered a concussion, a torn lung, and several facial fractures. He was in a medically induced coma for nearly two weeks, and is now going through rehab.
Team manager Marc Sergeant said the squad will give Boeckmans time to fully recover, and will leave the door open for a possible return to the elite peloton.
“We will keep supporting him in the coming two years to become a cyclist again,” Sergeant said. “We know that it won’t be [easy] to get back on the level he had before the crash, but nothing is impossible.”
If Boeckmans manages to return to the peloton, it will be the latest chapter in what’s been an incredible story his crash on August 29. According to teammates, it appeared that Boeckmans hit a pothole in the road while he was drinking from a bottle and landed hard on his face.
Boeckmans lay crumpled on the ground, prompting fears of the worse. Team doctor Servaas Bingé, who arrived immediately on the scene, revealed that Boeckmans’ condition was so bad that doctors prompted him into a medically-induced coma even before he could even be transported to the hospital.
“Almost immediately after the crash, I was on site,” Bingé said. “The first minutes, he was conscious but couldn’t talk much as he was in shock. Due to the facial fractures, there was a lot of blood coming out of his nose. This made it very difficult to hook him onto the artificial respiration machines. The urgency doctor of the Vuelta and myself immediately agreed that the best solution was to put Kris in an artificial coma. We did this on the spot before bringing him to the hospital.”
Doctors took Boeckmans off a respirator but put him back into a coma after discovering his lungs were injured. He returned to Belgium weeks later, when he underwent reconstructive facial surgery.
Now, Boeckmans is undergoing rehab sessions three times a week and is hopeful of returning to racing.
“What concerns us the most is his brain concussion,” Bingé said. “It’s not his first one and because of that the recovery takes a lot of time. By this time, he can start his [rehabilitation], but we need to be very careful that he doesn’t overdo himself.”
Boeckmans, who said he experienced strange dreams in the aftermath of the crash, said he can only ride a bike for five minutes at a time.
“The screws in my cheek can come out next week, they irritate me,” he said. “My headache gets worse if I need to concentrate for a long period. Every day, I stay in a dark room where it’s completely silent. By doing this, my brain concussion will recover the quickest.”
In 2015, Boeckmans enjoyed a breakout season, winning eight races, including Le Samyn and Nokere Koerse as well as the overall titles at the Tour de Picardie and the World Port Classic. Now he’s in the race of his life to try to return to the pro peloton.
The post Boeckmans hopes to return to peloton after horrific Vuelta crash appeared first on VeloNews.com.