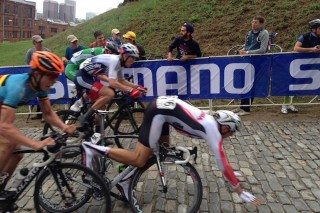 Austria's Patrick Gamper tumbles to the ground as his handlebars dangle off the front of his bike. Photo: Mike Prendergast
We posted a story over the weekend about Austrian junior Patrick Gamper’s scary crash during the junior road race at the world championships. Gamper’s steerer broke while he was climbing up the cobbled 23rd Street climb during the last lap of the race, which was won by his teammate Felix Gall.
Bianchi said they hadn’t heard about the crash and didn’t have any information (equipment in the junior ranks can be a mix of sponsorships, borrowed bikes, and shop deals), but Gamper got in touch with us this morning and suggested the damage came from an accident during the junior TT, when his bike flew off the roof of his follow car.
“My road bike was used as a spare during the ITT,” Gamper said. “Due to a poor fixing on the roof, it flew away in the left hander up to Governor Street. This was a pretty nasty crash for the bike, so I consider it a possible reason.”
Gamper finished the race in 69th place, on a spare Moots from Shimano neutral service—which uses titanium Moots for all race support in the U.S. That was impressive, considering the timing and severity of his crash. But he was hoping for more, especially after a flat during the time trial knocked him out of contention for a high finish.
“Although worlds were everything but lucky for me, I am at least not injured, despite a huge scratch on my upper leg,” Gamper said. “Nevertheless, I am totally disappointed, because I had real ambitions, and two times a top-15 place was taken from me.”

The post Broken steerer at worlds likely due to prior crash appeared first on VeloNews.com.

Velonews: Video: How To Fix A Broken Chain