Velonews: Cannondale Wants Us To Join The Cult Of Aluminum  But We’re Not Ready 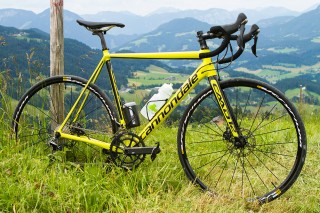 The new CAAD12 rides smoothly for aluminum and features a solid build. It didn't excel on the steeps, but it had a peppy feel. Photo: Dan Cavallari | VeloNews
KITZBÜHEL, Austria — The last time I rode an aluminum-frame road bike, I had hopped on it as a last-minute replacement for my own carbon bike. I didn’t realize it was aluminum, and I remember thinking, “Boy, this carbon frame sure is rough.” When I realized it was aluminum, I amended that to, “Boy, this aluminum sure rides smooth.” It certainly wasn’t the smoothest ride in the world, but I put away some miles on it and felt pretty good at the end. That’s a fairly strong endorsement for a frame material that has seen its heyday come and go.
Cannondale feels a little differently about aluminum, and its passion for alloy was on full display in Kitzbühel with the release of the CAAD12 frame. Cheekily dubbing itself the ‘Aluminati,’ Cannondale reaffirmed itself as a passionate defender of the much maligned alloy, citing its cult popularity among cyclists who have taken aluminum frames and put lavish build kits on them, particularly the CAAD10 frame. Granted, there are significant benefits to aluminum as a frame material, but when it’s pitted against carbon, it doesn’t stand a chance.
With the new CAAD12, Cannondale hopes to change that notion. In fact, it’s so confident in the new aluminum frame that it skipped CAAD11 altogether because it thought the new frame was just that good. Did it live up to expectations when we rode it?
Yes and no.
Let’s start with the yes. The ride quality of the CAAD12 was surprisingly good, and out on the road, chatter was muted, and the bike itself lively enough that I could envision riding it on a semi-regular basis. Cannondale achieved this finely tuned ride quality using a proprietary computer modeling system it calls Tube Flow Modeling, which essentially allows engineers to use computer software to figure out which tube shaping works best for compliance and stiffness.
SmartForm Alloy Construction combines several common aluminum construction types — hydroforming, taper butting, mechanical shaping, 3D forging, double-pass smooth welding, post-weld heat treat — to tailor the ride quality as much as possible. It’s labor-intensive, but Cannondale believes the payoff is worth it for an aluminum frame with what it believes is near-carbon-quality comfort.
Up front, a carbon fork takes on road chatter along with an hourglass-shaped head tube, optimized for stiffness. It’s a tried-and true combo that mates nicely with the ride-tuned aluminum frame, and as I climbed up what felt like a brick wall in the Alps, the bike did have a certain peppiness to it. That said, the CAAD12 felt heavy and geared too high for the terrain, though on paper, its weight is actually quite light. This sluggishness could be due to flex, weight distribution, or any number of factors. The bottom line is, it just didn’t feel as lively going up the steeps as carbon bikes generally do.
The CAAD12 I rode was equipped with Shimano disc brakes. Cannondale made a completely new direct-mount post for the rear brake that is mitered and then welded into the non-driveside chain stay, and it is touted as the strongest mount Cannondale has ever created. Did that translate into noticeable gains out on the road? Not really, but extra strength certainly doesn’t hurt, especially on steep, winding descents. There was no brake chatter to speak of.
Speaking of steep, winding descents, I was on the brakes pretty much constantly, and the disc brakes certainly have a learning curve to them. Light touch is key, but I did get a harmonic hum running through the frame that was distracting enough to be almost dangerous.
Like the SuperSix Evo Hi-Mod, the CAAD12 features a BB30A bottom bracket shell for extra stiffness. Also like the SuperSix Evo Hi-Mod, the chain stays are shaped to combine both stiffness and compliance, and the seat tube tapers for compliance. Let’s talk about that big C-word: Was the aluminum frame as compliant and therefore comfortable as carbon? Not quite, but it certainly was a comfy ride for an aluminum frame.
All told, I felt like I suffered a lot more on the CAAD12 than I did on the SuperSix Evo, but these bikes aren’t built for the same type of riding. If you’re looking for a light bike, spec’d with Dura-Ace, at an approachable price, the CAAD12 is quite good, though it has its foibles. It won’t climb like carbon, won’t descend like it either, but it’s no slouch and if you’re not racing, carbon might not matter much to you anyway, especially if the aluminum rides fairly comfortably.
Am I ready to convert to the Aluminati cult? Not quite, but for a serious rider in search of a good build at a lower price, drinking the Kool-Aid might not be a bad idea.
There are seven CAAD12 models ranging from the 14.8-pound Black INC model with Hi-Mod fork and Dura-Ace 9000, down to the 18.8-pound 105 model with stops in between. Pricing is not yet available, but you can expect to see these bikes hit the streets in mid-September.
The post Cannondale wants us to join the cult of aluminum — but we’re not ready appeared first on VeloNews.com.

Velonews: Craddock To Cannondale-garmin In 2016