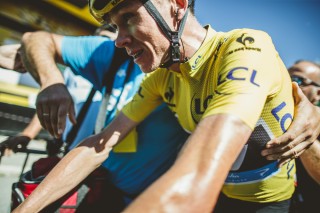 Photo: Jim Fryer | BrakeThrough Media | brakethroughmedia.com (File).
In an effort to quiet critics of his performances, Chris Froome released the most comprehensive look at the physiology of a modern Tour de France winner the sport has seen. The data, contained in a Thursday story in Esquire UK, comes from tests performed in August at the GlaxoSmithKline Human Performance lab in England and in 2007 at the UCI’s World Cycling Center in Switzerland. It is summarized, with a few explanations, below.
Weight:
Chris Froome weighed 69.9kg (154.1lbs) when he was tested in August, up 2.9kg from his Tour race weight of 67kg (a figure provided by Froome but unconfirmed independently). On test day, he was 9.8% body fat.
The tests:
Three tests were performed in August: two submaximal tests, one in the cold and one in warm temperatures, with a VO2max test in between.
Submaximal tests provide insight into how well Froome can sustain power.
VO2 is measured in milliliters of oxygen consumed per kilogram of bodyweight per minute. Most amateur cyclists will sit between 40 and 60. Most professionals are over 70. The test involves a slow ramp in wattage output until exhaustion and is understandably miserable.
VO2 is not a perfect indicator of performance. Efficiency and sustainable power are also required for a clearer picture.
The same tests were performed in 2007 when Froome was at the UCI’s World Cycling Center.
VO2 results:
In August, Froome returned a result of 84.6 mL/kg*min.
Since VO2 includes weight, that result can be recalculated for Froome’s race weight of 67kg. His VO2 is then 88.2.
For reference, Greg LeMond is said to have had a VO2 of 92.5.
In 2007, Froome’s VO2 was 80.2, still very high. He also weighed 8kg more, and was 16.9% bodyfat; the loss of this weight is the source of most of the change.
Power results:
Froome’s sustained power remained mostly unchanged from 2007 to 2015.
He produced a peak power of 525 watts in 2015, 15 watts lower than the 540 he produced in 2007. Peak power is most often defined as the maximal average power held for either 30 seconds or one minute during a VO2 max test — but the Esquire article does not specify the protocol.
His sustained power changed just 1 watt, going from 420 in 2007 to 419 in 2015. Sustained power is defined as the power Froome could hold for 20-40 minutes.
Blood results:
Froome also released data from two biological passport (ABP) tests, one from July 13, 2015, on the Tour’s first rest day, and a second from August 20, three days after his testing in England.
On July 13, he had a hemoglobin (red blood cell) level of 15.3 grams per liter. He had a reticulocyte level of .72 percent. He had an off-score of 102.1.
On August 20, hemoglobin was at 15.3g/l once again, and reticulocyte level rose slightly, to .96, with an off-score of 94.21.
Reticulocytes are immature blood cells. The figure drops when blood cell production is repressed, as by blood transfusions, and rises when it is stimulated, as by EPO. Normal adult range is .5 to 2.5 percent.
Off-score is a measure of the rate of red blood cell creation. Normal levels vary, and are established within the biological passport’s software for each individual.
The post Chris Froome by the numbers appeared first on VeloNews.com.

Informative post....I must say.. Thank-you so much.
You must log in or register to reply here.

Talking the Talk: A chat with Chris Horner in Philadelphia (VeloNews)