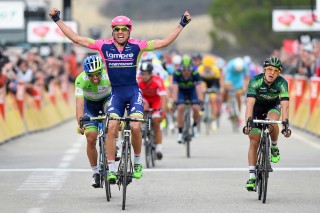 Davide Cimolai passed Bryan Coquard in the final meters of Paris-Nice stage 5 to take the win. Photo: Tim De Waele | TDWsport.com
Lampre-Merida’s Davide Cimolai sprinted ahead of Bryan Coquard (Europcar) and Michael Matthews (Orica-GreenEdge) to take a victory at the slightly uphill finish of Paris-Nice stage 5. The peloton almost missed its opportunity on the day, as Lotto-Soudal’s Thomas De Gendt managed to survive up the road into the waning moments of the stage, but the breakaway-driving Belgian was caught with less than a kilometer to go in Rasteau after 192km of racing.
De Gendt, Andrew Talansky (Cannondale-Garmin), Egor Silin (Katusha), Romain Sicard (Europcar), and Pawel Poljański (Tinkoff-Saxo) fought to make it into a breakaway move early in the day. De Gendt, already leading the king of the mountains competition, nabbed KOM after KOM throughout the stage, but still retained enough energy to drive the pace in the break as the group neared the finish with the peloton closing the gap behind. Sicard and Poljanski were eventually distanced, and then Talansky and Silin, until only De Gendt remained at the head of the race in the final kilometer, with the peloton increasing the pace in preparation for a sprint. Inside the final five hundred meters, the pack caught and passed De Gendt.
At the front of the peloton, Coquard launched his sprint first, and Cimolai latched onto his wheel, with Matthews just behind. Coquard led into the final seconds of the race but Cimolai came around him inside the last hundred meters to narrowly take the stage victory.
For the 25-year-old Italian, it was the second win of the season after a victory in the Trofeo Laigueglia in February. For Lampre-Merida, it was the first WorldTour win of the year.
Race leader Michal Kwiatkowski (Etixx-Quick-Step) finished with the peloton and retained his yellow jersey, with Team Sky’s Richie Porte and Geraint Thomas also holding onto their second- and third-place positions, respectively.
Paris-Nice continues with a 184.5km stage from Vence to Nice on Saturday.
The post Cimolai takes Paris-Nice stage 5 after De Gendt caught inside final kilometer appeared first on VeloNews.com.