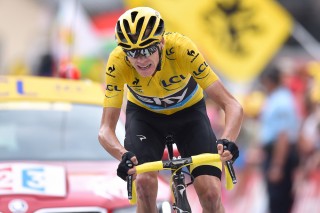 To some, Chris Froome's incredible Tour de France performances aren't credible, but the two-time champ hopes that publicizing his physiological data will change that. Photo: Tim De Waele | TDWsport.com (File).
Chris Froome delivered on his promise to reveal more details about his power data, but he will quickly discover that trying to change hearts and minds will prove more difficult than climbing Mont Ventoux.
As promised, the two-time Tour de France champion underwent independent physiological testing this summer and revealed some of the data late on Thursday. It could provide an in-depth look at what it takes to win the Tour — both an X-ray of Froome’s ability, and what he hopes will be salve to his fiercest critics.
The information was released via an unlikely venue, the UK version of Esquire magazine. The lad’s mag is better known for its coverage of shoes and watches than cutting-edge cycling science, but Froome’s data dump will certainly attract eyeballs.
Froome revealed some numbers, like his VO2max (84.6 while not in peak form) and watts-per-kilo (5.98, again not his peak), but will it change opinions? Probably not.
Despite his well-intentioned attempts at transparency, Froome will likely face fierce headwinds when it comes to convincing skeptics that he’s winning the yellow jersey on pan y agua. Why? Right or wrong, it seems most people have already made up their minds about Froome.
After being hammered by one doping scandal after another, some cycling fans simply cannot and will not accept that someone could win the Tour de France clean. This ingrained skepticism come from a fear of being caught out again believing what many insist is unbelievable. No one wants to be taken for a sucker once more.
That’s a natural reaction to anyone who was charmed and seduced by the peloton over the past 20 years, yet there is a danger of looking at the today’s peloton with the same lens used during the Armstrong era. In fact, Froome supporters insist that the skeptics and cynics are blind to what could be the most amazing story of all: a clean Tour de France winner.
Fair or not, Froome and his peers are painted with the same brush as the pros from the EPO and transfusion generations that spanned the 1990s and 2000s. To some, it seems implausible that sport so rife with corruption and deception can suddenly change tack. Froome contends his victories are legitimate, and he’s done a stand-up job in trying to convince the larger public that he’s racing and winning at a higher standard than previous generations of cyclists. Day in and day out, he patiently answers every journalistic inquiry, and he’s been outspoken about encouraging more anti-doping controls. In many ways, he’s been textbook in how to deal with the thorny questions that continue to plague the sport. But many roll their eyes, and grumble, “just wait 10 years, then we’ll see.”
Even with the introduction of the biological passport, the no-needle policy, 24-hour testing windows, and a battery of improved anti-doping controls, there remain a very large percentage of fans and media who believe that cycling at its core remains a dirty sport.
Froome isn’t the first pro to share training data. Chris Horner posted his power numbers during his victory at the 2013 Vuelta a España, and Ivan Basso shared his output via Twitter and other media in his return in 2010, when he worked with ground-breaking trainer Dr. Aldo Sassi.
Even under the guise of an independent testing not affiliated with Sky, Froome’s numbers will likely raise more questions than answers. Numbers alone don’t prove anything, and they can be manipulated. And that will rankle the skeptics this week. When Froome released a slice of his power numbers from the 2015 Tour de France’s stage at La Pierre-Saint-Martin, many suggested that Sky’s coaching staff rounded up Froome’s numbers to make them palatable.
The one-off tests conducted this summer in London won’t be enough to convince the doubters, who will be calling for more data, more numbers, and more depth. To be truly convinced, the cynics will want to see Froome’s numbers from the entire season. One controlled training session won’t be able to put out the fire, and in fact, it could fan the flames.
But Sky is loath to see more information revealed. Sky’s coaching staff considers Froome’s power numbers to be their competitive advantage, and in a sport that is predicated on power output, even the hint of Froome’s data is akin to giving away the house secrets.
It’s clear that Froome and other top-end riders are redefining the outer limits of what is considered credible. Teams are adding up marginal gains to create, at least in the eyes of some, what appear to be unbelievable performances. At some point, there is a “new normal” that will push the edge of envelope.
Froome’s bid to transparency won’t quiet his detractors, but his efforts should be lauded. Though he’s not everyone’s cup of tea, Froome is exemplary both on and off the bike, and unlike other riders who hide behind silence or who lack the courage to rock the boat, Froome stands up for his beliefs. Some suggest it’s little more than window dressing and good PR, but there is a sense of authenticity in Froome’s efforts to reveal some of his most-guarded numbers.
Froome’s data dump might fall short of quelling the debate — and could even fan the flames of incredulity — but it’s an important first step and should serve as example for other riders to follow.
The post Commentary: Froome data won’t change hearts and minds appeared first on VeloNews.com.

Velonews: Commentary: Paying To Ride In The Peloton

Velonews: Commentary: Cycling Shoots Itself In The Foot, Again