Velonews: Commentary: Paying To Ride In The Peloton 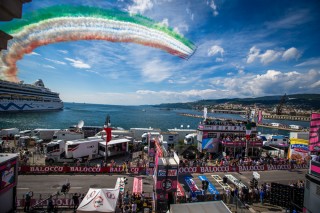 Pay-to-race schemes are happening at the lower levels of Italian cycling, according to a report. Photo: BrakeThrough Media | brakethroughmedia.com
We should not be surprised that a rider will do anything to turn professional when he’s already done everything — training, pain, sacrifice — to arrive at the brink of his dream.
Last week, Italian paper Corriere della Sera published details of widespread pay-to-ride schemes within the lower tiers of pro cycling, and within Italian Pro Continental teams in particular, in which riders pay their way onto the professional circuit, often by returning much or all of their salaries to team management via secret bank accounts and other illicit techniques. We should not be surprised — but we should be angry.
Pay to play is nothing new in sport. It’s common within Formula One, where “pay drivers” like Michael Schumacher and Nikki Lauda have gone on to become icons. But there are two distinct types of pay to play. One, the F1 model, is generally accepted, if not exactly applauded. The other is clearly illegal and immoral.
The range of offenses described in Corriere appear to fit into both categories.
On the exploitative side are allegations that riders were forced to pay most or all of their own salary — to the tune of 25,000 to 50,000 euros, according to a rider’s agent interviewed by Corriere — back into the pockets of the team, a clear perversion of the usual contract and salary process. Where the cash goes once it leaves the rider’s hands is mostly unknown.
Corriere quotes Matteo Mammini, who was sixth in the Under-23 time trial at the 2010 Road World Championships, as having taken out a 50,000 euro bank loan in order to secure a spot on an Italian team. In the end he backed out, retired, and used the cash to start a pizzeria.
Such a system is a way for teams to get around the UCI’s minimum salary for Pro Continental teams, 23,000 euros for neo-pros. At best, the salaries go back into the team coffers. At worst, team management is skimming the money as a fee for allowing a rider the privilege of kitting up and racing. Both are deplorable.
This system stands on contrast to well-known pay-to-play systems in other sports, wherein an athlete brings along sponsorship money equal to or greater than his own salary. Such arrangements are common in F1. Some argue that’s to the sport’s detriment.
In 2014, Sauber driver Adrian Sutil described the financial demands many teams now make of drivers as “out of control.” He and his teammates were replaced in 2015 by drivers who came with more financial backing. Were they better drivers? Perhaps, perhaps not. They had enough cash that it didn’t matter.
Corriere’s report contains examples of this more benign, but still troubling, type of pay-to-play model. The manager of Southeast, Angelo Citracca, defended a transaction in which he hired Ramon Carretero, who raced poorly and then tested positive for EPO at the Tour of Turkey, because his father helped find a title sponsor for the team.
Sometimes, a sponsor simply follows a major rider around the sport. Think of Specialized’s association with Alberto Contador, or, up until this year, its relationship with Mark Cavendish. This is not pay to play. The difference lies in who does the negotiating, whether a sponsor deals directly with a team or negotiates first with the athlete.
If athletes are expected to come to the table with sponsors or money behind them, then their selection is no longer based on the values of sport. It is particularly important to keep these deals away from a sport’s lower tiers, where athletes are more desperate.
Across the ethical spectrum of pay-to-play arrangements, from stolen salaries to using deep pockets to secure a roster slot, there is one certainty: any system in which financial concerns rise above athletic ability is a danger to the sport’s talent pipeline, its ethical standing, and thus its future. We should not be surprised that young riders will do anything to make it. We should be intolerant toward those older and wiser forcing them to do so. In stealing from its young riders, Italian cycling only shoots itself in the foot.
The post Commentary: Paying to ride in the peloton appeared first on VeloNews.com.

Velonews: Commentary: Cycling Shoots Itself In The Foot, Again