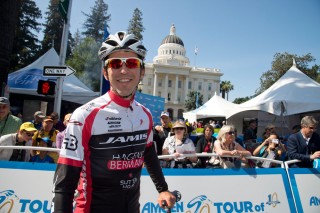 Ben Jacques-Maynes started the 2015 Amgen Tour of California as the only rider to compete in all 10 editions of the race.
Photo: Casey B. Gibson | www.cbgphoto.com
Around noon, California time, on Monday, Ben Jacques-Maynes posted a tweet that he hoped would help him start chipping away at his medical bills, which were sure to be sizable after a bad crash in the Amgen Tour of California.

I’m selling some new cycling gear in anticipation of big medical bills! Help me out by passing this on! https://t.co/vRKAP36S26
— Ben Jacques-Maynes (@Benjm1) May 18, 2015

Though the Jamis-Hagens Berman rider had taken a somewhat lighthearted approach to the crash last week, tweeting jokingly about his banged-up face, things had taken a more serious turn.
Jacques-Maynes, 36, winner of last year’s king of the mountains competition at the USA Pro Challenge, was in need, and the cycling community responded quickly.
At first, friends and fans shared his tweet about the gear sale. Some asked how they could send money — they didn’t need new kit or weren’t the right size.
Cycling’s tightly knit social media circle began to buzz, and by dinnertime, Larry Moray, a dentist and owner of The Happy Tooth Dental Group, which sponsors the Pepper Palace and BMW-Happy Tooth women’s teams, along with Team SmartStop, offered to help. Cyclingnews‘ deputy editor Laura Weislo said she’d donate her airline miles to fly Jacques-Maynes from his home in California to Moray’s office in North Carolina.
Then, that evening, two of Jacques-Maynes friends started a Go Fund Me page, and in 10 hours, more than $10,000 had been raised.
This whirlwind saga illustrates the cycling community’s connectivity and generosity, but it also highlights how exposed professional cyclists are to dangers on the road and complications afterward.
The post Community rallies to support injured Ben Jacques-Maynes appeared first on VeloNews.com.