Velonews: Craddock On Dumoulin: we’re Just As Surprised As Everyone Else’ 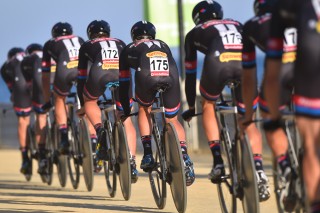 Lawson Craddock (No. 172) and his Giant-Alpecin teammates are enjoying riding for Vuelta leader Tom Dumoulin. Photo: Tim De Waele | TDWsport.com
Tom Dumoulin (Giant-Alpecin) has been the revelation of this Vuelta a España. No one expected the 24-year-old Dutchman to win two stages and carry the leader’s jersey into the homestretch of the Spanish grand tour.
Perhaps more surprised than even Dumoulin are his Giant teammates, who came here to hunt for breakaways and support John Degenkolb in the sprints. No one started in Malaga on August 22 expecting to be in the trenches fighting for the red leader’s jersey going into the final weekend.
“We’re just as surprised as everyone else,” Giant rider Lawson Craddock said. “We came here hoping to win some sprints with John, and Tom was an unknown. He was coming back to redeem himself after crashing out of the Tour de France, and his form was unknown to us, and even to him.”
And what a surprise it’s been. Dumoulin beat Chris Froome (Sky) on the Cumbre del Sol in stage 9, and then stayed close across a string of savage climbing stages, only to win his second stage in Wednesday’s time trial to take a narrow, 3-second lead going into the four closing stages.
Craddock said everyone on the Giant team simply cannot believe it.
“When Tom won [on Cumbre del Sol], at dinner that night, he was saying, ‘What did I do? How did I do that?’” Craddock said. “It’s pretty surreal to all of us.”
The 23-year-old Texan has been one of the key riders to help Dumoulin over the Vuelta’s endless sea of mountains. Though Dumoulin has been isolated on the final, steep summit finales, Craddock was often the last man standing for the Giant riders.
That shouldn’t come as a surprise. Giant brought Degenkolb and Luka Mezgec for the sprints, with riders such as Koen de Kort, Tom Stamsnijder, and Johannes Frohlinger to chase down breakaways and set up the sprinters.
Dumoulin kept hanging in there, and the team had to reset its priorities. They are still hunting for a stage win for Degenkolb — who’s twice been second and once third as he prepares for the world championships — but the team suddenly found itself in the middle of a GC battle it wasn’t expecting.
“The mood around the dinner table has been pretty tired. Every day, we’ve been on the limit, and Tom has been pushing himself harder than he’s ever pushed himself before,” Craddock said. “For so long we’ve been a sprinting team, and now to be able to fight for GC in a grand tour has been really cool for all of us. You could tell early on in this Vuelta that Tom had great form.”
Craddock making the grade
For Craddock, the chance to ride in support of Dumoulin is an important milestone. After solid results in his rookie pro season, including third overall at the 2014 Amgen Tour of California, he suffered a horrible, high-speed crash at his season debut at the Santos Tour Down Under in January in Australia. He was sidelined until March and wasn’t in his best condition for California.
After coming close to winning a stage at the Tour of Poland, with a third-place result on the final day, Craddock came to the Vuelta intent on finishing his first grand tour. Last year, worn out and sick, he was forced to abandon after two weeks.
“I really worked hard to come back, and it took me longer than I expected to get back to my top fitness after my crash. I am looking forward to fighting to make it all the way to Madrid,” he said.
“What a difference a year makes. Last year, I didn’t even make it to stage 14, because I was so dead. For me, it’s been a big step in the right direction. The difference from where I am now compared to where I was last year, it’s very encouraging.”
Throughout this Vuelta, Craddock has been doing the best he can to help Dumoulin stay in the fight for the red jersey.
With only four days to go, Giant could be celebrating its first grand tour podium, and perhaps an outright victory.
“It’s been awesome to be part of a team fighting for a podium in a grand tour. It’s been a really cool experience,” Craddock said. “The great thing we have about this team is the friendship that we share, and we all love racing together. It’s been a really great experience.”
The post Craddock on Dumoulin: ‘We’re just as surprised as everyone else’ appeared first on VeloNews.com.

Velonews: Craddock To Cannondale-garmin In 2016

Velonews: Craddock Set To Soak In Experience At Liege