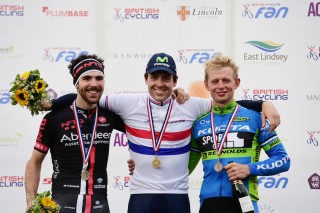 Alex Dowsett (Movistar) won his fourth elite British national time trial championship in late June. Allan McKenzie/SWpix.com
SYDNEY — Recent hour-record holder Alex Dowsett (Movistar) left little doubt as to his time trial prowess after capturing his fourth British national championship on Thursday, June 25, at the ‘mini-Nürburgring’ in Cadwell Park, England.
However, what immediately came into question following the 26-year-old’s win was whether or not his tally of four time trial titles equals the number recorded by retired Olympian Stuart Dangerfield as the British Cycling press release stated on the governing body’s official event website immediately following the race.
Dangerfield took issue with the report and was quick to set the “record” straight to clear up any confusion following the erroneous statistic published by British Cycling, which was later mistakenly picked up by media outlets around the world, including VeloNews.
“I’ve won six national time trial titles, not four,” Dangerfield told VeloNews upon learning of the slight. “British Cycling held the inaugural time trial championships in 1995, which I won, along with 1996, 1998, 2001, 2003 and 2005.
“My first win in ’95 was the first race that was considered the British Cycling Federation individual time trial championships, as at the time we also had the Road Time Trial Council (RTTC), which had its on set-distance titles, such as a 10 mile, 25 mile, 50 mile, etc.
“But that initial race was the first time the British championship colors were on offer — and I won them.”
Dangerfield went on to successfully defend his title in 1996 before losing to Graeme Obree in a close race in 1997. Dangerfield would reclaim his title in 1998 before trading wins with Chris Newton and Michael Hutchinson over the next seven years.
When asked to verify the correct number of championships won, British Cycling emailed VeloNews a document that indeed backed Dangerfield’s claim, but did not offer any statement or make any corrections to the original story as of press time.
The Wikipedia pages for both Dangerfield and Dowsett still incorrectly claim the pair are tied at a “record four wins” each, while the British national time trial championships page only dates back as far as 1997 — clearly omitting Dangerfield’s back-to-back wins that started it all.
“I’m happy for Alex [Dowsett] as he is doing a fantastic job,” said Dangerfield, 43, who now works as a chief mechanic and bike-fitter for The Lab in Sydney, Australia. “He is at a higher level than what I was when I was racing.
“I’d just like to set the record straight, as I am very proud of many things in my cycling career and owning six national titles is most definitely towards the top of the list.”
“But at the end of the day, my name is on that annual trophy six times and there is no denying that,” concluded the three-time Commonwealth Games representative and 2001 10-mile (16km) time trial record holder. “Alex still has a couple more to go if he wants to catch me.”
Aaron S. Lee is a cycling and triathlon columnist for Eurosport and a guest contributor to VeloNews
The post Dangerfield calls out British Cycling for overlooking two of his six TT titles appeared first on VeloNews.com.