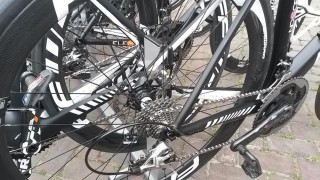 Team Roompot posted this photo of its disc brake-equipped bikes at the Eneco Tour. Photo: Team Roompot Twitter
Disc brakes have been used in professional road racing for the first time.
Three riders on Team Roompot, a Dutch Pro Continental team, are using SRAM’s Red 22 HydroR hydraulic disc brakes at the Eneco Tour this week, marking the first time discs have been ridden in professional road racing.
Wholesale legalization of discs is still a year or so away, but the UCI is allowing teams to test the technology in races in August and September.
SRAM worked closely with the Roompot mechanics and riders for training and setup, and the company was “eager to test-race the bikes,” according to Michael Zellmann, SRAM’s PR and media manager. Eneco marked the company’s first opportunity to do so.
“We see hydraulic brakes playing a significant role in the advancement of performance road bikes, they are simply a better system in all conditions,” Zellmann said.
Not all pros, or manufacturers, agree. But the march toward discs in road racing seems increasingly inevitable.
Bringing an entire industry together along with teams, mechanics, and riders, will take time — much more than the two months the UCI has allotted for testing in 2015.
Since the UCI’s April announcement that it would allow disc test runs in August and September, manufacturers and teams have scrambled — some more energetically than others — to pull together the required equipment. Though teams indicated early on that test runs at the Tour of Utah and the USA Pro Challenge were likely, Utah passed without a rotor in sight, and a dozen teams contacted by VeloNews have all shelved plans to test in Colorado.
Why is it taking so long? The path to road discs is not without hurdles.
Many frame manufacturers don’t have race-ready disc frames available, as they chose to roll out the technology on more casual, endurance-style frames. Trek only has discs on the Domane, Cannondale brought them to the Synapse, and Giant to the Defy, for example. All fit and handle differently than their race-bred siblings, the bikes that pros are accustomed to riding.
Further test runs at the Vuelta a España are likely. Trek Factory Racing is planning to test discs in Spain using custom-built aluminum frames, according to the team’s Trek Bicycles liaison, Matt Shriver. A mechanic for Cannondale-Garmin, which has its service course in Girona, Spain, indicated at the end of the Tour de France that a Vuelta test was likely for that team as well, using Synapse disc frames.
BMC will not provide disc bikes to its team in 2015, technical representative Stefano Cattai said. Specialized is keeping any plans, or lack thereof, close to its chest, declining to comment on the use of discs within its WorldTour squads, Tinkoff-Saxo and Astana.
Mavic, which provides neutral support wheels to races on both sides of the Altantic, has been preparing for discs since the UCI announcement in April, according to brand manager Chad Moore. The company is working with teams to make sure the Ksyrium Disc wheels inside its bright yellow support cars have the right rotors and, when possible, the right axle standards, Moore said.
Having the right neutral wheel won’t always be possible, at least not at first, as axle types and rotor size remains remain subject to debate. It does appear that a 142×12 rear thru-axle standard is set to take hold in a big way, but manufacturing lead times dictate that many of the frames currently available are still off the back. With all the axle and rotor variables currently in play, Mavic, or any other neutral wheel supplier, would need more than two dozen wheels in each car just to cover all the possibilities.
The test period was requested by team organization AIGCP, not industry group WFSGI, which has long lobbied for discs’ eventual inclusion in pro racing but favors a slightly slower transition as some of its members are yet to bring disc products to market.
Neal Rogers contributed to this report.
The post Disc brakes enter the pro peloton appeared first on VeloNews.com.

Velonews: Uci To Lift Ban On Disc Brakes In August