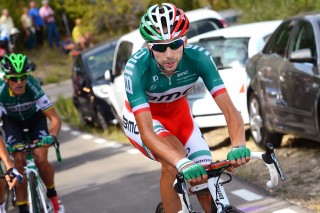 Ivan Santaromita wore the Italian colors after winning the 2013 national championship. Photo: Tim De Waele | TDWsport.com
Ivan Santaromita, the former Italian national champion, will ride for SkyDive Dubai in 2016, reported La Gazzetta della Sport.
The 31-year-old climber, one of a handful of bigger names still without a contract late in the season, expressed his relief at his new, one-year deal.
“The last two years have been hell,” Santaromita told La Gazzetta dello Sport. “I’ve had enough. I will be able to return to the top with Skydive.”
Santaromita turned pro with Quick-Step in 2005, and raced three seasons each at Liquigas and BMC Racing, where he was a favorite teammate of 2011 Tour de France winner Cadel Evans. After two winless seasons at Orica-GreenEdge, he said he needed a change.
“It’s true that Skydive is only ‘Continental,’ but I have spoken with [team managers] Alberto Volpi and Ricardo Martins, but they assured me it’s a valid project,” he said in the report. “I am happy. I’ve accepted a one-year deal, but maybe I will stay longer if things go well.”
Skydive debuted in 2014, and includes a mix of north African and Middle Eastern riders and a sampling of European pros, such as Francisco Mancebo, Andrea Palini, and Vladimir Gusev.
Santaromita is the latest among a handful of experienced pros still waiting on the sidelines for a ride for next season.
Other top names include Filippo Pozzato (Lampre-Merida), who’s been linked to Southeast, and Igor Antón (Movistar), the Basque climber. Ronaldo Nocentini (Ag2r La Mondiale), Chris Sutton (Sky), John Gadret (Movistar), Brett Lancaster (Orica-GreenEdge), and Kristof Vandewalle (Trek Factory Racing) are among some of the other top names still holding out hope for another year in the peloton.
The post Ex-Italian champ Santaromita signs with Continental Skydive appeared first on VeloNews.com.