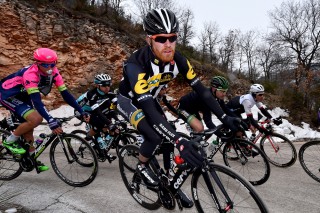 Tyler Farrar is being considered by MTN-Qhubeka for its Tour team next month. Photo: Tim De Waele | TDWsport.com
American Tyler Farrar is on the long list to race the 2015 Tour de France for wildcard MTN-Qhubeka next month as the team is set to make history as the first African-registered squad to race the French grand tour.
Eleven riders were named to the “long team” by team management, which will be whittled down to nine in time for the July 4 start in Utrecht, Netherlands. Seven African riders are among the nominees as the team promises to pay homage to its African roots during this summer’s Tour.
“We are looking forward to the Tour and to make history,” said head sport director Jens Zemke in a team release. “It is the first time that an African-registered team rolls to the start line of the ‘grand boucle,’ and we want to leave a good impression. We have chosen a well-rounded squad to do so.”
It looks likely that former Tour stage-winner Edvald Boasson Hagen and South African national champion Jacques Janse van Rensburg will both be present. Louis Meintjes and at least one of the three Eritrean trio of Merhawi Kudus, Daniel Teklehaimanot and Natnael Berhane will also likely to get a nod.
Joining Boasson Hagen and Farrar on the international set is British rider Steve Cummings and Belgian Serge Pauwels.
Farrar, 31, was among one of MTN’s high-profile signings coming into 2015. A winner of stages in all three grand tours, Farrar has been knocking on the door for a victory all season, with five top-5 results in sprints during the spring.
MTN, a Pro Continental team, has won nine races so far in 2015, but none at the WorldTour level. Boasson Hagen crashed out of the spring classics, but bounced back to win a stage at the Tour de Fjords last month. Meintjes won a stage and the overall at Settimana Coppi e Bartoli while Reguigui won a stage and the overall at the Tour de Langkawi.
MTN-Qhubeka long list for Tour de France
Edvald Boasson Hagen (NOR)
Natnael Berhane (ERI)
Steve Cummings (GBR)
Tyler Farrar (USA)
Jacques Janse van Rensburg (RSA)
Reinart Janse van Rensburg (RSA)
Merhawi Kudus (ERI)
Louis Meintjes (RSA)
Serge Pauwels (BEL)
Youcef Reguigui (ALG)
Daniel Teklehaimanot (ERI)
The post Farrar on Tour de France long list for MTN-Qhubeka appeared first on VeloNews.com.