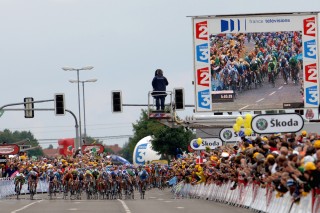 The last time the Tour de France visited Germany, 2005, Robbie McEwan won a sprint finish in Karlsruhe. Photo: Tim De Waele | TDWsport.com
There’s been a lot of loose talk this week about grand tour starts, especially concerning the Giro d’Italia. But ignore the U.S. and Japan for now and consider Germany, a country whose recent resistance to the Tour de France may finally be coming to an end. Dusseldorf’s city council just voted to bid for the Tour de France’s 2017 Grand Départ.
Germany has been particularly cool toward pro cycling since the doping scandals of the early 2000s. It’s been 12 years since the country hosted a stage, and 28 years since it hosted a Grand Départ. German broadcasters even briefly stopped airing the Tour in protest of an era that saw the powerhouse T-Mobile team become emblematic of doping and German beverage brand Gerolsteiner walk away from its team sponsorship.
But in 2015, German sprinter André Greipel stormed to four stage wins in a race that also saw his countryman Tony Martin briefly in yellow. A Tour start on German soil could continue the positive trend started by them and fellow German stars Marcel Kittel and John Degenkolb.
Still, the final vote of Dusseldorf’s city council was squeaker, just 40–39 in favor, which suggests the Tour won’t be welcomed back across the Rhine with completely open arms.
Part of the reason for the close vote was economics. For host cities, a Tour start isn’t always a slam-dunk. Reports from German media say the Dusseldorf vote hinged largely on a study indicating that hosting would cost the city 6.2 million euros and deliver up to 57 million euros in revenue for hotels, restaurants, and other businesses. Yet London recently decided to walk away from a bid for that same 2017 Tour start after officials decided that it wouldn’t make financial sense.
Even in Germany, potential allies like the German Cyclists’ Federation (ADFC) have voiced skepticism over hosting the Grand Départ. The organization (confusingly not affiliated with the German Cycling Federation, which supports the bid) told The Local that it felt the Tour would do little to advance the interests of average cyclists in the city. AFDC’s 2014 study of German cities’ respective bike-friendliness ranked Dusseldorf 34th out of 39 German cities. (Munster topped the list.)
Okay. There’s no guarantee that the Tour’s pageantry would do anything to advance the cause of German cyclists. But it is an opportunity. Take Richmond, Virginia, host of the 2015 UCI World Road Championships. The town is no cycling epicenter (compared to other U.S. hubs like Boulder, Colorado, or Asheville, North Carolina), but local organizers used the event to advance causes like bike safety courses for children and “share the road” partnerships.
So let’s hope, for cycling in general — and the Tour in particular — that the vote in Dusseldorf marks the beginning of a new era.
The post Finally: German city votes to host Tour’s Grand Depart appeared first on VeloNews.com.