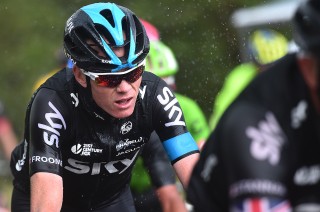 With a Critérium du Dauphiné win in his pocket, Chris Froome (Sky) heads into the Tour de France with confidence. Photo: Tim De Waele | TDWsport.com
MILAN (VN) — Chris Froome is polishing off his Tour de France preparation this week before traveling to the race start in Utrecht, Netherlands, but is unable to avoid the subject of doping. When asked if he had ever missed an anti-doping test, he revealed that he did earlier this year while on vacation in Italy.
Team Sky’s captain took full responsibility and spoke about how he sees himself as a role model for cycling. He said, “You can ride clean in this day and age, and you can win the biggest races clean.”
Athletes are given leeway for missed controls. Three in a 12-month space, however, results in an anti-doping violation and possible ban. Dane Alex Rasmussen served a suspension for missed controls in 2011.
“I had a couple of recovery days; I took my wife to a hotel down in Italy,” Froome told journalists in a conference call Wednesday.
“The first morning we were down there, the authorities came at seven o’clock, the hotel staff refused to let them call up to the room. When we came down for breakfast, they said to us ‘Oh, anti-doping guys were here to test you this morning, but it’s our policy not to let anyone disturb our clients.'”
Froome appealed the missed test to authorities, but explained that he takes responsibility for the incident.
“I could’ve been more proactive in letting the hotel know that it was a possibility I could best tested,” Froome added. “I’ve stayed in hotels all over the world, been tested all over the world, but unfortunately I didn’t see this one coming.
“It definitely opened my eyes. It’s always the athlete’s responsibility to make himself available for testing.”
The issue will come to nothing as long as Froome does not miss other tests. Such missed controls are only reported if there is a violation of three, otherwise it flies under the radar. Froome brought up the issue when the question of missed controls was put to him directly.
Froome came under fire on his way to winning the 2013 Tour de France in the wake of the 2012 Lance Armstrong affair. He also had to explain an expedited therapeutic use exemption (TUE) leading up to the Tour of Romandie in 2014.
However, he said that he sees himself as a role model and uses his position for change. He added that is why he wrote on Twitter about the lack of anti-doping tests on the Spanish island of Tenerife ahead of the 2014 Tour de France.
“We kept going up there year after year. We’d come back and be asked if we were tested, every year the answer was ‘no.’ Something wasn’t right,” Froome continued.
“Many people [are] using it as a key preparation ahead of the Tour de France, and there was no testing. It was important to point it out to the authorities that this seemed to be a bit of an oversight. As far as I’ve seen, it’s been rectified. This year, I was tested at least four times during the period we were up there.”
Froome is now concentrated on the Tour de France, which starts July 4 in the cycling-mad city of Utrecht. The race kicks off with a short time trial, races up the Mur de Huy, covers cobbles in stage 4, and ends the first “crucial” nine stages with a team time trial.
“That first week is going to be crucial, until we get to the mountains on stage 10. Each stage is like a classics race in its own right, like nine one-day classics. Before you get through that you are not even entered in the classification race in that regard,” added Froome.
“The team performed well in the classics this year and hopefully some of those riders are on the team and will help me get through the first nine days.”
Last year, Froome crashed and broke bones in his hand and wrist. He had to abandon the race in stage five. This year, his lead-up to the Tour has gone smoothly with wins in races like the Critérium du Dauphiné ahead of American Tejay van Garderen (BMC Racing) two weeks ago.
Froome spoke about his rivals, but such is his confidence that he said, “I respect all my rivals, but I don’t fear anyone at this point.”
The post Froome polishes off Tour prep, explains missed drug test appeared first on VeloNews.com.


View the full article
Reactions: CypemernAppef
You must log in or register to reply here.