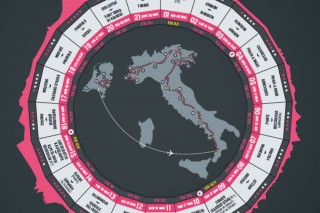 The 2016 Giro d'Italia route will feature three different individual time trials.
MILAN (VN) — The 2016 Giro d’Italia route was accidentally made public Wednesday night, five days early. Organizer RCS Sport saw its crown jewel shown to all before it had intended to do so at the EXPO 2015 in Milan.
Italian website Cicloweb revealed that if one changed the date in the URL from 2015 to 2016 on RCS Sport’s Gazzetta website then the Ghiera or ring design of next year’s Italian grand tour would display.
VeloNews reached out to RCS Sport’s cycling division, but representatives did not respond in time for this article.
The 21 stages below show the first three in the Netherlands, which RCS Sport announced in June, the Chianti vineyard time trial it unveiled in September, and the Friuli-Venezia Giulia mountain stage released last week. Interestingly, the race will feature three different individual tests: a short opening time trial, the Chianti TT, and a uphill time trial in stage 15.
The remaining 16 stages were not meant for public consumption until 14:00 local time Monday in Milan when RCS Sport’s bosses, including cycling director Mauro Vegni, will officially release the 2016 route.
ASO, organizer of the Tour de France, made the same mistake in 2011 when its route briefly appeared on its website.
The leaked and still unofficial stages show the Giro heading north from Italy’s toe through the Campania, Abruzzo, and Umbria regions to reach Tuscany for the time trial and first rest day.
The big mountains begin with Corvara (Alta Badia) and continue through the Alps to the west into France for a stage to Risoul and Sant’Anna di Vinadio on the final weekend. Along the way, the cyclists will face a third time trial, an uphill test on the Alpe di Siusi. The race ends May 29 with a flat sprinters’ stage not in Milan, but in Turin.
In addition to the three time trials, the route offers seven stages for sprinters and one that reaches 234 kilometers. For the exact details, however, fans will have to tune in Monday.
2016 Giro’s leaked stages
Stage 1, 6 May: Apeldoorn (TT) 9.8km
Stage 2, 7 May: Arnhem-Nijmegen (sprint) 190km
Stage 3, 8 May: Nijmegen-Arnhem (sprint) 189km
Stage 4, 10 May: Catanzaro-Praia a Mare (rolling) 191km
Stage 5, 11 May: Praia a Mare-Benevento (sprint) 233km
Stage 6, 12 May: Ponte-Roccaraso (Aremogna) (mountains) 185km
Stage 7, 13 May: Sulmona-Foligno (sprint) 210km
Stage 8, 14 May: Foligno-Arezzo (rolling) 169km
Stage 9, 15 May: Chianti Classico Stage Radda in Chianti-Greve in Chianti (TT) 40.4km
Stage 10, 17 May: Campi Bisenzio-Sestola (mountains) 216km
Stage 11, 18 May: Modena-Asolo (rolling) 212km
Stage 12, 19 May: Noale-Bibione (sprint) 168km
Stage 13, 20 May: Palmanova-Cividale del Friuli (mountains) 161km
Stage 14, 21 May: Alpago (Farra)-Corvara (Alta Badia) (mountains) 210km
Stage 15, 22 May: Castelrotto-Alpe di Siusi (HCTT) 10.8km
Stage 16, 24 May: Bressanone-Andalo (rolling) 133km
Stage 17, 25 May: Molveno-Cassano d’Adda (sprint) 196km
Stage 18, 26 May: Muggiò-Pinerolo (rolling) 234km
Stage 19, 27 May: Pinerolo-Risoul (mountains) 161km
Stage 20, 28 May: Guillestre-Sant’Anna di Vinadio (mountains) 150km
Stage 21, 29 May: Cuneo-Torino (sprint) 150km
The post Giro d’Italia 2016 route accidentally leaked appeared first on VeloNews.com.