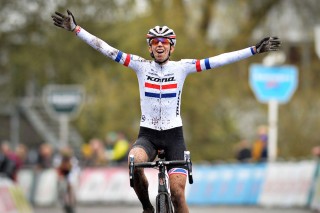 Helen Wyman wins the Flandriencross on Sunday. Photo: AFP
Helen Wyman held off Sanne Cant to win the Flandriencross on Sunday at Hamme.
The race was the third round of the Bpost Bank Trofee series.
Wyman (Kona Factory Racing) got the lead early and hung onto it on an exceptionally heavy, muddy circuit. Cant (Enertherm-BKCP) was chasing in second with Nikki Harris (Telenet-Fidea) third.
During the penultimate lap Cant closed on Wyman on one long muddy section that both women had to run. But shortly after remounting a mechanical set her afoot again, running to the pit. Losing second to Harris, the European champ took a fresh bike and launched a furious chase.
Cant caught Harris going into bell lap. The two could see Wyman just ahead. Then Cant took a slight advantage over Harris and went after the British champion.
Wyman had just eight seconds on Cant at the final barriers, but the Belgian lost ground again on the long muddy run, and Wyman hit the pavement with plenty of cushion to celebrate her victory. She won by eight seconds over Cant with Harris third at 24 seconds.
The British champ was delighted to win on a circuit that was “totally different than last year.”
“I just thought, ‘Ride hard, get a good start, and see what happens,’” she said. “I wanted to win. I haven’t had a win since nationals in January.”
Wyman said she knew from the roar of the crowd that it would be a close thing, even after Cant’s mechanical.
“For Sanne everyone goes wild. She’s Belgian. As the cheer was coming closer to me I could tell she was getting closer,” she said.
Jolien Verschueren (Telenet), who finished seventh on the day at 1:29 down, continues to lead the timed series in 2:08:50. Harris sits second at 25 seconds, with Cant third at 1:17.
Harris said she was happy to have made up some time on Verschueren on Sunday and hoped to continue cutting into her advantage with plenty of racing remaining.
“Hopefully I can keep gaining some seconds and win one of them,” she said. “I’m happy I could finish on the podium today.”
The next round of the Bpost Bank Trofee series will be December 5 at Essen.
Race note
Americans Ellen Noble and Emma White finished 12th and 15th, respectively.
The post Helen Wyman holds off Sanne Cant at muddy Flandriencross appeared first on VeloNews.com.