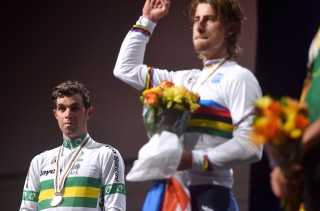 RICHMOND, Virginia (VN) — Michael Matthews was the clear winner in a sprint to the line Sunday in the world championship road race. Unfortunately for the 25-year-old Australian, it was the sprint for a silver medal. Slovakia’s Peter Sagan outfoxed the rest of the peloton with a powerful dig on the penultimate climb of the day, and put his blazing form and world-class descending skills on display holding off a charging pack to take the world title.
At the end of a tough 261.4km race, Matthews had the strength to come out on top of an impressive group of fast finishers, but his frustration at the narrow miss was readily apparent on his face after he crossed the line.
“I came here to win today, and I knew I had the legs to do it,” Matthews said. “But in the final, Sagan slipped away and he was really strong. Unfortunately we were sprinting for second place.
“I was obviously disappointed coming in as a favorite for the race, coming up second [while] still having a few teammates in the final. But that’s racing in the end. I did a perfect sprint and a perfect race, and the team did a really good job putting me into position for the final there. Unfortunately we came up just short.”
In the waning moments of the race, Matthews faced a tough decision. With Sagan, Belgium’s Greg Van Avermaet, and Norway’s Edvald Boasson Hagen off the front, Matthews could either wait for a potential sprint, or he could attempt to bridge the gap on his own. He chose option one, and was ultimately forced to play spectator as Sagan left Van Avermaet and Boasson Hagen behind and soloed to the win.
“It was a difficult one, whether I should try to jump myself or hopefully another team would try to close the gap,” he said. “I think I had a bit of a mark on my back today. Every time I seemed to move, everyone seemed to follow me.”
“I gambled on not attacking on the climb, waiting for the sprint. It’s hard to say now which way it would have gone if I did attack. But maybe there were still a fair few fresh guys there. They would have been able to follow me, so I think it was a good move to take a bit of a risk hoping someone else would close the gap, but unfortunately no one else did.
“It was a bit heartbreaking to see the jersey ride away like that.”
As much as the disappointment of missing out on a rainbow jersey will sting, Matthews has plenty to be happy about. The runner-up spot at worlds is the latest (and greatest) one-day result for Matthews in what has been a season full of impressive classics finishes. He has had plenty of success on the hillier stages of the Giro and the Vuelta over the past few years, but in 2015 he has consistently been in the mix in the big one-day races too, landing in the top three in Milano-Sanremo, the Amstel Gold Race, and the Grand Prix Cycliste de Québec.
“I’ve been on the podium in every single classic I’ve done this year except for Montréal,” Matthews said. “I’ve got to be happy with that. It’s a huge step up from last year. I got to be the leader in all the races this year. I showed that I could be around the mark this year. Hopefully next year I can go for the win in those races. “
The rider known as “Bling” would have certainly preferred wins in those races over second- and third-place finishes, but he did only just turn 25 the day before the world championship road race. That makes him the same age as the one person who beat him to the line in Richmond Sunday, Peter Sagan. Both riders figure to hang around for a long time among cycling’s premier talents, so Matthews should have plenty of opportunities to flip the script on Sagan in years to come.
The post In waiting for a sprint, Matthews gambled and lost appeared first on VeloNews.com.