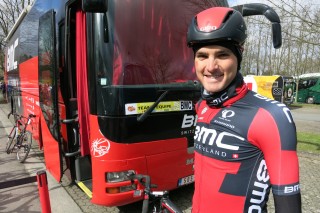 In his first year in the big leagues, Joey Rosskopf is taking his European experience to heart and looking forward to the Amgen Tour of California. Photo: Andrew Hood | VeloNews.com
GENT, Belgium (VN) — Getting thrown into the deep end. It’s part of the story of every young professional. Sink or swim.
Through his first two months in the treacherous European waters, BMC Racing’s Joey Rosskopf is doing more than keeping his head above water. And he hopes to make his own waves later this season.
“Until three weeks ago, I had never raced in Belgium, except as a junior. It’s been an adventure,” Rosskopf told VeloNews last week. “I’ve been trying to figure out [how] to save energy. I am trying to do something helpful in the race. When it gets hard, I get spit out the back, but I can help earlier in the race.”
The 25-year-old has been seeing some quality race days in Europe since joining BMC this season. He debuted at some French races in February, and spent most of March racing the bumpy Belgian roads, including the Three Days of De Panne, where VeloNews caught up with him last week. Now he’s at the Vuelta al País Vasco (Tour of the Basque Country), considered by many the hardest week-long stage race in Europe.
Rosskopf is diving in head first.
“That’s the goal, to learn, to race. I don’t think they’ve sent me here because they think I am going to win,” he said with a smile. “ I’m here to learn, to race, to get used to this style of racing. The task is to help.”
BMC picked him up following some big results on the North American circuit last year, including second behind Cadel Evans in a major climbing stage at the Larry H. Miller Tour of Utah, which helped him secure the climber’s jersey as well.
At 25, he’s not your typical neo-pro. He’s already raced four seasons in North America, with two seasons at Team Type 1 in 2011-12, and the past two years with Hincapie Sportswear Development Team.
BMC sporting manager Allan Peiper decided to take a chance on Rosskopf, comparing him to other pros, such as Lotto-Soudal’s Greg Henderson, who turned pro relatively late.
“It’s been a big jump for him, to go from racing in North America to Europe. He’s a big kid, at 24, and he’s at a point where we can throw him in, and he can survive,” Peiper said. “We’ll see how he can develop. It’s nice to have a challenge and think outside the box. He’s not like a 22-year-old, straight from the federation. He’s a bit like Henderson. At High Road, we gave him an opportunity, and he’s still racing at the top level. I think he has good potential.”
BMC sport director Jackson Stewart said the team considered Rosskopf’s extensive racing experience when mapping out his racing season in Europe this spring.
“So far, so good. He is a little bit older and a little bit more experienced and has more years riding his bike. So he is on the ‘accelerated plan’ when it comes to the WorldTour,” Stewart said. “He is a little bit smarter and maybe more physically adapted than a younger guy. He has stepped right in and has been able to ride at a good level to be a good teammate. He has also quickly figured out how to be a good teammate, what the guys need, and to do what the team asks of him.”
Last April, Rosskopf erased a 22-second deficit en route to winning the final stage and overall at the Redlands Bicycle Classic. Fast forward one year, and now he’s bumping shoulders with the likes of Nairo Quintana (Movistar) at the Basque Country tour this week.
“The biggest difference in Europe is the energy you have to use for positioning before you even get to the hard sections,” he said. “You have the cobbles and climbs written down, but half the time, those are almost easier than the 10km before them, just trying to stay at the front, because you use so much energy.”
Rosskopf has settled into an apartment in Lucca, Italy, where other Americans are also based. He won’t return to the United States until the Amgen Tour of California in May. With the recent injury to Peter Stetina, the team could be leaning on him even more.
“I think the Amgen Tour of California will be the perfect race for him. He will be motivated, he will be racing in his home country, and I see him racing it like he did last year,” Stewart said. “He is an opportunist. In the right races, he can be very dangerous in the break. Especially in California or maybe in Yorkshire. Last year, when we saw him at the Tour of Utah and the USA Pro Challenge, he would have been one of the strongest guys in the break, except we had a guy in there. So now he is racing for us, instead of against us.”
The post Into the deep end, BMC’s Rosskopf keeping head above water appeared first on VeloNews.com.

Velonews: Not All Frames Are Created Equal. A Look Deep Inside The Carbon In Counterfeit Bikes