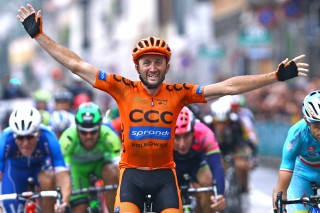 Davide Rebellin won Coppa Ugo Agostoni this year. Photo: Tim De Waele | TDWsport.com
Italian veteran Davide Rebellin continues to defy the odds, and has confirmed he will race in 2016 with CCC-Sprandi Polkowice.
The 44-year-old wrote on his Facebook page he has signed a one-year contract extension with the Polish team to enter his third decade as a professional.
“The heart has the final word,” Rebellin wrote on Facebook. “The body and mind are still ready for more battles. … Passion knows no age.”
Rebellin turned pro in 1992, and won a stage and wore the pink jersey at the 1996 Giro d’Italia. He developed into a top classics rider, and eventually swept “Ardennes week” in 2004.
In 2008, Rebellin hit rock bottom when he was stripped of his silver medal at the Beijing Olympic Games after testing positive for Micera, a banned blood booster. Rebellin served a two-year ban and returned in 2011. After bouncing around teams, he landed with CCC in 2013. He won the Giro del’Emilia in 2014, and the queen stage at the Tour of Turkey and the Coppa Agostini this year.
Rebellin will be the oldest active pro in 2016. Other riders well into their 40s, such as Chris Horner and Alessandro Petacchi, are already out of the frame, with Horner likely to retire after he’s been unable to find a new team, and Petacchi retiring following the Giro d’Italia.
The post Italian Davide Rebellin, 44, signs contract to race in 2016 appeared first on VeloNews.com.