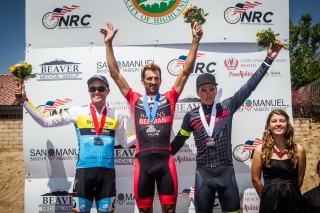 Sebastian Haedo (Jamis-Hagens Berman) won the first stage of Redlands ahead of Travis McCabe (SmartStop) and Dion Smith (Hincapie Racing). Photo courtesy of Team SmartStop.
Alison Jackson (Twenty16-Sho-Air) and Sebastian Haedo (Jamis-Hagens Bermans) claimed wins in the first stage of the Redlands Bicycle Classic, the Highland circuit race, held Wednesday.
Jackson won a sprint from a small group, coming across the line ahead of former national champion Mara Abbott (LA Sweat) at the finish of the 41.3-mile race, a hilly affair in the foothills outside San Bernardino, California. Brianna Walle (Optum-Kelly Benefit Strategies) was third.
“If you’re not patient enough you’re going to want to go at the bottom,” Jackson said of the final hill. “That’s what happened. People just shelled out the sides. You just gotta wait and wait. I did a good job staying in the pack just saving energy for that final, so then when it flattens out, just so you can see that finish line, that’s time to go, and it worked out.”
Not only was Jackson in her first race as a professional, she also had to overcome a crash suffered in the feed zone and a wheel issue later on.
However, she was patient in the finish, and as Abbott faded in the closing 100 meters, Jackson came on strong along the left barriers, driving to the line for her first pro win.
Haedo draws first blood
The men’s race saw action from the start with a number of different groups attempting to get away from the peloton on each three-mile lap.
About halfway through the 58.1-mile stage, a rider from Jelly Belly Pro Cycling and Astellas Cycling finally managed to escape from the peloton, creating a gap of 40 seconds quickly. Brendan Rhim (Cal Giant) bridged the gap across and then rode away from duo.
Rhim stayed away solo with a maximum gap of 1:25 until two laps to go.
“Hincapie hit the panic button with two laps to go because the break was at a minute,” said Travis McCabe (SmartStop), “They caught everyone off guard when they went, it was really fast, really hard and it split the whole peloton.”
Hincapie stayed on the front heading into the final turn where McCabe and his teammate Bobby Sweeting slotted themselves in behind eventual stage winner Sebastian Haedo (Jamis-Hagens Berman).
“I told Bobby to go, and he sprinted halfway up the climb and I hit out about three quarters of the way up the climb on the steepest section and opened a gap to Hincapie [team],” said McCabe
“Haedo came around right at the top of the hill and opened a five-meter gap, which wasn’t much but at that point everyone’s legs were done and we were all just trying to hold on.”
McCabe finished second, and Hincapie Racing’s Dion Smith was third.
The men’s and women’s races continue Thursday with the Big Bear time trial, a 7.8-mile test.