Velonews: Lars Boom Gets Back To cross This Winter 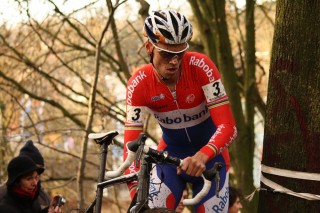 Lars Boom hasn't raced a major cyclocross race in three seasons, but he's coming back for six big races this winter. Photo: Dan Seaton | VeloNews.com (File).
After a three-season hiatus, Lars Boom is returning to cyclocross, the discipline that helped him break into cycling’s upper echelon. The Dutch Astana rider announced on Twitter that he’ll start with the Bpost Bank Trofee race in Antwerp on December 19. He hopes he’ll be selected to race World Cups #4 and #5 — Namur and Heusden-Zolder, both in Belgium. He’ll also race several other events during the Christmas Kerstperiode week.


Boom won under-23 cyclocross world championships in 2007, when they were held in Hooglede-Gits, Belgium. His meteoric rise continued in 2008, when he won the elite title in Treviso, Italy, beating Zdenek Stybar and Sven Nys.
However, the 29-year-old’s road career was recently clouded by controversy as a pre-Tour de France medical test revealed low levels of cortisol, which left his Astana team at loggerheads with the MPCC, a voluntary team association. The team let Boom race and was subsequently expelled from the group.
The post Lars Boom gets back to ‘cross this winter appeared first on VeloNews.com.