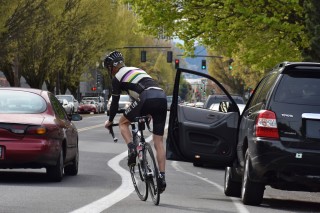 Bob Mionske recommends that, whenever possible, avoid riding in the 'door zone.' Photo: Pepper Mionske
The Door Zone. What do you need to know about the ‘DZ?’ Just three words: Don’t go there. If you remember anything from this column, that should be it. The DZ refers to the section of roadway that can be reached by a vehicle door opening, and many cyclists spend a lot of time in this serious sector of surprise.
Car doors are great for drivers but not so much for cyclists. Of course, if all vehicle occupants checked before flinging open their door, it wouldn’t be a problem, but that small safety measure is a bit Polyanna-ish. The lack of driver concern combined with a misunderstanding of ‘far to the right’ statutes and bike lanes painted smack dab in the middle of the DZ, known by some pundits as a ‘door lane,’ all unnecessarily contribute to ‘doorings.’
A ‘dooring’ is when a cyclist is taken out by an opening vehicle door. It is usually the consequence of misunderstanding what is required by far-to-the-right statutes (FTR), poorly designed infrastructure, scant driver education, and the bias of a car-centric society.
How did this happen? A brief history.
Cars are king in the U.S., but it wasn’t always this way. Before the advent of motor vehicles the roadways were populated by bikes. In fact, cyclists were responsible for paving the first roads in America
As motorized traffic took over, so many people were being injured by these large, fast-moving objects that the public demanded that motorists be held accountable. The automotive industry’s pushback to this justified outrage prompted a shift in the burden of responsibility away from drivers and onto those injured in what amounted to a declaration of supremacy of road rights for cars.
In the last 30 years, things have improved for other modes of travel besides motor vehicles, but the car-centric view of the rights to the road still exists, and nowhere is that more evident than when vehicle occupant ‘doors’ someone. If the careless act of mindlessly swinging open a large, fixed, metal gate directly in the path of a cyclist itself is not evidence of the cars-are-kings mentality, what often follows, in the way of a query, certainly puts a fine point on it. It goes something like this:
“Why did you ride into my door!”
Thankfully, the law is quite clear on doorings and the basic rule is that drivers and passengers exiting vehicles are required to open doors only after checking that it is safe to do so. This is no-brainer for cyclists but the motoring public, and sometimes, even the police see it differently.
Check your state’s dooring law here >>
Advice
The best advice is to avoid the door zone entirely, and many cyclists follow this decree as it isn’t always possible to verify whether parked vehicles have occupants. Flying along in the DZ is really playing Russian Roulette.
Some police officers mistakenly believe the law requires cyclists to ride as close to the right as possible. In reality, it dictates that cyclists do so only to the extent it’s safe. Most states have a law that requires cyclist to ride as far to the right as is ‘practicable.’ ‘Practicable’ does not mean ‘possible.’ I would replace that adjective with the phrase ‘as is safe.’ And riding in the DZ is NOT safe.
Many bike lanes are striped in the DZ and some states even have prejudicial mandatory bike lane usage laws.
Check your state’s law here >>
However, even in those states, there is an exception for safety and because it is impossible to know if an occupant may be about to open a door, I recommend avoiding DZ-striped bike lanes whenever possible. Bike lanes are not designed as containers for cyclists but, instead, intended to keep motorists out.
If you do enter the DZ
If you do end up riding in the DZ, vigilantly scan vehicles as you pass, and watch for the tell-tale sign of an occupant reaching for the door handle, Be prepared to come to a quick stop or, if possible, safely exit the door zone after checking that it is safe to do so. If you ride with a small bar-end mirror, you will already know if it is safe to move out of the DZ. Otherwise, check over your shoulder for traffic before exiting the bike lane. Ride in the section of the bike lane that is farthest from parked vehicles. It will give you some extra room to avoid unexpected doors and also improves your sight lines into vehicles.
Fixes
Infrastructure that discourages DZ riding is the best solution, as well as improved education of drivers about cyclist’s rights and the hazards of opening car doors. For instance, in Europe, drivers are taught to open their car door with their right hand which forces them to look over their left shoulder, thereby visually checking for bikes before opening their car door.
But until things improve, just remember, whenever it is possible, DON’T GO THERE!
The post Legally Speaking: The door zone appeared first on VeloNews.com.