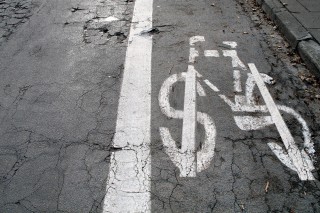 Who pays for the roads we ride? Bob Mionske explains that, even if you don't drive a car, you're paying more than your fair share. Photo: iStockphoto
“Cyclists need to start paying their share for using the roads!”
This is a common refrain from bike haters — but guess what? We already do pay our share, and then some … More on that later. The comment is often part of a three-pronged argument: Until you are licensed, insured, and pay a road tax, you should not be on the road. This “road tax” prong of the argument is one of the easiest to refute, as it is demonstrably wrong. Of course, these arguments are not offered in fair play as solutions to problems. They are attacks against what some in the motoring public see as competition for their space on the road. Maybe they are tired of being held up for between zero and 10 seconds on their way to stand in line at the bank or store, or maybe they don’t like you riding by all free and easy. Whatever the case, you should be ready to let them know that, as a cyclist, you do pay your way and then some, as my friend Ellie Blue explains. It boils down to this: The user fees a motorist pays throughout the year don’t cover the amount actually needed for building and maintaining automobile infrastructure. This means that automobile infrastructure must be subsidized, with the needed funds coming from the general fund (meaning from all of us).
Cyclists pay into that fund equally, but biking does not cause the same wear and tear and does not incur the same costs to the roadway. Bottom line, if you ride and don’t drive, you are subsidizing motorists while they are on the roadways. If you do own a car but don’t drive much, you are subsidizing the other motorists. Motorists are getting a free ride. Bikers are not.
The math behind how the roads are paid for (here are the basics) is important for every cyclist to know — especially roadies, as we greatly benefit from use of the roadways and are often the most identifiable cyclists. We have an obligation to represent and defend our mode of travel and act as ambassadors for all cyclists. And if you know the math, the next time you hear someone complain about cyclists getting a free ride, you can straighten them out.
However, even if the math didn’t come out this way, even if bikers were ‘getting a free ride,’ what would be wrong with that? Society should encourage activities and behaviors, including modes of travel, that are a positive to life. Biking does not cause enormous externalities (eg., pollution, deadly collisions, foreign wars for oil control). Biking is good for traffic safety, the environment, communities, and the health of those who ride. Biking should be encouraged and, yes, I’d have no problem seeing it subsidized.
As it is, our choice of vehicles gets a pittance of the transportation budget and is constantly in the crosshairs of reactionary politicians. And it’s not just use of the roadway that is at issue, because the roadways are built upon the commons. This land belongs to the public. The fact that, at this point in time, it is mostly dedicated to motor vehicles is not evidence that the roads are for cars. If anything, it might point to a rental agreement — one that is massively subsidized by the general public, not paid for by the motoring public. But it gets even more ridiculous. The average cyclist, who does not destroy and degrade the road or cause massive externalities such as pollution and illness, actually pays more than he or she receives in road use. Of course, I own a car too. I am fortunate in being able to leave it mostly parked, but I realize others depend on their motor vehicle for their living and to support their family and as a way to travel out of necessity as well as pleasure. But pointing out the massive inequities underpinning how the commons are used is not demonizing motorists; it is simply exposing a false argument and revealing a truth that boils down to this: Cyclists, like pedestrians, have a constitutional right to travel. I would call it a fundamental human right supported by a constitutional right.
If we cannot move about on the commons unencumbered, where would freedom of movement occur? Of course, this is a philosophical as well as practical question. But the important part for a roadie to remember that it is our road too — and we are already paying our fair share and more for the road.
The post Legally Speaking with Bob Mionske: Do cyclists pay their fair share? appeared first on VeloNews.com.