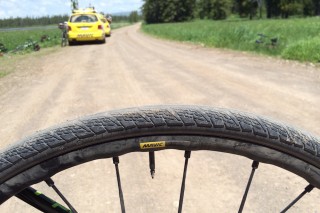 The tread pattern on the Yksion Allroad tires is smooth in the center with siping on the side that offers a rather smooth ride on pavement and predictable handling on the dirt. Photo: Spencer Powlison | VeloNews.com
JACKSON HOLE, Wyoming — We were a very long way from Annecy, France, barreling along a remote, gravel, U.S. Forest Service road on the border between Idaho and Wyoming. But it seemed like a purposeful choice on Mavic’s part to unveil its Ksyrium Allroad wheel/tire system in this very un-French locale, over the course of more than 70 miles of riding — almost all on rough gravel.
Mavic has finally bought into the trends borne from events like the Dirty Kanza 200 and countless other mixed-surface road events. Its new wheels have wider rims and are designed for an array of rough roads.
On this particular hot, dusty day in the Northern Rockies, we were riding its Ksyrium Allroad wheels and Yksion Elite Allroad tires. However, change has arrived in all corners of the Ksyrium line, from its feathery Ksyrium Pro Carbon, all the way down to its affordable Ksyrium Elite.
Across the board, Mavic — a company known for narrow rims — is going wider for its entire Ksyrium line.
The new road clincher rims have a 17mm inner width, which includes the Ksyrium Elite, Pro, and Carbon SL models. The disc-only Allroad wheels have 19mm-wide rims.
To match the wider rims, Mavic offers a host of its Yksion tires, which seem to be gradually improving in overall performance. Mavic engineers were quick to emphasize the importance of adhering to ISO standards when pairing rim and tire widths. Hence, it does not recommend tires narrower than 25mm for its Pro Carbon SL, Pro, Ksyrium, or Aksium wheels. The Allroad wheels are intended for tires from 28-42mm wide.
All five of those wheels will also be available for disc bikes (the Allroad is only a disc wheel), with 24 spokes in the front and rear as well as interchangeable axles for quick-release, 12mm, and 15mm standards.
The last significant update, only found on the Pro Carbon SL and Allroad wheels, is Mavic’s new Instant Drive 360 freehub. Gone are the three spring-loaded pawls that require frequent lubrication. The new ratchet has two interlocking rings that Mavic says results in engagement every nine degrees, a significant improvement over the FTS-L steel units.
First ride
We spent two days in the saddle riding Mavic’s new wheels. Though the Pro Carbon SL rims have been treated with a laser-machined brake track that does improve braking power, that wheelset is not as radically different as Mavic’s previous offerings, such as the Cosmic Carbone 40.
Yes, the Carbons were feathery and capable as we suffered up Teton Pass, but let’s return to the dusty backroads of the Targhee National Forest to consider the new Allroad wheels and tires.
Whether or not you’re willing to apply the “gravel grinder” moniker, this ride was quite unique — remote, rugged. Our French hosts were rather concerned about bears, but on the bike, we were preoccupied with picking the smoothest lines through rocks and ruts.
The Allroad wheels afford the solid stiffness that the Ksyrium line is known for. This seemed advantageous on loose, rough corners as we fought to hold a line.
The Yksion Elite Allroad tires held up their end of the bargain, offering confident grip and predictable drift, despite lacking any notable knobs. However, our experience with these tires was not entirely convincing. Though the 30mm, 320-gram Yksion Elite Allroads are equipped with nylon casing reinforcement and were set up tubeless with sealant, we managed to flat both front and rear tires on separate occasions. The rear was a sidewall slash; the front, a large cut in the tread. The best sealant in the world wouldn’t have a chance in either circumstance.
When asked about the flats, Mavic brand manager Chad Moore said, “Without being able to recreate the situation we think there might not be a tire existing that would have held up to that impact, but of course it’s hard to say. On the puncture, I think on some level, it comes down to luck or chance. We had 30 people on the wheels and there might have been 4-8 flats in total. When you consider the terrain, the level of riders (many inexperienced on rough surfaces) and that we had 60 wheels out there for five hours … It’s not a terrible outcome.”
Were we riding a bit fast, a bit recklessly? Perhaps. Do flats happen randomly? Definitely. However, we had very good luck riding Clement’s USH tire on similar terrain last summer and didn’t suffer flats from cuts like these. It’s hard to know how much of this comes down to chance as opposed to tire construction.
The bottom line
It’s tough to say how the Allroad wheel/tire system fits into the cycling world. Some people, who have bikes like the Cannondale Synapse we rode, could choose them as an upgrade. We’re also told that the Allroads may come stock on a number of 2016 bikes.
Would they be a good upgrade for a cyclocross bike? Sure. Certainly the updated hub internals are encouraging for those of us who like to get muddy.
In either case, more choice is good, but we do have reservations about the durability of the Allroad tires.
Ksyrium wheel specs
(All prices include tires)
Elite: 1,550g, $800
Pro: 1,475g, $1,100
Pro Carbon SL clincher: 1,390g, $2,200
Pro Carbon SL tubular: 1,190g, $2,400
Pro Allroad: 1,620g, $1,250
Pro Carbon SL clincher disc: 1,520g, $2,200
Pro Carbon SL tubular disc: 1,320g, $2,400
Editor’s note: Mavic provided travel and accommodations for this product launch.
The post Mavic launches wider rims in Wyoming’s wide open spaces appeared first on VeloNews.com.