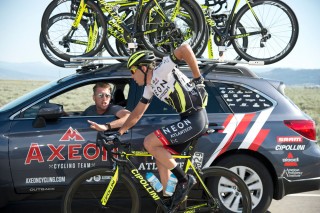 Axel Merckx has found his calling as director of one of the most successful development teams in cycling today. Photo: Casey B. Gibson | www.cbgphoto.com (File).
PARK CITY, Utah (VN) — Axel Merckx was leaning against a team car late Sunday morning, arms crossed. His mirrored sunglasses and square jaw made him look menacing, like a no-nonsense cop or an Arnold Schwarzenegger movie character.
But an hour before the final stage of the Tour of Utah, the director of the Axeon Cycling Team was relaxed, his usual easy demeanor a reflection of his team’s successful week of racing.
Axeon’s Logan Owen, 20, the 10-time cyclocross national champion from Washington, maneuvered through the field on the long straightaway in Bountiful to claim his first-career pro road win in stage 3 from Antelope Island State Park.
Greg Daniel, 21, the Colorado rider who last season had a runner-up stage finish in the Tour of California, began the final stage as the mountains classification leader, and he went on to win that title.
Merckx, 43, is in his seventh season as a team director. His forte is developing riders.
With the race’s final stage pending, Ben King had just left after an extended chat. Merckx related that the Cannondale-Garmin rider said he had a fun time several years ago when he rode for Merckx on the Trek-Livestrong team.
“It’s the world that you know,” said Merckx, who retired from pro racing in 2007. “That makes the transition a little easier. But there’s a whole other side of the sport you don’t know. I never really thought about something like this until the opportunity came, especially with the young development guys.
“Now, it’s kind of an oiled machine a little bit. But I had to learn a lot of things. Basically, the behind-the-scene things, the organization and sponsorship and the deals and to try to get the best program. But it’s an easier transition because it’s your world, and it’s what you know, and it’s your passion.”
Merckx, a father of two who lives in British Columbia, didn’t end his career with any notion of becoming a director. But when the opportunity arose via his relationship with Livestrong-Trek, the former Belgian national champion and Giro d’Italia stage winner, was willing to guide developing cyclists.
“This is the transition between fun and racing hard,” said Merckx. Those guys [WorldTour] race more, and they race hard. We race hard, but we don’t have that pressure. The only pressure we have is the pressure they put on themselves to make it to the WorldTour.
“Every generation is a little bit different, but it’s more the personality of each team that changes. You can’t compare a Joe Dombrowski with a Taylor Phinney. It’s different — a different mentality and a different personality. But it’s complementary. It’s kind of nice to pick up a rider at a very young age and see them develop physically, mentally and emotionally through the years.”
Chris Putt, 21, whose older brother Tanner, 23, rider for UnitedHealthcare, embraces Merckx’s guidance as second-year rider with Axeon.
“He’s great,” said Putt of Merckx. “From a development rider’s perspective, you couldn’t ask for a better personality. We have so much respect for him for what he’s done in his cycling career.
“He basically just knows. He instinctively knows. He doesn’t put a ton of pressure on us. He knows what we are capable of. He trusts us enough to make our own calls, but he can also push us in the right direction.”
Career beginnings aside, Merckx’s riders all know of their director’s famous father, Eddy Merckx, cycling’s greatest rider. The elder Merckx, 70, the five-time Tour de France winner, is not active with his son’s team. But he is an influence.
“I still talk to him once in awhile,” said Axel Merckx. “I spoke with him yesterday after the stage. He was watching it on Tour Tracker. It’s a little bit delayed [in Belgium], so he wanted to know what was going on.
“He’s involved, and I ask him questions, little things here and there. But overall, he’s more of a fan. But he’s backing me up if I need his help. That makes it nice and easy.”
The post Merckx’s Axeon team: Have fun, race hard appeared first on VeloNews.com.