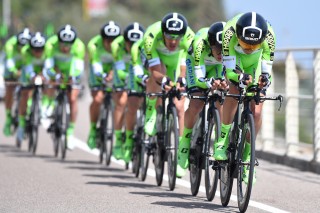 According to the MPCC, one Bardiani-CSF rider should not have started the Giro d'Italia, due to low cortisol levels, but the Italian Pro Continental team raced all of its riders in the stage 1 TTT in Sanremo. Photo: Tim De Waele | TDWsport.com
While LottoNL-Jumbo was quick to remove George Bennett from its Giro d’Italia team one day prior to the race, due to low cortisol levels, Bardiani-CSF skirted the rules of the voluntary Movement for Credible Cycling (MPCC) ahead of the season’s first grand tour, according to an MPCC press release issued Wednesday.
The statement did not specify which rider was in violation of the MPCC’s rule. But it read, “As of this Friday prior to the start of the Giro d’Italia, MPCC has formally requested to the team Bardiani-CSF — through its president — not to enter this rider into the race and to prescribe eight days off-race as from the date the sample was taken by the UCI, in accordance with article 9 of MPCC regulations and its annex.”
However, speaking to AFP, Bardiani’s team manager, Roberto Reverberi, said Wednesday that the rider in question took the start of the Giro presenting values ​​perfectly in order for the UCI. He added that, according another test done the next day, the stage 1 team time trial, “all values ​​were normal.”
Although the rider’s physical check may not have violated UCI rules, the MPCC holds teams to a higher standard, and Bardiani is a member of that voluntary organization.
The MPCC has asked the second-division team’s manager to attend the June 8 meeting of the organization’s board of directors in Lyon, France to explain the case.
Bardiani-CSF notched its first win of the Giro on Tuesday with Nicola Boem in stage 10.
The post MPCC criticizes Bardiani for starting Giro with suspicious rider appeared first on VeloNews.com.

Velonews: Mpcc And Teams In Standoff Over Cortisol Rules