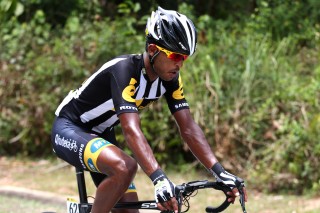 With only sprinter Caleb Ewan ahead of him on GC as the Tour de Langkawi peloton prepares for a hilly penultimate stage, Natnael Berhane has positioned himself well for a run at the overall title. Photo: Tim De Waele | TDWsport.com
KUALA LUMPUR, Malaysia (VN) — 27 seconds will separate South African-based UCI Pro Continental team MTN-Qhubeka from the general classification lead at the 20th Tour de Langkawi (2.HC) when the six-man team rolls to the start of the race’s penultimate stage in Shah Alam.
While the team’s first guard is in Italy racing Tirreno-Adriatico, including newly-signed Edvald Boasson Hagen, Tyler Farrar, and Matthew Goss, the second unit is in Malaysia with five riders within 36 seconds of race leader Caleb Ewan (Orica-GreenEdge).
After six stages the race enters the queen’s stage on Saturday and features two categorized climbs, including Bukit Cerakah (Cat. 4) inside the first 20 kilometers and the summit finish atop Frasier’s Hill (Cat. 1) at the 180.8km mark.
Currently, MTN-Qhubeka teammates Natnael Berhane of Eritrea and Youcef Reguigui of Algeria sit just behind 20-year-old Australian sprinting sensation Caleb Ewan, with Barhane 27 seconds back on GC and currently second overall, and Reguigui currently third and 30 seconds back. Ewan has already won two stages and pretty much locked up the points classification, though he is not expected to keep the yellow leader’s jersey on the summit finish.
“We have five riders in very good position to contend at the moment,” said MTN-Qhubeka sports director Michel Cornelisse. “We have Number 2 and Number 3, but also the others are very close by.
“Everything happens tomorrow and hopefully this day is hard enough for us because we have a very strong team for the climbs.”
Joining Berhane and Reguigui in contention are last year’s race runner-up Merhawi Kudus, 2010 Tour of Rwanda winner Daniel Teklehaimanot, and reigning South African road race champion Jacques Janse van Rensburg.
When asked which of his riders stands the best chance to challenge for the podium in the remaining 123-rider field in a race featuring 22 teams, including four WorldTour squads (Orica-GreenEdge, Team Sky, Tinkoff-Saxo and Astana), Cornelisse provided a diplomatic response.
“We want to try to keep the control in the race, because like I said we have five riders in good position,” he said. “For me it’s no problem who wins, if it’s one of my team then it’s okay.”
However team sprinter Reguigui, who currently sits third in GC 30 seconds back of Ewan, is quick to throw his support to Berhane on stage 7.
“I do my sprint like every day,” said the 25-year-old Reguigui who finished second to Ewan on stage 3, which also featured two categorized climbs. “But tomorrow’s stage will be hard, and since I am not a climber I offer my help to Natnael.”
Frasier’s Hill (1150m elevation) was a last minute replacement for the infamous Genting Highlands the day before the race due to safety concerns arising from construction work surrounding the area.
“All the riders were waiting for the Genting from the start,” Berhane told VeloNews. “But the Genting is not there so maybe tomorrows race on Frasier’s Hill will be a good race for us also.”
Due to the late route change, the riders know little of the climb that was last used in 2008 when Italian Filippo Savini won the stage riding for Ceramica Panaria-Navigare.
“We will see what happens before the last stage,” continued the 24-year-old national time trial champion (2014) and two-time African Continental road race champion (2011 and 2012). “I feel good about my form and I am looking forward to the climb.
“We brought a strong team to Langkawi, the other riders on the team are good climbers and we look to make good results for GC tomorrow.”
Following Langkawi and Tirreno, MTN-Qhubeka will race Milano-Sanremo, Gent Wevelgem, and Paris-Roubaix en route to becoming the first African registered team in history to race the Tour de France in July.
“Success at this race is very important for the morale of our team,” said Cornelisse. “It’s a hors catégorie race and it’s not so easy to win a race like that.
“All the big teams are here, many of which we will race against many times this year, and if we win we are very proud.”
Aaron S. Lee is a cycling and triathlon columnist for Eurosport and a guest contributor to VeloNews.
The post Natnael Berhane in driver’s seat for GC result at Tour de Langkawi appeared first on VeloNews.com.